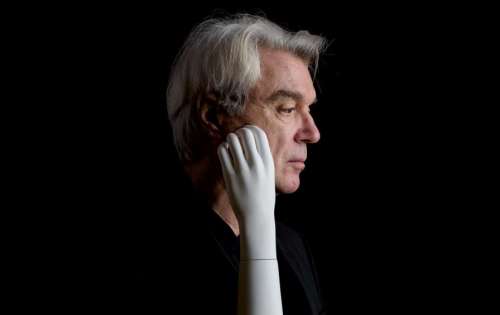 What’s more primal than singing to the dead? “I sing to you, Geneviève / I sing to you / You don’t exist / I sing to you, though”: So begins Now Only, the ninth album that Phil Elverum, the 39-year-old multi-instrumentalist, has recorded under the name Mount Eerie. Geneviève did exist, once, as Geneviève Gosselin, and then as Geneviève Castrée, an accomplished artist and musician, and finally as Geneviève Elverum, before her death in 2016, at age 35, from pancreatic cancer; she was diagnosed just four months after the couple’s only daughter was born. Death changes things for the living left behind, and though that’s an easy observation to make, it’s much harder to live with, there in the aftermath when everything’s changed.

Now Only is remarkable for many reasons, not least because it’s a sequel to 2017’s A Crow Looked at Me, a spare, beautiful album that Elverum wrote in the days immediately after Geneviève’s death. “Death is real / Someone’s there and then they’re not / And it’s not for singing about / It’s not for making into art,” went the opening lines of “Real Death,” the album’s first track. Like Now Only, the rest of the album was similarly devastated and lean, filled with the kind of observations that can’t be understood until you’ve experienced a death in the family. Put next to each other, what’s astonishing about both albums is how Elverum is able to make his raw grief legible.

David Byrne’s American Utopia—the legendary musician’s first solo album in 14 years—offers an expansive and ambitious contrast to Elverum’s intensely focused minimalism. “In another dimension / Like the clothes that you wear / A mighty mighty battle / Sprouting illegal hair,” he sings in the first lines of “I Dance Like This.” “A fitness consultant / In the negative zone / Wandering the city / Looking for a home.” The words are set to fat, plunky chords that lift up Byrne’s signature warble, until about 50 seconds in, when it’s clear something has gone wrong. As he reaches the chorus—”I dance like this / Because it feels so damn good / If I could dance better / Well, you know that I would”—the song shifts into a techno-futurist breakdown, something that wouldn’t have sounded out of place in the 1980s. While the lyrics are ambiguous enough to project any meaning onto, it’s the music that’s the real trial here. Nearly all of American Utopia is like this: Byrne has something to say, but it’s not clear that he knows what that might be.

On “Every Day Is a Miracle,” a grooving island-fusion mélange that feels as though it’s been beamed in from a rural state fair in the ’90s, Byrne theorizes about desire:

On “Every Day Is a Miracle,” a grooving island-fusion mélange that feels as though it’s been beamed in from a rural state fair in the ’90s, Byrne theorizes about desire:

While I’m not sure what a donkey’s dick has to do with why a person might want another person, the song does bop. The deeper issue here, one that cuts across every song on American Utopia, is that Byrne’s cryptic songwriting fails to meaningfully address his chosen subject: America as utopia, as a place worth writing paeans to. Here, the chorus to “Every Day Is a Miracle” is instructive. “Every day is a miracle / Every day is an unpaid bill / You’ve got to sing for your supper / Love one another,” it goes, apparently without irony. That’s a fine sentiment, but it has very little to do with the world we live in.

There’s a naïveté on display that I’m sure Byrne is putting on for show, but it falls flat amid phenomena like the Trump-emboldened white-supremacist movement, the package bombs targeting minority communities in Texas, and the school shooting in Parkland, Florida, that killed 17 people. This is an album more suited to the late ’90s than to today, which really comes into focus on “It’s Not That Dark Up Here,” a song that’s seemingly meant to question received wisdom. “Does winter follow spring / Like night follows day / Must a question have an answer / Can’t there be another way?” Byrne asks plaintively, playing it straight. “Would you like to talk about it / Would you like to pull my hair? / Plants have roots / But I don’t know if they’re deep enough to make me stay.” Metaphor and allusion only work when it’s clear everyone has a sense of what you’re talking about. There are occasional flashes that penetrate Byrne’s intentional obtuseness, such as on “Everybody’s Coming to My House,” the album’s penultimate track: “We’re only tourists in this life / Only tourists but the view is nice / And we’re never gonna go back home…. No, we’re never gonna go back home.” But more often, the listener just feels completely lost.

Now Only, on the other hand, knows both what it’s about and who it’s for. In both its straightforward telling and its emotionally resonant songwriting, Elverum’s latest work—a masterpiece—recalls the 16th-century Polish poet Jan Kochanowski’s Laments, which he wrote after his 2-year-old daughter died. “And help me mourn my sweet, whom in her May / Ungodly Death hath ta’en to his estate, / Leaving me on a sudden desolate,” the poet writes in his first lament. “’Tis vain to weep,’ my friends perchance will say.” Compare that to this passage from Elverum’s “Two Paintings by Nikolai Astrup,” which is more elliptical but says much the same thing about the writer’s emotional state after a devastating loss:

I’m flying on an airplane over the Grand Canyon
Imagining strangers going through the wreckage of this flight if it were to crash
And would anyone notice or care gathering up my stuff from the desert below?
Would they investigate the last song I was listening to?
Would they go through my phone and see the last picture I ever took
Was of our sleeping daughter early this morning
Getting ready to go, and I was struck by her face
Sweet in the blue light of our dim room?

Then he snaps out of his morbid fantasy:

And I know that’s not how it would go
I know the actual mess that death leaves behind
It just gets bulldozed in a panic by the living, pushed over the waterfall
Because that’s me now, holding all your things….

He’s the one still alive, he realizes—and it’s hard to tell whether he’s ambivalent about that fact, or astonished at the absurdity of it.

Across both A Crow Looked at Me and Now Only, Elverum is obsessed with thresholds, with bones, dust, water, birds, nature itself. Foxgloves recur throughout his albums, the “first flowers that return to disturbed ground / Like where logging took place / Or where someone like me rolled around wailing in a clearing,” as he sings on “Two Paintings.” On A Crow Looked at Me’s “Seaweed,” foxgloves are an occasion to remember:

What about foxgloves?
Is that a flower you liked?
I can’t remember
You did most of my remembering for me
And now I stand untethered in a field full of wild foxgloves
Wondering if you’re there
Or if a flower means anything
And what could anything mean in this crushing absurdity?

Grief, he’s saying, does strange things to the mind—it becomes hard to remember who you were before you were stranded, alone. Whereas A Crow Looked at Me was about the immediacy of grief, and coming to terms with how it crowds nearly every other feeling out, Now Only deals in the ambiguity of autobiography: Elverum goes searching in the story of him and Geneviève, though he understands the danger therein. In the album’s title track, Elverum elaborates:

As my grief becomes calcified, frozen in stories,
And in these songs I keep singing, numbing it down,
The unsingable real memories of you
And the feral eruptions of sobbing,
These waves hit less frequently.
They thin and then they are gone.
You are gone
Then your echo is gone
Then the crying is gone
And what is left but this merchandise?

There’s no answer, but of course Elverum isn’t looking for one. Meanwhile, the music on “Now Only,” as on the rest of the album, is mostly strummed guitars under Elverum’s soft, evocative talk-singing. The songs are long; only one is under five minutes. And while they’re quiet, it’s hard not to hear the album as a sustained, 43-minute scream. Elverum has seen everything, and even now he can see Geneviève’s bones:  “You’re still out there / In the spring upheaving,  / Coming out of the ground, into air.  / Is that exact fragment your finger that once caressed me?  / Not that long ago,  / I still can feel it.”