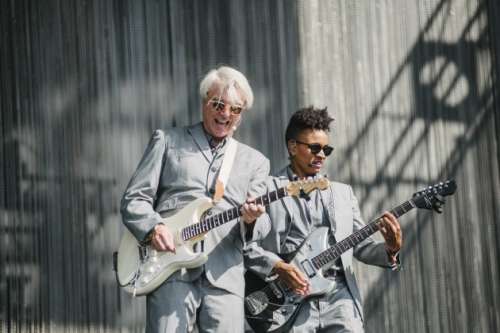 So…who recommends this stuff to me?
Bobby Wooten who toured with me recommended Hobo Johnson.
Artist and musician Terry Allen recommended Fabrizio de Andre.
I heard an orchestral interpretation of this song by Gurrumul when I was waiting to do an interview at the radio station in Melbourne, Australia. I asked, “Whose music is that?”
Laura Mvula, Topaz Jones and Agnes Obel played shows with me this year.
Erkin Koray I heard after first hearing Barış Manço, who may have been recommended by some friends in Istanbul when I was there years ago…Turkey had a serious psychedelic period.
Rachid Taha sadly just passed away. He was ubiquitous for a while there—flavors and songs from the Maghreb and the immigrant experience with a rock and roll attitude. Many of his best records were produced by Steve Hillage, from the psychedelic band Gong…a surprising combo, to me anyway.

You can listen to David Byrne’s “Ecclectic for the Holidays” playlist here.

In other news, David Byrne’s directorial debut, 1986’s True Stories, is out now on Blu-ray and DVD via The Criterion Collection, and the complete soundtrack is out on vinyl and CD. True Stories screens in NYC this week, too.

David wrapped up his American Utopia tour earlier this year and is mulling over the idea of bringing it to Broadway.