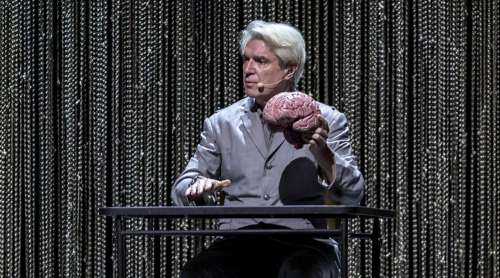 In an interview with himself, David Byrne once said “music is very physical, and often the body understands it before the head”.

In the interview, a DVD extra for Stop Making Sense, the Talking Heads frontman was explaining why he wore the “big suit”, the comically oversized grey suit that became the touchstone of the widely-celebrated 1984 concert film.

This new tour, which comes on the heels of David’s latest record American Utopia, purposefully echoes many elements of Stop Making Sense and the suit is no exception. It is no longer ludicrously large in size, but instead it has multiplied. All twelve members of the band are shoeless and wearing the same suit. The American Utopia uniform.

Like its predecessor, this show starts with David alone on the stage. An austere stage, without instruments, musicians, cables, mic stands. There’s none of the regular stuff you would expect to see at a concert. Instead, there is a curtain of chains lining the rectangular stage, and in the centre is a chair and table. On top of the table is a plastic brain. It’s with this prop he performs ‘Here’, the closing song from American Utopia. This scene is like a missing piece of a puzzle, the lyrics and visuals sliding together and everything clicking into place.

The band joins David on stage, each member carrying their own instruments. Half a dozen percussionists, who constantly change instruments depending on the song, guitarists, bassist, keyboard player - for the whole show they perform the beautifully angular choreography by Annie-B Parson while wearing their instruments. This organised movement is cleverly augmented by the camera work displayed on two large screens either side of the stage.

While American Utopia is at times an clumsy album, songs from the record interweave perfectly with classic Talking Heads songs. The audience is understandably excited to hear tracks like ‘Once In A Lifetime’ but also newer songs like semi-industrial banger ‘I Dance Like This’. And the band seem just as happy to be performing them alongside David, whose dance moves are the jittery flourishes of an exotic bird.

The show is relatively seamless, and David only stops a few times to talk awkwardly to the audience. He tells the crowd he had a lovely bike ride down Oriental Parade that day. And later, he ensures everyone that “everything you hear coming off stage is being played by these incredible musicians” and there’s no backing tracks, which is apparently the answer to a question he gets asked a lot. And it’s easy to see why, at times it seems like there’s no way those people on stage could be making those sounds, like when they play ‘Dancing Together’, a track he recorded with Fatboy Slim.

Throughout the show there are further nods to Stop Making Sense, small ones. For a short moment David recreates the running-on-the-spot dance move he famously carries out in the film. And, while singing ‘Bullet’, he performs alongside a simple lamp, which also feels very familiar.

More importantly, the same sense of joy seen through the television screen has been brought to life. It’s rushing electric through the air and prickling arm hairs. The feeling of being so happy your heart might explode. The feeling of wanting to move. This is the body, understanding the music better than the head.

American Utopia exists for this reason. The record’s genesis came when Obama was on his way out of the Oval Office, and Trump was edging his way in. Byrne sought to celebrate small things and be optimistic, despite political and environmental problems across the globe. The album itself encompassed in a larger project entitled Reasons To Be Cheerful.

That’s not to say it’s shallow or without thought. But as always, David puts it in your hands to dig deeper and discover meaning. For the second encore, the show is punctuated by a cover of Janelle Monáe’s track ‘Hell You Talmbout’, and he tells the audience, if you don’t know the names in the song “Google it up”. It’s a stirring end to the show and a powerful place to leave it.

Click on the images below to view more of Bruce Mackay's snaps of the show...