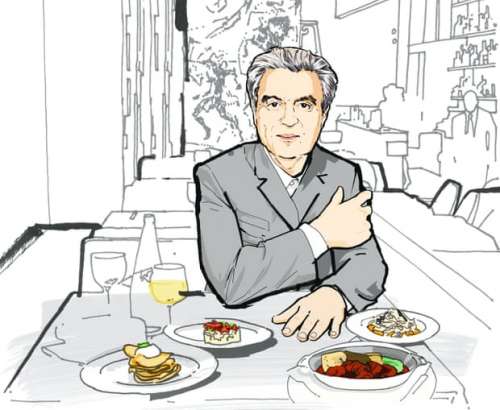 Considering he once made an album called More Songs About Buildings and Food – the second Talking Heads record, released in 1978 – it feels fitting to meet David Byrne in an arresting new tower in Milan designed by the acclaimed Dutch architect Rem Koolhaas. Whenever Byrne arrives in a city, even if it’s only for a few hours before a show, the 66-year-old musician likes to see some culture, grab something interesting to eat and ride his bike. Going to Ristorante Torre, which is sandwiched between six floors of Hirsts, Koons and Höllers belonging to Miuccia Prada and her Prada Foundation, ticks all those boxes.

Byrne arrives on a canary-yellow rental bicycle (his fold-up is on the tour bus en route from Spain). He started cycling in New York in the late 1970s when it was the preserve of “loners, losers, maniacs and nerds”. The other members of Talking Heads used to make fun of him, calling him Pee-wee Herman, after the dorky TV character, but on the current tour he has subsidised a small fleet of fold-ups and many of his band join him on his excursions.

It’s a muggy day and the Prada Foundation – a campus of buildings old and new, including one clad in gold leaf – is a little more than three miles from central Milan, in a pre-gentrified, industrial part of the city. Byrne parks his bicycle, his face and neck glistening with perspiration. He has a big wave of unruly, Warholian white hair, and wears smart clothes in a slightly scruffy way. Much as Talking Heads have never really been unfashionable, he seems to have aged indecently well.

Miuccia Prada wants to say hello and she materialises wearing something metallic and wonderful, closer to architecture than fashion. We take a table in Bar Luce, a 1950s-style cafe inside the Foundation designed by Wes Anderson. The film director hoped the cafe would not look exactly like a movie set, more a place that you would sit and write a movie screenplay, but with its jukebox, Formica tables and elegantly garbed barmen rattling cocktail shakers, it could function well for either.

Over shakeratos – espresso, ice cubes and syrup – Byrne and Prada talk about the joys and complications of collaborating. Byrne tells her that they met once before, very briefly, about a decade ago, at the opening of a show by the photographer Cindy Sherman, who was then Byrne’s girlfriend. When Prada leaves and we walk to the new tower, he laughs. “It’s one of those things that fans say to me: ‘I met you that time …’ And you’re like, ‘Oh-kay, right.’”

We have a quick scoot around the art. “What’s his obsession with mushrooms?” Byrne asks, as we stand under a Carsten Höller piece called Upside Down Mushroom Room, where huge, red and white fungi hang from the ceiling. “Did he do a lot of drugs?” There’s more to see in Ristorante Torre when we finally sit down for our lunch. One wall is gradually filling up with decorated plates commissioned from artists such as John Baldessari, Mariko Mori and Thomas Demand. There’s a tradition in Italian restaurants where you go for a fancy meal and at the end take your plate away with you. This is Miuccia Prada’s nod to that: “But you can’t take the plate home,” clarifies the maître d’.

It’s a Monday lunchtime and the restaurant isn’t supposed to be open, but being David Byrne has its perks and a skeleton staff has come in specially. There’s something a bit odd about sitting in an otherwise empty restaurant, like being royalty or the Beckhams. As we recline on banquettes that were originally made for Phillip Johnson’s Four Seasons Restaurant in New York (acquired by the Prada Foundation at auction in 2016 ), Milan stretching out in front of us through floor-to-ceiling windows, both of us concede we’ve had more arduous assignments.

“My booking agent said I’m having a Leonard Cohen moment,” says Byrne, before clarifying that he’s talking about the longevity of his career. “At the concerts the feedback I get now is that younger members of the audience don’t know which songs are old and which ones are the new ones. I like that.”

Life is certainly good for Byrne right now. In March, he released his first solo album for 14 years, American Utopia, to mostly gushing notices – deservedly so.

The new songs – and some Talking Heads tracks he’s not fed up with – are now accompanied by a radical, theatrical show. Byrne has spent a lot of time trying to reimagine live performances (documented, famously, in Jonathan Demme’s 1984 concert film Stop Making Sense), initially because he was awkward on stage and these days because it keeps it more interesting for him. The result for this tour is an entirely bare set, in front of a shimmering curtain. There are no amps, risers or stands and Byrne leads a troupe of a dozen performers who are in constant motion. “I can’t imagine doing a show with amps now,” says Byrne. “If you take those away, it’s almost like you can float in the air.”

Because of the special circumstances, we had to pre-order our food, so our starters arrive unbidden: golden brown aubergine leaves with tzatziki for him; the chef Fabio Cucchelli’s refined take on Tuscan panzanella for me. Milan is the halfway point of a global tour that will take in 80 dates. Byrne doesn’t have a lot of time for fine dining when he’s on the road, and you sense he’d probably get bored with a multiple-course feast. But he is drawn to offbeat dining spots. In Barcelona, he loved the tiny tapas bar Quimet i Quimet, which serves bite-sized montaditos mostly made from canned goods. “But not the bread, I don’t think,” he adds, wryly.

He also has a particular, or peculiar, fondness for leftovers. On tour, the crew usually eats dinner early and Byrne often finds that he doesn’t have much appetite. So he’ll put it in some Tupperware, stick it in the fridge on the bus and have it when he wakes up with a cup of coffee, scanning the newspapers online for stories for his website and occasional lecture series, Reasons to be Cheerful. Meat, Byrne has found, almost tenderises when you leave it overnight. “It’s like you’re marinating it,” he explains.

Our mains are delivered. Byrne chose monkfish, which comes with a giant fresh porcini, which happened to land in the kitchen that morning and wouldn’t look out of place in one of Höller’s artworks. Byrne makes appreciative noises. I have a fillet of sea bass that is less showstoppery but delicious with pea puree, tomatoes and olives. 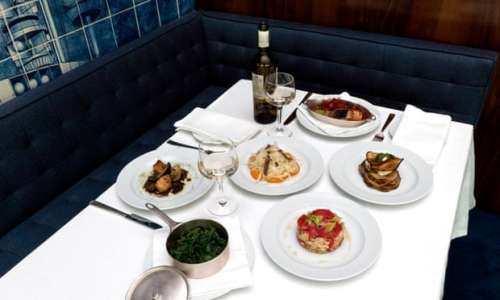 Byrne has never been much of a home cook, perhaps because he has spent most of his adult life in Manhattan with its notoriously tiny domestic kitchens. He lived in a commune in Kentucky when he first left home and he remembers cooking an especially awful bean stew there. “It was very hard to digest,” he says, arching an eyebrow for comic effect.

Byrne is more skilled these days, and he likes spices, so he’s particularly drawn to cooking Mexican and Indian dishes. He’s worked out that if you can master a basic sofrito then pretty much everything tastes amazing. Byrne often cooks with Malu, his daughter from his marriage to the costume designer Adelle Lutz. She’s in her late 20s now, a glass sculptor and jewellery maker who lives in upstate New York. “I realised it was something we could do together,” he says. “It’s a bonding thing.”

We order espressos and Byrne drains his. He’s needed at the soundcheck, across town. He weighs up whether to grab another Ofo bike, but decides against it: it’s a good six miles to the venue, he’s had a glass of wine and the live show takes a lot out of him. As for what’s next, he’s not thinking too much beyond the end of the tour in November, but there has been interest from the West End and Broadway in turning the American Utopia show into something more permanent. Byrne is clearly intrigued: he would need to create a narrative arc, to connect the songs, but that doesn’t feel impossible.

“I’ve never done anything like that before,” he says, his eyes widening. And you realise he’s not expressing trepidation or fear, only excitement.

American Utopia is out now. David Byrne tours the UK from 21 Oct; davidbyrne.com