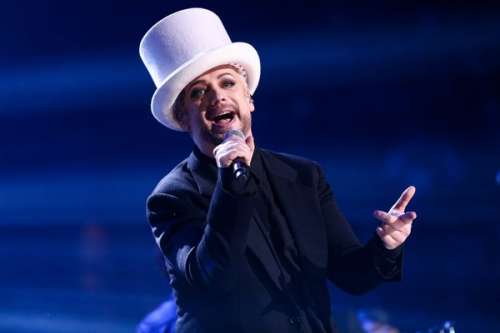 CLEVELAND, Ohio - If you want your MTV . . . we've got it right here at Also Playing, in the persons of David Byrne and Boy George & Culture Club.

David Byrne, 7 p.m. Tuesday, Aug. 7, Jacobs Pavilion at Nautica. The only award that Byrne, the Rock & Roll Hall of Famer best known as the founder and frontman of the Talking Heads, has not won is one that has not yet been invented. He's got an Academy Award, a Grammy, a Golden Globe and, as mentioned, is a Hall of Fame inductee. Shoot, the cycling enthusiast has even designed bicycle racks, so I wouldn't be surprised if fans see him pedaling around the west bank of the Flats on concert day. That makes him kind of like a variation of this age's Da Vinci - with honors and knowledge in all kinds of disciplines. Not bad for a guy most of us learned of via MTV and "Burning Down the House.'' Benjamin Clementine opens. Tickets, $30 to $150, available at the box office, ticketmaster.com and livenation.com and by phone at 1-800-745-3000.

Boy George & Culture Club, 7:30 p.m. Wednesday, Aug. 8, Hard Rock Rocksino. Talk about blasts from the past. When Boy George and his '40s pinup girl eye makeup took over MTV years ago, the whole world - well, a large portion of it, anyway - went wild for danceable pop and unisex/trans dressing. With such songs as "Karma Chameleon,'' "Do You Really Want to Hurt Me?" and "I'll Tumble 4 Ya,'' George O'Dowd pretty much owned 1983. Why, we could've all gotten rich if we'd bought Maybelline stock! He went through some troubles - drugs will do that - but is back at capitalizing on the nostalgia craze. Tickets, $67.50 to $125, are available at the box office, at ticketmaster.com and livenation.com and by phone at 1-800-745-3000.