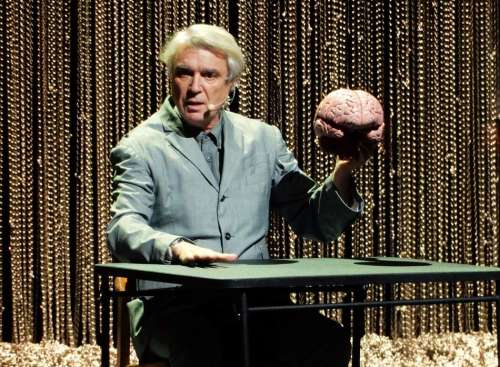 Why it took a 66-year-old man in a sensible gray suit to raze and reinvent the rock concert as we know it, it is impossible to say.

That the 66-year-old in question was David Byrne, well, now it actually starts making sense.

At an age when his peers are contemplating retirement or simply dying off, the erstwhile Talking Head has crafted one of the most thrilling concert experiences of 2018: His American Utopia Tour, which played to more than 2,000 fans Sunday at a sold-out Mahaffey Theater in St. Petersburg. It is certainly the best show I've been to this year, and one of the best I've ever seen — another singular achievement in a singular career.

You may ask yourself: How did we get here? Especially considering Byrne is a full 34 years removed from Stop Making Sense, considered by many the best concert film of all time?

Byrne's new show takes clear inspiration from Stop Making Sense, but also his obsession with color guard choreography and latter-day collaborations with artists like St. Vincent and Fatboy Slim. The Talking Heads are in there, too, enough to give lifelong fans the rare thrill of hearing songs like Burning Down the House and I Zimbra live.

But what Byrne has conjured up on this tour still feels somehow like an evolutionary leap. Not just for him, but for live music — hell, live art — as a whole.

On a largely bare plinth-like stage befitting the Museum of Modern Art, Byrne and his 11-piece band were totally unmoored, untethered, playing wireless instruments in the style of a small marching band. There was a six-piece percussion section, a keyboardist, a guitarist, a bassist and two singer-dancers — make that three, counting Byrne, who shook and scuttled and jittered until his silver swoop of hair splayed in all directions. But then, they all danced, the whole dozen of them, each moving in impeccable step with one another, interacting with the lights and the occasional prop until each song became its own distinct piece of performance art. 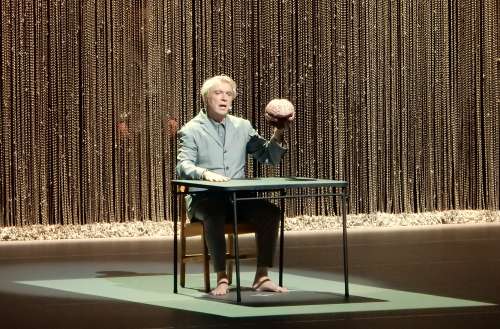 When the curtain rose on Here, for example, Byrne was sitting alone at a table, contemplating a model of a brain like Hamlet in the churchyard, admiring what was left of poor Yorick. On the doomlike I Should Watch TV, he sang into a glowing column of light behind the stage's silver rope walls, then squared off with his band as if in battle. And on the vintage-soulful Talking Heads song Blind, they played to a bright spotlight that cast giant, size-shifting shadows on the curtain behind them, a puppet-like panorama as engrossing as the performers themselves.

"Everything you hear coming off this stage is being played by these incredible musicians," Byrne reminded the crowd, who responded with rapturous approval. 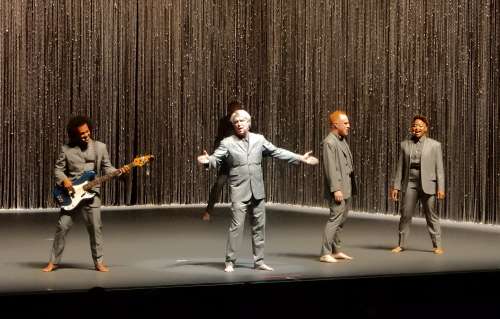 Fans jolted alive with every Talking Heads song, from the frenetic I Zimbra to the post-punk rave-up The Great Curve. Well-known songs like This Must Be the Place (Naive Melody) and Once In a Lifetime did not need elaborate moves and stagecraft to impress — but then, neither did Burning Down the House, and that song featured blasts of deep cherry-red light in each chorus and an actual marching-band pinwheel formation at the end. Is there a campaign yet to have Byrne choreograph halftime of the Super Bowl?

These are not the moves of an aging rock star hoping still to seem cool and outrageous, or even concerned with nostalgic appeal. These are moves you'd see in community black-box theater. They are routines you could grasp and memorize and stage in your own backyard. And as a result, none of the show felt overly dramatic, elevated above itself for cheap claps and gasps. It was all physical, immediate, genuine, unfakeable. If in moments it hovered close to corny, it was fleeting. Because then you remembered every other concert you've ever been to, and how similar they all look, they all feel, they all sound — the beats, the banter, the choreography masquerading as spontaneity. This David Byrne tour feels nothing like that. 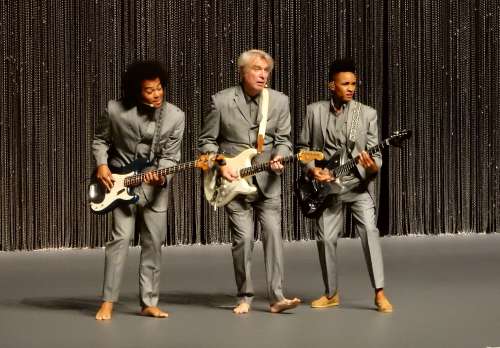 And then — then! — Byrne had the nerve to go and make the whole show about something, about the not-quite-utopia that is America in 2018. He urged fans to register to vote, pointing them to tables in the lobby where they could do so. He kept his specific politics mostly out of it, aside from one quick dig at Paul Manafort before the Imelda Marcos-inspired Dancing Together.

But that changed at the very end, when Byrne and his band, joined by singer Merrill Garbus from enthralling opening act Tune-Yards, ended their second encore with a cover of Janelle Monae's Hell You Talmbout, a protest song name-dropping a dozen and a half victims of racial violence, including Emmett Till, Trayvon Martin, Eric Garner and Michael Brown. This is where the show went from awe-inspiring to simply inspiring, with all the dancing giving way to full-throated clarion calls to awareness and advocacy.

Just as he did all those years ago with Talking Heads, Byrne found a way to get the message behind his idiosyncratic vision stuck in your head as you danced into the night. This incredible tour may be once in a lifetime. But that feeling is the same as it ever was.