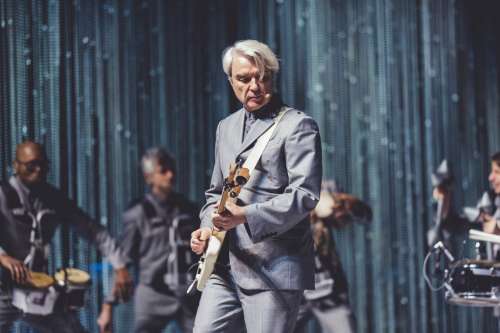 By Bryan Derballa for The New York Times

Every Friday, pop critics for The New York Times weigh in on the week’s most notable new songs and videos — and anything else that strikes them as intriguing. Just want the music? Listen to the Playlist on Spotify here (or find our profile: nytimes). Like what you hear? Let us know at theplaylist@nytimes.com and sign up for our Louder newsletter, a once-a-week blast of our pop music coverage.

David Byrne’s 2018 tour put his whole band in choreographed motion, a spectacle that rivaled the Talking Heads’ 1983 extravaganza filmed as “Stop Making Sense.” One rave review — “‘ … The Best Live Show of All Time’ — NME” — supplies the title for an EP recorded live in Brooklyn. Even without visuals, “Everybody’s Coming to My House” sheds the nervous, paranoid overtone of the studio version on Byrne’s 2018 album, “American Utopia.” While the lyrics envision ceaseless surveillance and interaction, the sheer funkiness makes it sound like one big house party. JON PARELES

An arrestingly beautiful lead single from the forthcoming third album by American Football, lonely titans of 1990s emo. Mike Kinsella sings like a nudge, a suggestion: “What’s the allure of inconsequential love?” he wonders, at a low enough volume that you know he doesn’t know the answer. All around him, bells peal and guitars swarm and the song gets tense, but only in an internal way. From the outside, there’s no sweat at all. JON CARAMANICA

It’s been a challenging … five(?) years for Robin Thicke: that Miley performance, the dissolution of his marriage, the death of his father, the crumbling of his claim to celebrity. Just this week, he was ordered to pay restitution to the family of Marvin Gaye as part of the final resolution of the “Blurred Lines” lawsuit that accused him and Pharrell Williams of pilfering the key elements of that song from Gaye’s “Got to Give It Up.” After all that, a retreat from the spotlight for good would be understandable, and perhaps advisable. But now comes “Testify”: gentle, self-lacerating, studiously vulnerable. A rather lovely acoustic guitar ballad — one that moves him toward adult-contemporary R&B, a natural new home — “Testify” is essentially a litany of failures, shortcomings, disappointments. He lists them sweetly, not defiantly. They are who he is now. These are his confessions. CARAMANICA

Avril Lavigne, ‘Tell Me It’s Over’

“Tell Me It’s Over” is a nearly pure retro move for Avril Lavigne. It’s a can’t-leave-you song — “Every time you touch me/I forget what we’re fighting about” — that harks back to early 1960s soul and girl groups, with a slow-rolling 12/8 beat, wall-of-sound orchestration and a fully belted chorus. The 21st-century tipoff, and spoiler, is the ratchety trap high-hat sound that’s likely to make it sound dated rather than classic. PARELES

Ego Ella May, ‘Table for One’

Not to be confused with Ella Mai, Ego Ella May is a singer and songwriter from London who’s on the jazzy side of the neo-soul spectrum, with a fine-line soprano and a penchant for zigzag chromatic melodies. In “Table for One,” she works through the loneliness and disorientation of a breakup — “I try to reprogram my mind/there’s no change” — to eventually decide “I don’t mind at all/I’ll be fine on my own.” Her backup band is live and improvisational in the studio, suddenly stirring up gusty, slightly cluttered crescendos and then settling back down, turning the song into an unfinished narrative. PARELES

Temptation, ‘All Hail the Silence’

Knobs, keyboards, monochrome monitors galore. Analog synthesizer geeks should thrill to this video of “All Hail the Silence” by the duo of the keyboardist and producer BT (Brian Transeau) and the singer and songwriter Christian Burns, whose mission is to record electronic pop without computers. This is the synthesizer version of recording with vintage guitars and tube amps; what once was futuristic now seems homey. PARELES

Filmore, ‘Heart’s Having a Hard Time’

A sturdy and concise pop-soul number masking as a country song, “Heart’s Having a Hard Time” is a sharp introduction to Filmore, a rising country singer with a voice that never flirts with tension. Instead, he’s a gentle mope, peaceful in his resignation to hurt, even though his words capture a sadness that’s potent and pained:

Jason Palmer is one of the great, fine-tuned improvisers of his generation, but the 39-year-old trumpeter, who lives in Boston, remains underrecognized by the jazz public. His newest album, “Fair Weather,” probably won’t correct the issue: It’s out on Newvelle Records, a label that operates entirely on a subscription model, requiring buyers to purchase a full year’s worth of records in order to receive anything. But this video for the title track — a skating, five-beat retrofit of the old ballad “Moonlight Becomes You” — offers a sense of Palmer’s powers: his way of quietly recasting the harmonies of a tune, and gently pulling a rhythm section together around him as he improvises. GIOVANNI RUSSONELLO

The Canadian songwriter Jean-Sebastian Audet released a 2017 album under the name Un Blonde; now he’s recording as Yves Jarvis. The disorientation only begins there in “Fruits of Disillusion,” a wispy, wavery, deliberately ambling three minutes of low-fi psychedelia. The track begins as a gentle drone with feedback woven in, offers a spoke-sung verse that suddenly sprouts harmonies and wanders off to an unsteady beat. It’s a rumination on “constant change” that’s secure in its own fragility. PARELES

Kid Koala featuring Trixie Whitley, ‘All for You’

The DJ and producer Kid Koala dissolves the beat in the series of recordings he calls “Music to Draw To.” His second installment is “Io,” based on the Greek myth of a mortal priestess who attracted the ardor of Zeus and the wrath of his wife, Hera. “All for You” is a serenely awe-struck lullaby, with Trixie Whitley’s hushed, hazy voice sounding just earthy enough amid shimmering, cyclical chords. PARELES

Triptych Myth was a trio led by Cooper-Moore, a lion of the downtown music scene, in the early 2000s, when he’d just ended a yearslong hiatus from playing the piano. “Finding Fire,” recorded in 2005 but not released until this week, is the band’s third and ostensibly final album, and it is a continental statement: widely varied in terms of textures and tones, unfolding like an epic novel, with various stories converging into one. The album finds Triptych Myth — featuring Tom Abbs and bass and the ever-potent Chad Taylor on drums — in tender, slowly mutating dialogue with Cale Brandley, a reeds player and vocalist. On “Sunset Park, After the Sun Sets,” Brandley starts on the ney, a Middle Eastern flute with a chalky tone, and moves to the alto clarinet, improvising in miniature filigrees and small, tumbling phrases as the trio creates a pebbly path below him. RUSSONELLO