I scored the 2nd season of the HBO series Big Love. (Mark Mothersbaugh did the first season.) The last cue for the last show, which is episode 212, according to production parlance, got posted today — Aug 3, 2007. (They're in LA, so I've been uploading the music files to an FTP site). I've been working on it since the fall of '06, though actual writing to picture didn't start until the winter of '07. It was an education. At first I had grand ambitions, the scores of Herrmann, Rota and others swimming in my head. I had an idea to base my scoring loosely on Mormon hymns. That would presumably hint at the unspoken spiritual underpinnings that motivate many of the characters' actions — or justify them, in some characters' cases. I got hymnals and Mormon Hymns CDs, read up on the Mormon Church and began to practice writing “fake” hymns. 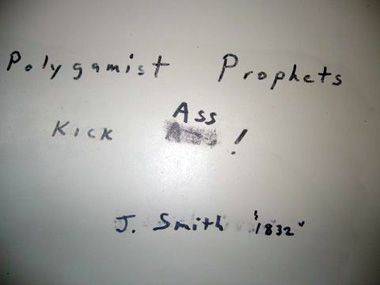 Before I had any picture to look at I wrote a half dozen of these — not for specific scenes — and I recorded them with the aim of creating a library of musical themes from which the TV people in LA could draw. In my concept I would give them complete freedom to splice and dice my cues, but this library process would possibly allow me to be more creative. Well, few of those themes ended being used. I had to agree with their decision; as score these pieces took you outside the characters, they were meta-themes, which, as it turned out, was not suitable when the aim was to get you to empathize with the characters. Big or highly melodic themes like what I had written take you outside the intimate world of individual characters, and the music pulls you back — you view the characters world as a spectacle, and from a slight distance. An epic distance, in the Brechtian sense, so it's hardly intimate. Walter Murch, the film editor and sound designer, mentions in an interview how Nino Rota's music for The Godfather almost got pulled for that reason. He would sometimes write music that played against a scene. In the scene in that movie where the guy finds the severed horse head in his bed Rota had composed a sweet waltz. The studio hated the music for that scene; because it was a counterpoint the music obliged the viewer to observe the scene from a removed vantage rather than expressing the guy's revulsion and horror. (A compromise was eventually reached.) Rotas choice invited the viewer to think about the whole world and mores of gangsters and mobsters, which is maybe a little too intellectual for a big studio. Murch: “When music makes an entrance in a film there's the emotional equivalent of a cutaway. Music functions as an emulsifier that allows you to dissolve a certain emotion and take it in a certain direction.” So, increasingly, when the episodes began to arrive, I wrote less overtly melodic pieces, and more pieces that could play as underscore and gently create a mood or add some tension without resorting to melodrama. I wrote tunes that were less busy and that tried not to draw attention to themselves, though they were still, I hope, melodic, if you cared to listen. As the episodes progressed — I would get sent locked edits on DVDs as they were completed — it seemed that even less melody might be what they were after. I got pretty good after a while at knowing what was wanted, sometimes because a temp score “borrowed” from another film had been plopped into the rough cut by the editors to determine what musical mood might work. That became a helpful guide, and I would then write something of my own that gave a similar mood. News to me, these kinds of TV shows are a writers' medium. It was usually the producer or the two writers of the show who gave me feedback, and it was obviously within their power to say yes or no. Good for them. In feature films, at least up to a point, it is a director's medium; and much has been made of referring to the director as the auteur — the author. In film the writer is more or less a hired hand who is dismissed once his or her contribution is done, but in TV, maybe because it is episodic and the characters and setting will need to be consistent for years, the writer sort of has the final say, and it is the director who is the hired hand. I never once spoke to the director of any of these episodes! Towards the end, in the final few episodes, it seemed to me that there was less call for subtle musical nods to Americana, to an idealized U.S. family (even if this one was polygamous) and to the spirituality of the Hymns. As we neared the season's end the whole thing became darker and more tragic: sons betraying fathers, evil rival clans emerging from the wilderness and child brides. (Just in time for the raids on the Texas compound this year!) What began as a study in how to juggle having 3 wives, in an orderly disciplined manner, and how those wives got along and dealt, devolved into a morass of widespread crisis, bitterness and jealousy — and in some ways the changing moods of the music — and what was needed musically — reflected that. To make the CD play better some cues were expanded a little or amalgamated if they were originally super similar to one another. I've included a lot of the original “hymns” including the ones that weren't used, as they paint the picture and maybe hold up more on their own than some of the underscore- much of which is not included. It's not a pop record by any stretch, so the audience might be limited—but I'm proud of it, so we'll see.