David Byrne and the New York City Department of Transportation, in conjunction with New York art gallery Pace Wildenstein, have unveiled nine unique bicycle racks designed by DB and installed in various locations throughout Manhattan and Brooklyn. An avid bicyclist for almost 30 years, Byrne was invited to join the panel of jurors selected by the DOT to judge a design competition for outdoor and indoor bicycle racks. Inspired by the city's initiative, he submitted some original design ideas of his own named after specific locations and neighborhoods, which the DOT enthusiastically agreed to install. The bike racks are now on permanent loan to the city, and will remain in their locations.

"The Department of Transportation is holding a design competition for outdoor and indoor bicycle racks, and I have agreed to help judge the entries. Enthused by their initiative, I sent them some sketches for imaginary bike racks named for specific NYC neighborhoods and locations. Here are the sketches: 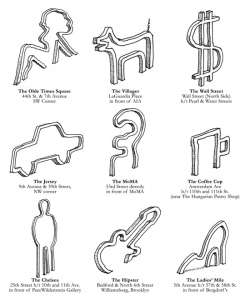 To my surprise, they responded by saying, “If you make these we'll put them up.” Holy Moses! I was over the moon—what happened to the legendary red tape and years of bureaucratic haggling I was supposed to go through?

I then approached my friends at Pace Gallery to see if they might want to cover the costs of fabrication and then possibly sell these items as original works down the line. They responded quickly, too—also with yes and yes! (make and sell.) With the help of Bill Scanga, who runs the production dept. at the gallery, we got the legal specs from the DOT, and the folks at New Project in Brooklyn then began to ponder how these curvy shapes could be produced. Bill, it turns out, is maybe more of a bicycle nut than I am, so for both of us this was a labor of love—we'd ride out to the edge of Park Slope to check on the progress over the Manhattan bridge and then down 5th Street, picking up iced coffees on the way.

Near the metal and woodworking shop a man has created a diorama in his front yard in which all kinds of miniature beasts cavort and do battle with one another: 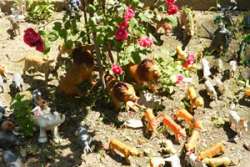 The folks at New Project came up with an ingenious solution for the fabrication, as bending the squarish shaped pipe that the city uses into these convoluted shapes would have been close to impossible. It was important to me that these things be the same thickness and material as the existing U- and M-shaped racks—to help identify them as practical bike racks and not modern art—but actually making a mudflap Tammy by bending would have been impossible. The solution was to weld pieces together and then grind the edges so it perfectly simulated the city racks, though the fabrication process was completely different. 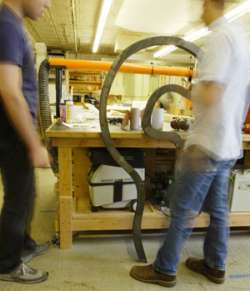 Zac Frank at the DOT helped secure some of the locations—which are about as perfect as one could imagine—Wall Street for the dollar sign! And Bergdorf Goodman for the giant high heel!

Thanks to Janette and everyone at the DOT. Marc Glimcher at Pace. Danielle at Todomundo. These will be up starting last week of July for almost a year—for 364 days."