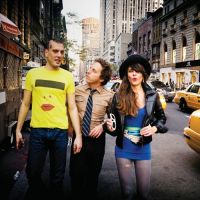 DB & Sabina duet on the English-language version of "Losing Myself," released 3/24/09.

Sciubba explains that the song is "a journey through New York City’s subway, streets, crowds, nights and clubs. Everywhere you go, you leave something behind: your scarf, a shoe, a memory, your money, an ear, your friends, your head ...until you end up being light as a feather and you have nothing left but your freedom."

The original version of the song, recorded in French, was released last summer on the Brazilian Girls latest full length album New York City(Verve Forecast). The Grammy-nominated album was applauded by critics, with the New York Times declaring it “a benediction, or a prayer, from an analog limbo," and Variety proclaiming them “the only dance band that matters."