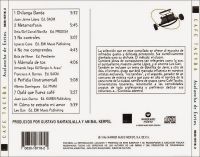 Cafe Tacuba is made up of Anónimo (Rubén Albarrán), Emmanuel del Real, Joselo Rangel, and Quique Rangel. Their third album, Avalancha de Éxitos, was an album of covers of other Spanish-speaking artists. David joined the band on the third track, No Controles, which was originally performed by both Olé Olé and Nacho Cano