Corporate Signs is a series of lenticular images based on corporate signs photographed at Research Triangle Park, North Carolina. Multinational tombstones nestled in the (landscaped) pastoral glade. When viewed from different angles the original corporate name transforms and flickers into a virtuous attribute. A utopian vision in the American countryside. 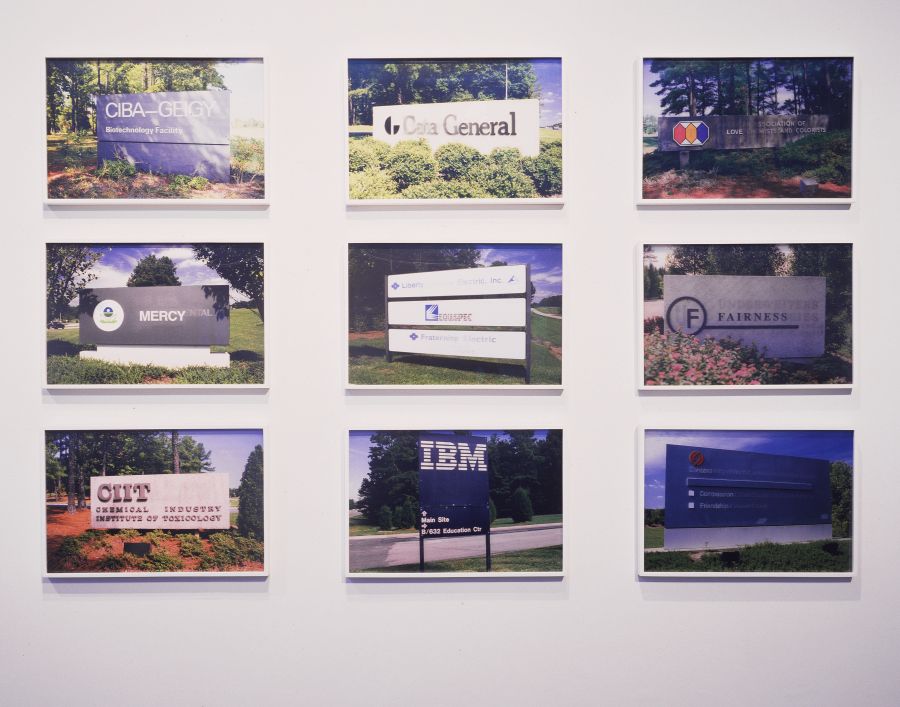 "The iconography of American business has so suffused the country’s landscape as to go almost unnoticed. Until someone like David Byrne gets ahold of it. The musician and visual arts provocateur worked with Danielle Spencer to graft iconic messages onto corporate signage photographed by Byrne a decade earlier in North Carolina’s Research Triangle Park. 'We weren’t interested in making facile judgments,' says Spencer. 'We hoped to jar viewers a bit, raise questions. Many people wonder if the alternate versions are real.' Byrne and Spencer used Photoshop to tweak the originals, then applied a process called lenticular imaging to fuse the two versions into coated prints that shift back and forth relative to the viewer’s perspective, like the winking Jesus cards in novelty stores. 'I’d been fooling around with the technology for years,' Byrne says. 'Using it to make the transformation from the name of a corporation to an idealistic virtue seemed the perfect visual gag.' The images shown here are from a series included in Illegal Art: Freedom of Expression in the Corporate Age, which toured museums around the country last year." – Shoshana Berger