I recorded a couple of songs Sunday and Monday with the band Dirty Projectors for an upcoming Red Hot project. Red Hot puts out compilation albums to benefit AIDS research and I’ve been on a few of them since they started in 1990. So, who’s on this one? Feist, Sufjan Stevens, Grizzly Bear, Sharon Jones, The Decemberists, The National — jeez, what a lineup! 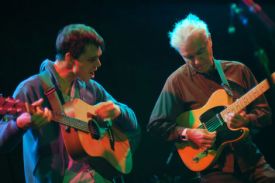 Anyways, I like what Dave Longstreth and Dirty Projectors are doing, although part of what attracts me to them is something I can’t exactly place, can’t figure out. Their music has familiar elements, yet often sounds like pop music by someone who has read about the form, but never heard it, and then handed the essential building blocks to make some songs. That’s not actually true though, as Dave made plenty of jokes about music while we were working —he has a deep knowledge of tunes and their respective artists. But the band’s music remains completely strange and oddly familiar at the same time. I’d been told more than once that we should all work together, and it seems the suggestion was fated to be realized.

For one song, Dave L sent me a demo by email that he had recorded in a Vienna hotel room on tour. I did my best to figure out the chords and the tempo, and record my own version, for which I then wrote the words. We didn’t end up using my recorded version; but the words, and my somewhat straightened out version of the melody, came in handy.

As a starting point for the second song, I sent Dave some lyrics I had written in maybe ’75 or ‘76. I used to type out odd little pieces in those years, some of which turned into Talking Heads songs. These lyrics were unlike any I knew at the time, and made some of those TH tunes so peculiar. These songs didn’t lack emotion, but filtered it through an extremely constricting linguistic bottleneck, making the tension more pronounced, though never explicit. That sounds pretentious — and maybe it is — but looking back I can now see how truly odd those lyrics were. And I realize I don’t, and probably can’t, write like that anymore. Given the Projectors’ output however, these lyrics seemed like something they might “get”.