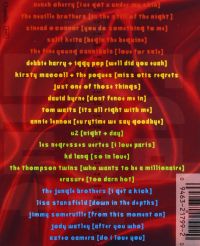 There's a long tradition of artists banding together for a noble cause, but--needless to say--good intentions are no guarantee of good art. Fortunately, the twain do meet and the project even succeeds with creative flair in this compilation. It kicked off the Red Hot AIDS Benefit series back in 1990 and in fact launched its own sort of mini-genre, including theme albums devoted to George Gershwin and Duke Ellington. In fact, this eclectic mix of Cole Porter covers interpreted by a wide swath of contemporary artists unfurls a pretty ambitious agenda in addition to its message of AIDS awareness and compassion. Here, the legacy of this ultra-sophisticated, closeted master of the popular song from the era of the "lost generation" is presented as a source of rejuvenating inspiration. Porter's craft seems validated by the very flexibility of the original songs as they get retrofitted to encompass styles ranging from U2 and Tom Waits to Jungle Brothers. There's an occasional miscalculation (Debbie Harry and Iggy Pop's didactic "updating" of Porter's bon vivant wit doesn't compare well with the original), but moments of stunning fusion abound (Sinéad O'Connor and Annie Lenox contribute especially memorable gems). Instead of getting lost in translation, Red Hot + Blue adds a whole new dimension to the art of swellegance.