Wayne Wang's follow-up movie to Smoke presents a series of improvisational situations strung together to form a pastiche of Brooklyn's diverse ethnicity, offbeat humor, and essential humanity. Many of the same characters inhabiting Auggie Wren's Brooklyn Cigar Store in Smoke return here to expound on their philosophy of smoking, relationships, baseball, New York, and Belgian Waffles. Most of all, this is a movie about living life, off-the-cuff.

By Parry Gettelman for The Orlando Sentinel: 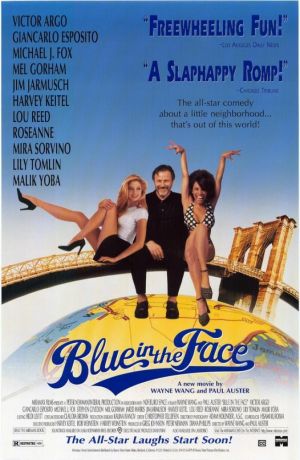 This is one of the coolest soundtrack albums to come out in a while, co-produced by David Byrne and released on his Luaka Bop label. The songs cover quite a broad stylistic range, but all flow together like a beautifully programmed free-form radio station.

The bits of dialogue from the movie are superfluous after a spin or two, and some of the songs have been released before. But one of those is the stunning David Byrne-Selena cut ''God's Child,'' so now you can get that without having to buy the Selena album.