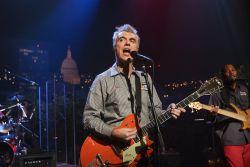 Available for the first time ever, David Byrne: Live From Austin, TX features previously unreleased performances from the award winning Austin City Limits television show. Taken from the full concerts with only a limited selection of songs previously aired, these performances have been re-mixed and re-mastered in stereo and 5.1 surround sound to provide the highest quality concert DVDs. This concert is also available as an audio album.

A note from the producer:

David Byrne is a modern renaissance man - and that's not just a cliché. From the heady days as co-founder of the celebrated art new-wave group Talking heads (1976-88) through his own constantly evolving and innovative solo music career, he has pursued his muse on many different artistic fronts. He's been the driving force behind a body of work that has been both intellectually daring and commercially successful...and he shows no signs of slowing down three decades later.

This show, captured on November 28, 2001, came on the heels of his hit single, "Like Humans Do" and the release of the album Look Into the Eyeball, which was another typically eclectic musical stew reflecting a variety of styles and influences, from Philly soul to a D.C. Go-Go inspired groove and his first-ever Spanish composition, "Desconocido Soy." Critics at the time called it his best work in years, and his performance on the Austin City Limits™ stage shows why. Joined by Austin's own eclectic tango ensemble Tosca, Byrne takes us down many different musical roads in his ACL debut.

Of course, besides the brilliant songwriter and performer that he is, he's also an accomplished performance artist, photographer, web journalist, film writer/director, composer of motion picture soundtracks, and founder of his own world music label, Luaka Bop Records.

He also has a collection of Grammys, Oscars, and Golden Globes on his mantel. His music may be complex and poetic, but he makes no bones about his ultimate intent: "I want to move people to dance and cry at the same time."