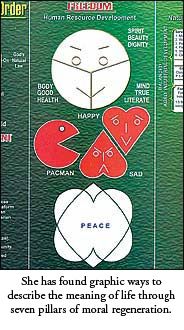 Imelda Marcos pointed a tiny pistol straight ahead of her and a red dot appeared on a screen in the middle of a heart-shaped face labeled "Happy."

The dot moved sideways to a scowling upside-down heart marked "Sad," and then to a fractured circle called "Pacman," a symbol of aggressive consumption. The story of her life.

"You put it all together," she said hopefully, aiming now at a shape that looked a bit like a flower, "an upright heart, an upside-down heart, and what you get is peace. Peace and freedom," she said.

Marcos, still as large as life, is almost 77 now, fraying a bit at the edges but bravely maintaining the peculiar frantic dignity that has always set her apart from the rest of us, who might be labeled "ordinary."

"I've had the best-best-best and the worst-worst-worst," she said in an interview in her apartment, with its gold upholstery, its master paintings, its ranks of framed photographs and its buckets full of artificial flowers.

In the 20 years since she and her late husband, the former president Ferdinand Marcos, were driven into exile and disgrace by something called "people power," she has retrofitted her tangled philosophy of life into a truly incomprehensible Power Point presentation.

Her patter is so realistic that it gives the illusion of making sense.

"Beauty is God made real," she said, and, "The opposite of love is not hate, it is selfishness," and, "The only things we keep are those we give away," and, "Common sense is common to all."

She has run through it so often that it gives her relentless mind a chance to rest - "just 10 more minutes" - as both she and her listener follow the peregrinations of the red dot half asleep.

Her mind wandered and she touched her fingers to a very large yellow brooch pinned to what seemed to be a well-worn blue dress.

She was met with surprise.

"I don't wear jewels any more," she announced. "They stole all my jewels. These are recycled garbage that I make into jewels."

"It's beautiful," she said. "Here, I have a plastic ring. I did it. I designed it. I have hundreds and hundreds. I have a room full of jewels made of plastic."

Servants began carrying in trays of plastic jewelry - tray after tray - and Marcos hovered over them. It was a breathtaking re-enactment of the years when she had more of everything than she could ever wear.

She stood tall and proud, as she always has, somehow alert and distracted at the same time; blue scarf, yellow shoes, her hair a little loose.

"I'm more bejeweled than before," she said. "Bejeweled with garbage."

Her emeralds and rubies are in other people's hands now, still seeming to exert the magnetic power of wealth that seduced Marcos and her husband, who died in exile in Hawaii in 1989.

The government says it is in the process of selling off about $10 million of her jewels - what is left after her friends picked through them when she fled the country. But something keeps delaying the sale, and it will be interesting to see if the collection is still worth $10 million when it finally reaches the auction block.

Estimates of the stolen Marcos wealth range into the billions in cash and property, but after 20 years of hunting and suing, the government has recovered only bits of it.

Some of those fruits of corruption may have been recycled. President Gloria Macapagal Arroyo has been accused in Parliament of diverting part of the recovered money to her own election campaign.

Mr. Marcos earned his wealth honestly, his widow said, speculating in gold and amassing 7,500 tons by the time he went into politics in 1949, a fair portion of the world's reserves.

"He had all the gold mines," she said. "He had a refinery. We had our own bank. I have all the records and I can show you."

And within moments, her servants were lugging from a back room armloads of photocopied legal documents, which they spread with a thump in heavy stacks across a row of small tables.

She bent over them as if they were plastic jewels. Copies of stock certificates. Deeds to buildings. Manifests for planeloads of gold.

"These are authentic!" she said. "Some of them have FBI markings."

Altogether there are 350,000 documents from more than 900 cases that have been filed against her, she said, and she plans to collect them all and put them somewhere.

"When Marcos died they hired 60 top PR firms to destroy me," Marcos said. "They spent a hundred million. No one could touch me."

So despite the opulence of her apartment and the social swirl she still enjoys, Marcos continues to experience some of the worst-worst-worst in her life.

Dozens of cases remain pending against her and a U.S. court has ordered her to pay billions of dollars in reparations to victims of human rights abuses.

And still the government's lawyers are hounding her. No wonder Marcos feels put-upon.

"Even the Bible says there's a special place in hell for those who oppress widows and orphans," she said.