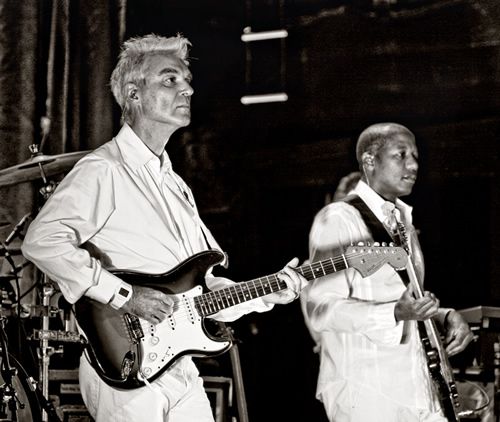 The Uptown Theater was a sea of white folding chairs last night. It ain’t no CBGB. I couldn’t remember the last time I went to a show where people actually sat in seats, but it didn’t matter; once David Byrnepulled out the hits, people jumped to their feet.

Byrne emerged from the wings in bleach-white skinny pants and a white shirt that matched his sharp white hair, and relayed the story behind the tour. His longtime buddy, musical innovator Brian Eno, had a batch of songs with no words just lying around unused, like a garage full of gassed-up convertibles waiting to be taken for a spin. Byrne agreed to listen to them and see if lyrics struck him, and if Eno liked what he came up with, they’d continue from there.

The result is the Internet-released album Everything That Happens Will Happen Today. Byrne was joined onstage by a ten-piece ensemble of three backup singers, three dancers, a bassist, two percussion players and a keyboardist – all dressed in blinding white. Given the amount of sweat poured onto the stage, this tour’s laundry bill must be a killer. 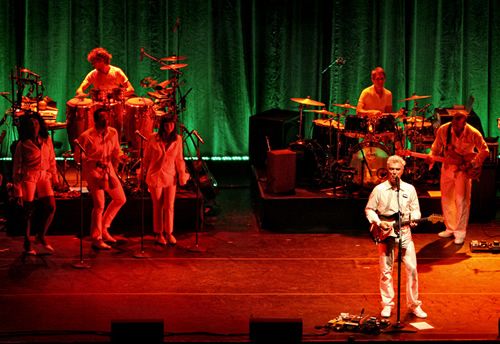 When Byrne launched into the first song – I didn’t download the new album before the show, and honestly, I don’t think many people in the audience had, either – the wall of warm sound enveloped us like I’d forgotten live music could. The last two shows I attended were both mainly electronic: M.I.A and Santogold in Lawrence. They were great, but David Byrne kicks their DJ-backed asses. The effect, with white-clad modern dancers slingshotting each other around the stage, was like a beach party where world-music influences collide, reminding me of that quote about everyone fucking until we’re all the same color. Not that the color would end up being white, but that white is the absence of color. Feel me?

Byrne performed several of the new songs in a row, pulling instruments from all kinds of influences, including a Spanish flamenco percussion box and a Hammond organ keyboard effect. One song was overly jarring and jangly and full of piercing, fake-bird calls, but was almost redeemed by a backup singer’s African-inspired wailing. [This song is "Help Me Somebody", from the 1981 Byrne/Eno album My Life in the Bush of Ghosts —ed. ] 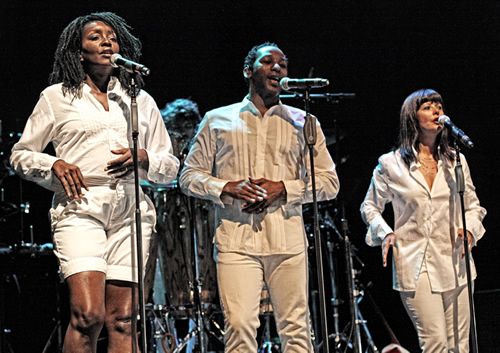 The new stuff was pretty great, but when Byrne eventually played a Talking Heads hit, “Heaven,” a wave of relieved recognition spread through the crowd. Byrne also played “Crosseyed and Painless,” and “Life During Wartime.” On the latter, in the lyrics about tapping phone lines, Byrne emphasized, I know that that ain’t allowed. It was clear where he stood from the beginning, after he’d paraphrased the lyrics to one of his new songs, saying, “Everything will change one fine day – that day will be November 4th.”

He might be getting up there in years, but Byrne had it in him to play three encores, and danced the hardest during the second one. At one point, dude was playing guitar while running in place.

Encore #3:
“Everything that Happens will Happen Today”

Critics Notebook
Personal bias: I enjoy the Trick Daddy and Cee-lo version of “Sugar on My Tongue” as much as the Talking Heads version.

Random detail: Star music critic Tim Finn and I chose the same song from the new album as our cue to get up to pee. Also: Democratic political operative Steve Glorioso and family snuck out after the second encore.

By the way: The big David Byrne fan next to me said that of all the times he’s seen Byrne live, he’s never seen Byrne perform his favorite Talking Heads song “The Great Curve” until now.