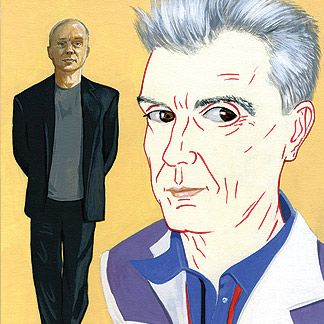 David Byrne and Brian Eno retreated to pop's periphery years ago, but their influence is suddenly front and center. There are echoes of Byrne's old band, Talking Heads, in the avant-funk of LCD Soundsystem and other dance-rock bands, and you can hear the singer's workaday hysteria in the cadences of Arcade Fire's Win Butler and Modest Mouse's Isaac Brock. Coldplay sought producer Eno to help them make Viva la Vida, a record that recalls another album with Eno's mark, U2's The Joshua Tree. You can also hear Byrne and Eno's world-music fusions reflected in polyglot indie bands like Vampire Weekend.

With their new album, Everything That Happens Will Happen Today, the pair rejoin the rock conversation as if they'd never left. The last record Byrne and Eno made together was the groundbreaking 1981 dance-rock tape collage project, My Life in the Bush of Ghosts, but the duo go back further — Everything recalls the three Talking Heads records that Eno produced, played on and/or wrote: 1978's More Songs About Buildings and Food, 1979's Fear of Music and 1980's Remain in Light. For those records, Eno was essentially a band member, bringing a darker, more layered and atmospheric sound to the group.

Everything sounds more like a Heads record than anything Byrne's done since the band split in 1991. A radiantly tuneful set made with sidemen, from agile, young polymath drummer Seb Rochford to Roxy Music's Phil Manzanera, the album often evokes sublime, slow-to-midtempo Heads songs like "Heaven" and "This Must Be the Place (Naïve Melody)," as well as dreamy Eno songs like "St. Elmo's Fire" and "I'll Come Running." The album was created with a fairly strict division of labor. Byrne wrote the words and sang lead. And Eno made the music, bringing an effervescent sonic gloom that adds some mystery and tension to Byrne's plainspoken lyrics — qualities missing from much of Byrne's solo work. "Poor Boy," for instance, sounds like a Bush of Ghosts outtake, all percolating bass bubbles, clattering percussion and spooky vocal samples. Byrne's words set a scene that would have appeared innocuous in 1981 but feels oddly menacing in 2008: "A truck parked this morning outside the grocery store."

Byrne has described the music as "folk electronic gospel," openly wondering at the songs' uplifting tone ("The Bush era was not a particularly hopeful time for many of us," he writes in the album notes, "so where did all this exuberance and hope come from?"). And Eno has credited his ongoing interest in gospel to hearing "Surrender to His Will," by Reverend Maceo Woods and the Christian Tabernacle Choir, way back when he was working with Talking Heads on More Songs About Buildings and Food. But this is a secular, practical sort of gospel. The opener, "Home," finds the singer longing for a nest, even if it's one with "neighbors fighting" and "cameras watching." Beautifully harmonized by both men over a vigorous acoustic-guitar strum with a soaring Joshua Tree-style solo, it finds beauty and fleeting peace in spite of the ugliness. On "Everything That Happens," Byrne coos over a morphine-drip soundscape about riding "on a perfect freeway" and savoring "the sound of someone laughing," when suddenly he sees a car explode. "Strange Overtones" is wistful dance-floor nostalgia, with a groove that recalls George McCrae's 1974 hit "Rock Your Baby." "My Big Nurse" is a gentle country tune with a narrator who's obsessed with dancing "on this lazy afternoon" amid fellow humans who are "in love with war."

Ultimately, Everything That Happens Will Happen Today is about how music heals even if it can't cure. On "The River," amid clapboard-church vocal harmonies, Byrne declares, "A change is gonna come/Like Sam Cooke sang in '63." Maybe it will. But what seems important here is the collective hope for it, channeled in song by a couple of old visionaries whose music should continue to inspire young bands and the rest of us.