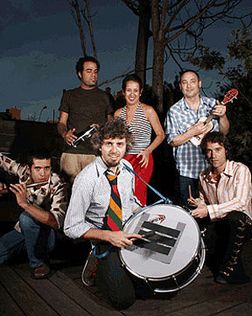 "Forro is marked by complex, ever-shifting percussion accents. The basic rhythm is heavy on the first beat, sounding like a swinging blend of funk and samba. Folklorists think the style is about 100 years old.

Rhythms that sound like samba, American country music, reggae and hip-hop float through the mix, married to the basic forro thump, but things are not always what they seem.

'There are three rhythms of forro,' Refosco says. 'We use them all on our album. What you hear as reggae is called xote, which has a reggae feel. Our song "Limoeiro Do Norte" uses the xote rhythm. "Asa Branca," a famous Luis Gonzaga song, uses a midtempo beat called baião. On the album, David Byrne sings his translation of Gonzaga’s lyrics. Arrasta-pé is the fastest tempo of forro. Our song "Indios Dos Norte" uses it. It sounds like a polka and there may be some Polish influence in it, because the bass line is exactly what you’d play for a polka.'"