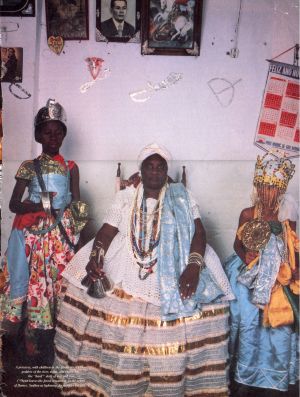 Ilé Aiyé is David Byrne's breathtaking 1989 documentary on Candomblé, the African-influenced spirit cult of the Bahia region of Brazil.

Ilé Aiyé explores the ways in which Candomblé has influenced the daily life and culture of the people of Brazil in music, art, religion, theater, food, dance, poetry and more. Ilé Aiyé uses experimental film techniques, music, and cultural observation to express the life and rituals of Candomblé and the symbolic manifestation of the Orishás, the deities which represent the wide range of natural and spiritual forces. The rhythms of the sacred drums and bells, a dance of spiritual ecstasy, offerings and sacrifices, divination and the visitation of the Orishás through trance are all part of the color and life of Candomblé.

Complemented by the original score from David Byrne recorded with Bahian musicians, the music in Ilé Aiyé includes ritual music recorded during ceremonies as well as popular Brazilian songs influenced by Candomblé.

"With Ilé Aiyé, David Byrne has done justice to a wonderful culture."
— The Wall Street Journal