I first saw a performance by Ultima Vez/Wim Vandekeybus in Seattle in 1991. I was knocked out. The piece was inspiring and inventive.

Wim, the dancers and I managed to talk afterwards and we more or less kept in touch after that. Time passed. After some years we talked about me doing music for a film that Wim had in mind based on a Paul Bowles story. The film did not happen, but the project managed to get us back together and talking... and wondering if there wasn’t some other project we could collaborate on.

It also began with a story. In this case two short pieces by Julio Cortázar, the Argentine writer. The stories are more or less evident in the film which appears as part of the performance, but the stores also served as a kind of springboard and inspiration of the dance and performance as well.

I had done music for dance and performance before...

So, I knew the problems and pleasures of working alongside another creative artist. I knew that sometimes my work would be rejected... and I knew that music would sometimes need to be altered to fit some movement... 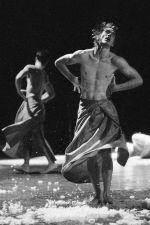 I also knew that when the music and performance work together they both benefit...

My working method was, after reading some materials, to see a very early rehearsal... at the company’s studio in Brussels... I saw the very beginnings of the dance sections and some early improvisations on the dramatic and performance ideas. I also heard that Wim was already using, among other things, some of my music...

So, although Wim originally approached me to do only a couple of pieces, I offered to try to do as much as possible. The whole piece, if Wim and company liked what I did.

I see that this piece is pulling together so many elements, both physical, emotional and musical... I see movement and dance grammar based on patterns and gestures found outside the normal dance vocabulary... and music and sound found outside the pop, rock and dance music vocabularies... but containing and referring to elements of all of them.

This is one of the things I love about the pieces of Ultima Vez... the willingness to ignore all rules except that the piece must ‘connect’ to an audience and ‘work.’