La Portuaria is: Diego Frenkel, Sebastián Schachtel, Colo Belmonte, Adi, and Pablo Gimenez. They are from Argentina. "Hoy no le temo a la muerte" is featured on their album RIO. 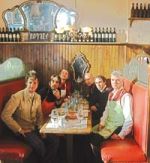 Buenos Aires, city of witches and asphalt, a port landlocked, lends itself to amazing encounters between musical sailors. There they are, sitting at a bar on Rodney Street, singing the album Escenas de la vida amorosa (1991), members of La Portuaria, embarked on a journey shaped by a guest: David Byrne. What do the former leader of Talking Heads, dress bartender and a stuffed bird have in common here? Films, under the orders of director Daniel Böhm, images that accompany "Hoy no le temo a la muerte," from Rio (the most recent album by La Portuaria) that had given him his voice. Tonight Byrne is also singing with the quintet in La Trastienda, in what can be considered as a sort of appointment of honor. "I know I can do my part to 'Hoy no le temo a la muerte,' but we also want to try some other songs, both of them as mine. That part is a mystery, because we have not even tried, nor know what will be," said Byrne."

For members of La Portuaria, working with the former Talking Head is "a dream come true." "We've heard much music of his since we were very young," recalls keyboardist Sebastian Schachtel. "Diego (Frenkel) had a cassette on which was the song 'Once in a Lifetime,' that was the first thing we heard from Talking Heads. It was a band that always surprised us." The singer and guitarist Diego Frenkel, meanwhile, described the album Speaking in Tongues as" revealing ." The imprint of the New York quartet was always among the primary influences of Frenkel, who often said he was "Creole David Byrne." "That's because Clap, the band had with Sebastian at age 20, had a lot of Talking Heads, The B-52's and The Police," explains the Argentine singer to his Scottish colleague who looks at him with some bewilderment. Byrne says he never heard his influence on the music of La Portuaria and the first time the Argentine band caught his attention was when "I wanted to include a song, Huija (1995), on a compilation of Latino artists that never materialized. For me it was sad that never came out," says Byrne. "It was at a time when there were many interesting things happening in music from different places and you wanted to show them to the public in Europe and the United States."

Anyway, the contact was made through mutual friends and, finally, Frenkel and Byrne met in New York. Argentina invited the Scot to see De la Guarda, and he returned his attention to a proposal to see Los Auténticos Decadentes. When the is story mentioned, Byrne explodes in laughter: apparently, the issue is number as in all joint interviews. "We were David, my wife and I to see the Decadentes at a sort of Latin nightclub, which was full of Mexicans who did pogo" recalls Frenkel. "And it was interesting because it was seeing the Decadentes from another perspective: like a fellinesca party, a carnival different from the context." Byrne has always referred to the Decadentes among his favorite Argentine bands: "As I understand it, at first they were like a joke, but then the music got better and they made better songs. They still have a lot of humor, but now are serious. "

While everyone else at the bar is getting ready for production, Frenkel and Byrne are sitting in a motorhome. In 2004, La Portuaria opened the concert for another Argentine singer visiting New York "The contact was more casual, not so much business," the former Talking Head said. "The first thing that attracted me to La Portuaria is that they have some good songs. But I think at the time when that compilation failed, I wanted to build a listenership, in this group as in others, a mixture of sounds and instruments with local rock and pop. This band was not a copy of an English or American band, but something new that appeared." Frenkel says part of the empathy between La Portuaria and Byrne has to do with openness to different rhythms of the world, and notes that, with albums such as Remain in Light and Naked, Talking Heads was a very "ethnic" band. Byrne laughs. "For us, music is not just a matter of local color or folklore but constantly seeking new languages" continues Frenkel. "And not many white musicians have openness like David to what happens in Brazil or Argentina, who know and are so curious."

-Byrne, does that curiosity remain in your music?

David Byrne: Yes, because sometimes I get bored with Anglo rock. There is too much beautiful music out there and all you have to do is listen. For me the question should not be why you hear that, but why is it strange to do so.

When he was asked to participate in Rio, La Portuaria sent Byrne three songs: “Planeta,” “Hasta el final,” and “Hoy no le temo a la muerte.” 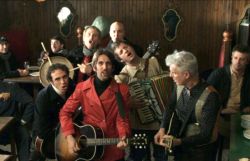 The Scot chose the latter because he liked the lyrics and the hook. "I could remember it instantly, so it became my favorite. Then I made a small English translation, I recorded my part in New York and sent it to them." Schachtel, completely laughing, "Of course we could not believe it. "

-In the context of Rio, "Hoy no le temo a la muerte" is the song that has a clear seal of La Portuaria, while the rest have gone to other climates and styles. Will there be influence from Byrne on the song he chose?

Diego Frenkel: Actually, it costs me to define an identity for La Portuaria or to make that assessment. The album is very special because it's all sound: keyboards are accordion, batteries are legüero hype. There is a unity in the sound and not much distinction. And that about La Portuaria is something that I have no ability to see.

Sebastian Schachtel: Same. David chose the subject to be outside, more spontaneous, and more direct lyrics. We sent all three. It is the most "popular."

DB: Possibly you have chosen for that. What happened to me with that song was that it sounded as if it already existed before, like a classic folk song. And I thought that was fantastic: not everyone can compose something that sounds like it existed before.

If members of La Portuaria could not believe David Byrne would collaborate on their album, were the most open mouth even when he agreed to come to Argentina to record the video of the song. "The time is right," says the former Talking Head. "I'm not on tour or in the middle of a recording, and as I like Buenos Aires..." The idea of ​​the video was discussed via e-mail, "and it had nothing as difficult or risky to do in the clip, like skiing or things like that." Byrne took the plane and arrived Thursday afternoon. And even after the show in Buenos Aires, quintet and guest are going to repeat the experience in Bariloche, the skis will be well kept. Byrne is to return to New York, where he is developing a collaboration with Fatboy Slim. "It's like a musical theater project, but we are just seeing where we are going," he adds. And there will be new crossings between it and La Portuaria? "Nobody can know" he answers. "Of course, in these times it is much easier to realize these unions."