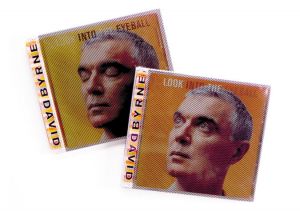 I can't really hype my own record, or begin to tell what the songs "mean," or why I wrote them. Those things aren't known to me often until at least a year later, when the whole thing is behind me and I can listen to it as if it's someone else's record. But I can tell how the recording came to be the way it is. Maybe those mundane details will reveal some part of the deeper decision process.

I had been wondering if there might be a way to include the warm, lyrical, beautiful, emotional sounds and associations of strings and orchestral parts with groove music and beats for the body. I want to move people to dance and cry at the same time.

This record began after my week of Knitting Factory dates with the Balanesçu Quartet, and the TV appearance we did together on the PBS show "Sessions At West 54th" back in 1998. The Balanesçu's and I first performed together at the Expo in Lisbon in '98, sharing the stage with Waldemar Bastos, Tom Ze and their bands. At the later Knitting Factory and "Sessions" dates, we took it further. It was not perfect, more a "work in progress." But I could see that something exciting was possible.

I started writing two summers ago in a small town in Andalusia, in the south of Spain. It's an ugly little town, and the wind blows incessantly. But I got a lot of musical ideas recorded. I played grooves, made loops and faked string parts with a sampler and sang gibberish lyrics to outline some melodies. Upon my return to NY, I played these tapes for some people, along with an "inspirational" CD of songs I had compiled that included songs by Stevie Wonder, Bjork, Isaac Hayes, Caetano Veloso, Tricky, Lambchop, Serge Gainsbourg and Los Fabulosos Cadillacs. This was meant to hint at where things could go, and to make it clear that this approach didn't necessarily confine one to an arty project or pretentious art pop. There was that, to be sure. But there was also Silver Convention (a disco pop group from the 70s) and "Theme from Shaft" in there. It was mixed bag.

The songs then began to take shape, some even having words.

I holed up a few times at a friend's house in the Catskills (upstate New York). It was the winter and there was no one around, and I got more words written. Around this point I got in touch with Mike Mangini, whose work on Imani Coppola's record and on the first Digable Planets CD were favorites of mine. Mangini's work is pretty groove-oriented, which I thought was a plus. He often mixes electronic and twisted samples with live players, which I assumed was the way to go with this material--to be open to all kinds of sound sources.

We talked about players and arrangers. The demos hinted that the songs wanted to be interpreted in a variety of styles, and we assumed that different arrangers might therefore be best for different songs.

Shawn Pelton, Mauro Refosco and Paul Frazier made up the rhythm section on most songs (Mauro had played with me on the davidbyrne CD and tour, playing vibes, marimba and percussion). Vinicius Cantuaria and the legendary Paulo Braga layered up a batucada on "The Great Intoxication." And others joined here and there, including Sebastian Steinberg (ex-Soul Coughing) and Brad Jones on bass.

Once the basic tracks were done, it was time for the arranged parts to be recorded as separate sessions. In certain cases, some songs didn't need anything added. Others were recorded all at once, with no basic tracks, such as on "The Accident."

I approached Greg Cohen, whose arrangements on the live version of Tom Waits/Bob Wilson's "The Black Rider" were wonderful, full of odd sounds and textures, but all from acoustic instruments. These arrangements of Waits songs were never recorded, so I was going by memory. But Cohen's approach seemed perfect for "The Revolution" and "The Accident."

"Neighborhood" was written with the Gamble-Huff-Philly Soul sound in mind. Even the lyrics were inspired by those songs. So, after some hesitation, I eventually got up the nerve to track down Thom Bell, who arranged (and wrote) some of the best songs in this style: songs for The Stylistics, the O'Jays and many others. Classic Olde Skool stuff, but timeless. He agreed to have a listen. From hearing my demos he had a pretty good idea of where to go arrangement- wise on "Neighborhood." But I also wanted to pull a "let's see what happens" number. So I also threw "Like Humans Do" his way as well. It's D.C. Go-Go inspired groove. It wasn't exactly MFSB-type feel, and the changes were pretty out, but I thought "why not?".

I love the arrangements that Jacques Morelenbaum has been doing for Caetano Veloso's recent records. So Caetano took a CD of my basic track--just dobro, voice and percussion--and gave it to Jacques, with whom he was beginning a European tour. Jacques loved the song "Smile." He eventually managed to write the parts on his laptop and e-mail them to us. After a brief trip to computer hell, we managed to print those parts out.

Sandy Park and the musicians she gathered were indispensable at this point. So was Tony Finno, who transcribed these parts for each player. Tony also did an incredible job on the string arrangement for "The Great Intoxication."

"Desconocido Soy" marked the first time I've written a whole song in Spanish. It was frightening. I initially tried writing the words in English, but the phrasing and meter of the melody was making it difficult. So as an experiment I sang some phrases in Spanish that fit the melody, and it seemed to fit better, more naturally...so I kept at it.

Javier Liñan in Spain liked my version (I wanted him and some others to hear it to be sure I didn't sound like a complete fool). He suggested that although my Spanish was OK, it still sounded a little weird in parts, and that if I were joined by another singer, it might ring truer. So I sent a tape to Ruben from Café Tacuba, the band from Mexico with whom I'd collaborated on their EP "Avalacha de Exitos" and on a song ("Yolanda Niguias") which we co-wrote for the Red Hot + Latin CD Silencio=Muerte. I wasn't even sure he'd like the tune. But I guess he did. He recorded a few vocal versions within a week and they really "kicked the song up a notch."

I still didn't have a title at this point. But I did have an idea for a cover. I had seen Martin Parr's hilarious little book of photos of himself taken by all sorts of portrait photographers all over the world. I was also reminded of an idea Geggy Tah once mentioned about wanting their publicity photos done at Sears. So I thought I would have a go at it, but with a twist. Kara Finlay and I went to a photo studio in a mall in Jersey City, which was loads of fun. But after looking at the results, I could see that one of my ideas--to dress up as different people, sort of in disguise, sort of extreme versions of myself--was not appropriate. The record, I believe, is fairly sincere, not ironic, and any tricky--jokey images like those would give the wrong impression. This idea was abandoned for a cover.

By this time a title I had settled on a title: Look Into The Eyeball…which to me reflects both the record's preoccupation with human relations, and it's slightly off-kilter view of the same.

I approached Danny Clinch, a photographer I'd worked with before. I had some ideas going in: to be photographed as one anonymous person amongst other anonymous people, perhaps seated at a crowded bar, riding the subway, on the street, at a street corner. I also suggested we put together a fake "band" that would represent the music on the record--a group of percussionists, Paul on bass, and a small string section--and that we play in a subway station. At the same time I called Steven Doyle, the graphic designer who, with others in his company, had just done the cover for the new Jim White CD for Luaka Bop. I told Steven my ideas and he added some of his own. As of this writing any of these could be the cover.

When I first started to make music sketches for what would turn out to be this record, I imagined the result would be something a little different. I imagined longer instrumental pieces, which would evolve into songs. But as I kept writing (although a few of them ended up that way), most of the demos asked to be shorter and more and more concise. At times I felt like I needed to apologize for how accessible the songs were sounding. But then I realized that this is what they wanted to be. Like the song "The Revolution" implies, I somehow imagine that a real revolution is won by seduction, by winning over not just the mind, but the body and the senses as well. And that the sadness of some of these melodies are countered by the vigor and persistence of the groove.