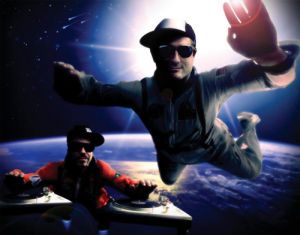 N.A.S.A is an ongoing creative collaboration between two lifelong music aficionados, Squeak E. Clean ad DJ Zegon, and their friends, friends of friends and musical heroes. While N.A.S.A. stands for North America/South America and contains a number of superstar artists from both coasts of the US, it is about as far from a tension-building geographical showdown as a record can get. Rather, their Anti debut The Spirit of Apollo was born with the righteous goal of bringing people together through music and art, and that is exactly what masterminds Sam Spiegel (Squeak E. Clean) and Ze Gonzales (DJ Zegon) have done. Brazilian funk provides the roots of the songs and binds them together into a cohesive whole, but from there, the imagination behind The Spirit of Apollo ranges far and wide. Unexpected collaborations abound on the eighteen track release. Tom Waits growls over Kool Keith, Karen O taunts while Ol' Dirty Bastard gives shout-outs to Wu Tang and N.A.S.A from the grave, and David Byrne, Chuck D and others expound on the evils of "Money." In spite of the range of performers, the pairings seem organic, inspired and make perfect sense on the first listen, never coming off as ironic or impulsive.

DB on "The People Tree" video, directed and animated by Syd Garon, with art by Marcel Dzama:

"Since I wrote a tune and some words for Mr Clean's track various layers of meaning have been added—not the least of which is Marcel's animated video. Having first seen his work at a show by the Royal Art Lodge collective I wondered if there might be something in the water up there in Winnipeg. Here is the voice of God speaking through an old Oak tree—which seems perfectly right... and it complements the song perfectly, as do the ghosty spermy spirits at one point. Anyway, I'm flattered and thrilled that this all happened—I never would have dreamed it, but now I do."

"Money" was released digitally on 12/16/08 and the music video was directed by Syd Garon & Paul Griswold, featuring the artwork of Shepard Fairey.