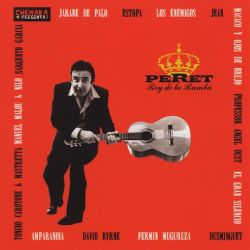 If you dig the "Macarena" or Gipsy Kings, you'll appreciate the Catalan rumba of Pierre Peret. In the late 1960s he rocked Europe with a flamenco fusion that earned him the moniker "the Elvis Presley of Spain." He innovated a guitar technique called el ventilador (the electric fan) that brought him tremendous success, but in the late 1970s he dropped out of the music scene for religious reasons. It wasn't until he was coaxed out of retirement to perform at the closing ceremonies of the 1992 Olympics that he began to reinvent himself. Now the transformation is complete with Rey de la Rumba (King of the Rumba), a dance-floor explosion of fiery rumba flamenca and gypsy pop. While Peret could have called on contemporaries like Julio Iglesias, Raphael, and Rocio Durcal for his comeback, he instead grabbed a whole new generation of collaborators like David Byrne ("Si Fulano"), Sergent Garcia ("El Muerto Vivo"), and El Gran Silencio ("Borriquito"). With his inventive paella of songs that are meant to move you, Peret is a refreshing breath of Spanish air.
--Jesse "Chuy" Varela