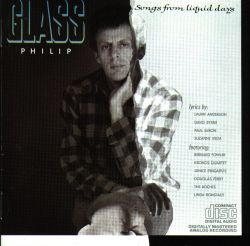 Songs From Liquid Days is a 1986 album of songs from composer Philip Glass. Each song was scored by Glass while the lyrics were provided by different collaborators, beginning with David Byrne. Glass said of the project, "The words come first. From these I fashioned a set of six songs which, together, form a cycle of themes ranging from reflections on nature to classic romantic settings. After the music was written, I — along with producer Kurt Munkacsi and conductor Michael Riesman— began the long and difficult process of 'casting' singers for the individual songs. We felt that the interpretation a singer brings to a song is an immense contribution to its character — contributing their own personality to the work perhaps more than any other performer."