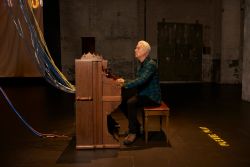 Playing the Building is a sound installation in which the infrastructure, the physical plant of the building, is converted into a giant musical instrument. Devices are attached to the building structure — to the metal beams and pillars, the heating pipes, the water pipes — and are used to make these things produce sound. The activations are of three types: wind, vibration, striking. The devices do not produce sound themselves, but they cause the building elements to vibrate, resonate and oscillate so that the building itself becomes a very large musical instrument.

Some years ago Jan approached me through our mutual friend Anne Pasternak about doing something at Färgfabriken. I visited the space during one of my music tours and took photos so I could remember the way it looked. For a while we talked about an exhibition, and some other ideas, but for various reasons those didn’t happen. I seem to remember that both Anne and Jan suggested I do something that might bring together my visual art interests and projects and my musical background.

After thinking about it for a while and looking at the pictures of the space I suggested an installation that would produce sound and would take advantage of the fact that the institution is housed in a raw factory space — with exposed pipes, heating and structural elements (unlike most museums and galleries where these elements are hidden.) I also wanted an installation that involved the public, the visitors to Färgfabriken, so this would do that too. It would be more “hands on” than most exhibitions where one can look but not touch.

Here is my proposal:

A sound installation in which the infrastructure, the physical plant of a building is converted into a giant musical instrument. (I use the term musical loosely. It might not play melodies in the conventional sense… but it might.)

To create this various devices are attached to parts of the building structure — to the metal beams, the plumbing, the electrical conduits, the heating pipes, the water pipes — and are used to make these things produce sound. No amplification is used, no computer synthesis of sound, and there are no speakers. The machines will produce sound in three ways: through wind, vibration and striking. The devices that are part of the piece do not produce sound on their own, but instead they cause the building elements themselves to vibrate, resonate and oscillate so that the building itself becomes a very large musical instrument.

It is a way of activating the sound-producing qualities that are inherent in all materials. The materials’ nature and form will be what determines what kind of sound they produce. Everyone knows that if you strike a metal beam with your hand you get a sound — well, this piece does a similar thing, but without hurting your hand, and it will be able to activate materials in different parts of the space simultaneously — something you cannot do with your hands.

Wind:
A blower forces air through electrical conduits or pipes, eliciting a whistling series of notes, depending on the length of the pipe. (The wind will blow through the electrical conduits by a small air pump. At sufficient pressure the air will cause the air inside the conduit pipes to resonate and produce flute-like tones.)

Vibration:
Machines attached to the metal crossbeams cause them to vibrate, sending out a low hum and throbbing sound. The girders can be made to vibrate using oscillating motors… and since the girders are of varying lengths they will produce different pitches and sounds. They will need electrical power and another cable running from the keyboard/switcher, which will turn them on and off. There will be maybe 4 or 6 of these units scattered around the room, some near and some far away.

Striking:
The hollow metal columns that line the interior of the space are made to clang and ping. These large iron objects can be struck by mechanical devices — solenoids — much like mechanical bell clappers.

The wiring and the mechanics will be plainly visible — no attempt will be made to conceal any mechanism or wiring.

Switches that activate these machines are triggered by a simple keyboard located at a central position (within viewing distance of all the machines and of the pipes or beams whose vibrations they control, so that visitors might hear what depressing each key does.) Visitors are invited to sit at the keyboard and “play” the building. Some keys might trigger machines that activate the specific structures gradually — a quick tap on some keys might produce no result, but a steady depression would allow oscillations to build up and a sound to emerge. A handwritten legend above each note group will describe which part of the building that note activates.

(Possibly the keyboard could be coin-operated. It takes a few Kr to make it active for a few minutes. This would emphasize the mechanical nature and place a time limit on "performances".)

The machines that activate the pipes and crossbeams would not do them any structural harm or damage. There would be no danger to the building or the visitor.