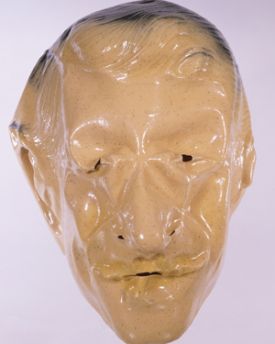 I picked up a mask of Salinas, the notorious ex-president of Mexico, when I was in Mexico City some years ago. Children begging on the streets would wear this mask of this well known piece of human scum and dance gaily in the streets, their hands out to passing motorists. It made a lovely piece of political commentary. The levels of meanings between the happy dancing, the mask, the begging and Salinas' then recent exploits made my head spin.

Later, I had one of these masks at home and, having removed it from my head some days earlier, it lay on the floor of the closet inside-out — and I noticed that I could still vaguely tell who it was, though many of the features were now blurred and indistinct. It seemed to thereby refine this face of power — to distill it to its essence. Or at least it had a mysterious creepy quality that the correct side of the mask obliterated by being too cartoonish and literal. The face of power, by being blurred and turned inside out, was somehow more accurately revealed. The way squinting allows one to see more clearly.

I began to photograph as many of these masks as I could find — and to print them as if they were banners — as if they could be flags or hung on the outside of buildings like the giant Stalin or Mao faces of old. The rubbery "flesh landscapes" maybe tell us more about ourselves and our relationship to politics and power than about the politicians themselves.

The "Huh?" posters — images of Bush and Gore masks — were sniped during the 2000 presidential election campaign.