On Halloween morning, a week before Election Day, David Byrne, the musician and artist, stepped out of his Greenwich Village town house to check on the status of his campaign to share his political opinions with the citizens of New York. He turned west on Twelfth Street and began searching for posters. "Hopefully, some went up overnight," he said. "The election is getting close."

Last week, posters designed by Byrne began appearing on scaffolding in New York, Los Angeles, and Chicago. Half of them depict a big, glistening, white plastic mask of Al Gore. The rest are masks of George W. Bush. The resemblance is not perfect. Gore's mask looks a bit like Morton Downey, Jr., and Bush's calls to mind Howard Baker, or Howdy Doody. With their tiny black eyeholes and toothy political grins, the images of the men fall somewhere between cartoonish and sinister. Printed beneath each, in bold type, is a single word: "Huh?"

"I guess it's my trying to express what I've heard expressed over and over—that nobody actually likes either of these guys," Byrne said, in that solemn guileless voice of his. He was walking uptown, wheeling a blue sticker-covered bicycle. His hair has gone gray, and he has a closely trimmed silver goatee. Nobody seemed to recognize him. "My friends are really surprised that I'm not actually the one out there putting the posters up with a bucket and glue," he said. "I tell them it doesn't work that way. It's a business." To get his three thousand six hundred posters displayed, or "sniped," as the practice is known, he'd hired a sniping company. "There are rates for specific neighborhoods, and for how long they'll be up, and it gets expensive," he said. "It makes you think. How much do you want to spend to get on your own little soapbox and make your own little statement?"

For Byrne, the answer is a bit over ten thousand dollars. That's a lot more than he spent in 1984, when he last sniped a pair of election posters. One was a photograph of President Reagan with the tag line "Actor." The other featured two photographs: a field of sunflowers with the word "Choice" underneath and a bombed-out landscape with the word "Vote." It didn't quite work out as he'd planned. "I didn't have an understanding of how much it costs to get a certain amount of coverage," he said. "I wanted these new ones to be more ubiquitous. So I paid for it." 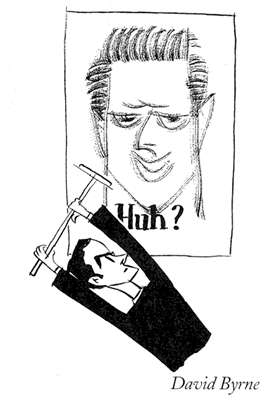 As Byrne worked his way north, the posters weren't very ubiquitous. Not until he got into Chelsea did he come upon the first one. There it was, the smiling face of George W., perched, unfortunately, a full story above the sidewalk. "Worse, he's alone!" Byrne gasped. There was no Gore nearby. The point was kind of lost. "The snipers couldn't guarantee they'd be next to each other," he said. "Well, they could, but it was out of my price range." He moved on. Half a block later, there were more snipes: this time, a proper pair. Byrne stood back and admired them for a moment, then whipped out a little digital camera and snapped a picture of his creation. Two older women walked by, followed by two construction workers, none of whom appeared to notice the posters.

"Getting feedback on something like this is strange," Byrne said. "I've intentionally not put my name on it, and I don't think I'd walk up and ask someone what they think." He looked some more. "But when you put things out there that just blend in, you become one of the 'they' entities. Like when people say, 'Hey did you see "they" put up these posters?' You get to join the ranks of that élite club of people who do everything."

He was about to hop on his bike when something made him chuckle to himself. "The posters look like they'll be good to draw on," he explained. "Plenty of white space." The prospect of obscene graffiti seemed to please him.

After he'd ridden off, people continued not to notice. Fifteen minutes of surveillance revealed little except the fact that most people walk with their heads down, especially on a chilly fall morning. But, finally, a young man wearing white face paint with a bit of fake blood dribbling from his lips stopped to check out the masks. His pronouncement: "Scary."