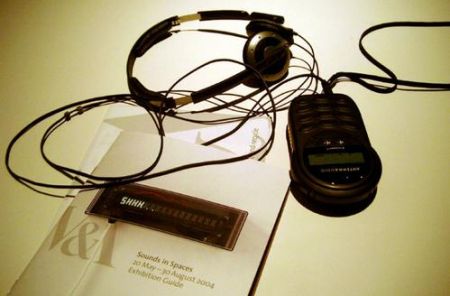 Audio installations by David Byrne, Cornelius, Jeremy Deller, Faultline, Simon Fisher Turner, Elizabeth Fraser, Leila, Roots Manuva, Gillian Wearing, Jane & Louise Wilson: "Shhh... is an 'invisible exhibition' taking you on a sonic journey through the V&A. From the magnificent Raphael Gallery to the grand Victorian stairwells, a diverse group of leading artists and musicians have created unique responses to the objects and spaces in the museum. Pick up your headphones and take part in this unmissable experience."

From the exhibition questionnaire:

Why did you choose your space?

Well, I mostly focused on non-spaces—the parts of a museum that are not focused on very much, but are absolutely essential—the ramps, corridors, stairways and restrooms. At the V&A some of these spaces are particularly beautiful and unique to this building, its situation and its history. For example, there there are incredibly ornate tiled stairways—an ordinary means of conveyance transformed into veritable temples (this one was not available for mounting an infrared trigger, but it inspired me)…the historical (listed!!) handicapped toilet and the various ramps which have obviously been added more recently to make wheelchair access possible. These latter are modern fairly claustrophobic and awkward architectural spaces that are typical of the contemporary desire to make public buildings truly accessible to all. They’re also typical of our retrofitted world, where an awe-inspiring hall filled with a jumble of fake antiquities meets a narrow completely incongruous passageway. It’s great, in other words.

How did you get the ideas behind your piece – was it the architecture or objects in the space? Was it the way that the space is used? Was it the acoustics or the feel of the space?

I recorded sounds that would typically be heard in the spaces I focused on—flushing toilets in the loo, dripping taps, footsteps in the ramps and mobile phones that we inevitably hear echoing throughout every architectural space in the world. I recorded these things in situ, and then edited them to become more structured, musical—sometimes adding some singing or “overdubs” of my own. Is that cheating? Sometimes the footsteps and dripping taps became rhythmic beds, inspiring a short tune as if one were hearing it to oneself—inside your head. Which you are—you’re wearing headphones.

What do you want the visitor to experience when listening to your piece?

There’s a little bit of trompe l’oeil audio involved in my pieces—I do hope that someone hearing a mobile phone ring on the recording will turn to see if someone is answering it—or maybe quickly check their own pockets or purses—or someone hearing a recorded toilet flush might believe briefly that there is a person about to emerge from a nearby stall. But I soon break this possible illusion by forming these ambient sounds into musical beds. Art intrudes.

Then, when this artifice becomes obvious, I hope that the effect will be an odd and strange incongruity between the interior private world of a headphone wearer and the sounds and “music” which mix the interior world with the sounds one expects to hear around one. It’s the dislocation that always happens with people like myself who are often listening to their own music in public spaces—we’re in our own world and in a public world at the same time—one might be intimate, interior, emotional, confessional, private—and the other is social and completely democratic. These two seemingly opposite mental spaces exist simultaneously for many of us as part of our daily lives….it’s a weird psychic contradiction that I myself live with daily with but haven’t figured out yet. Like hearing voices, I guess.

Maybe by choosing the material I have I’m making this jarring simultaneity of different worlds obvious and apparent to myself—and to the listener.