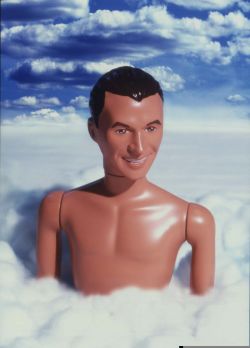 Psychological/emotional portraits of my dollself. Myself calm as I go up in (mental?) flames. A happy man drowning in love?

Making a doll of oneself is an act of real psychological healing and of possible personal danger. To be liberated from one’s own appearance — to see and feel what one always feels to be a part of oneself, one’s own looks embodied in an outside thing, a little homunculus, separated from one’s own flesh and blood, out in the world — brings a sense of freedom, and with it, some feeling of imminent danger.

A little plastic offspring… in love, in pain, pissed off, ecstatic. I want to help him, but I don’t know how. And I don’t even know what to call him. I hope he’s alright. Maybe he will do the things that I’ve always dreamed of… and maybe he’ll suffer the accidents of fate that I’ve avoided.

It was first attempted with computers. I had my head scanned with a laser in Emeryville, Ca., but in the end the Luddites won this round. We ended up, the designer Stephan Sagmeister and I, begging Yuji Yoshimoto who makes giant super realistic plastic candy bars and Cheerios for Saturday morning commercials, to sculpt real dolls of me expressing four of my typical moods — pissed off, crying, stupidly happy and dull gaze.s. The result had just the right amount of unreality. It was really odd, as you might expect, to see my little self, to hold my little self (no Little Elvis jokes please!) and to see him packed away in his little bubble-wrap coffin.