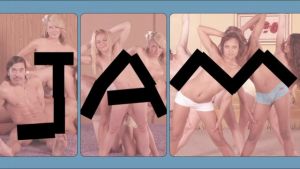 Some time ago, in between working on our Here Lies Love project (the song cycle about Imelda Marcos and Estrella Cumpos) Norman Cook approached me about collaborating on a song not connected with that project. Norm sent some tracks for me to sing/write over, and, as I have done in the past, I initially sent back a scat vocal so he could hear the melody and structure (verses, chants, choruses, etc) without real words attached. Norm liked where I was going so I began to work on lyrics to fit the melody I'd sung. Little did I know this song would be the result.

Norm's track was pretty infectious and upbeat, so a dark melody and lyrics would be out of the question. His track seemed to be a mashup of calypso, African and funk elements—which might be why he sent it to me in the first place. Lyrically it wanted to be some kind of celebration of… something.

Often when I'm writing lyrics I carry a micro-cassette recorder around in my pocket or backpack; if a phrase springs to mind that matches the meter of the song in progress I whisper it into the recorder. I must look like a madman, but then there are a few of those in NYC, so no one notices. (I reference this nutty behavior in the lyrics.) In doing this I don't censor myself—any phrase that fits is added to the list. Later, some narrative thread often emerges and a large percentage of the verbiage gets tossed.

I've written elsewhere about how lyrics emerge in this process. Some assume that not starting with lyrics implies that I don't have anything pressing to say—but that's, well, not exactly true. Although calling these lyrics pressing might be asking for it.

What's it about? Well, in a way the video that Norm had done captures it pretty perfectly. What exactly IS happening in between my toes, anyway? It's all slightly loopy innuendo, ecstatic, sexy and borderline disgusting—and this video pretty much takes that vibe and runs with it.

The song will be available to buy digitally on 7th July — there will be a link on the BPA Myspace page. The album itself, under the moniker Brighton Port Authority, will be out later in the year.