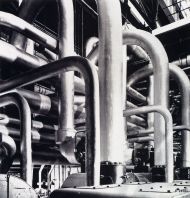 The process has been a bit like diving into the unconsciousness of the historical (hysterical?) European Mind in the hopes of discovering what kind of animal we are evolving from. Music tells us these things in the manner of a dream that we, in most cases, don't understand, at least not with our waking minds.

I know I don't understand much of what it is that fills me up, and that much of the work on this project, or any project, is a process of trying to discover what is inside yourself. And half the time the work itself tells you, but you don't understand what it's saying until many years later, which is okay. I'm not saying it's ahead of its time. It's probably just about on time, but none of us have any perspective on what we are doing, or why we are doing it, until years after the fact.

When I first began this work, I was reading a lot of myths. I had, and probably still have, the possibly naive assumption that these legends and myths might function as kind of primal stories, from which all contemporary movies, TV sit-coms and novels emerge. It is the oldest story known to us, the Sumerian Epic of Gilgamesh, and it struck a resonant chord in me. This tale is sexy, action-packed, mysterious, gentle, brutal and spiritual. It speaks of, among other things, relationships between nature and culture, people and civilization versus animals and nature and about immortality and death. The old story dealt with many of these themes simultaneously in a way that seems very contemporary, in a way that has a lot of relevance to a lot of things that we're thinking about now.

Many of these concerns came again to the surface and were widely discussed during the Industrial Revolution in Europe and North America. It seems to me that this was a period when most of the ideas that we live with now, most of the concepts and feelings we think are so "modern" — like nature being beautiful and cities being ugly, like the assumption that God is a part of Nature, and Man not being a part of that Nature — once again become common currency. Out ideas about the concept of progress, about work, machines, sex, love and the spirit were largely generated during the advent of machine culture. It's strange to see that we believe most of the same things now, even though this industrial culture is on its way out. It's even to the point of being preserved in museums.

We've moved on to an "information culture," a "software culture," or whatever it is. But it's not really a culture of big machines anymore, We think of them as relics. And yet we still live the biases, assumptions and beliefs that come out of this age. We are filled up with these ideas in our schools, through out newspapers, our televisions, our music, art and literature.

One of the personal discoveries I made while working on this project is that we're a lot less "modern" than we think we are. For the most part, we're living and breathing in a new world, while thinking and feeling in an old one. We need to take stock, to become aware of our prejudices and biases, before we can take the next step.

So my attempt at taking stock has been to write music evocative of this period in our history. I've tried to write music that draws a lot from the Romantic composers. I wanted to be able to sympathize with those who feel the romance of the factory. The beauty, the power, the possibilities of the machines that would change the world.

The Forest is a poem on death.

The music for The Forest is unlike anything I’ve ever done before. I wanted somehow to evoke the romantic feelings of the period in which the story has been re-set, the mid-eighteen hundreds. I wanted to be about to sympathize with those who feel the romance of the factory. The beauty, the power and the possibilities of the machines that would change the world. I’ve tried to use this music to get into the heads of our ancestors, both the Europeans and the ancient Sumerians. Some of the music borrows from other sources as well, old style film-music mainly, which is not surprising, I guess because that music, in a way, was a continuation of the romantic tradition from the nineteenth century. While the classic composers were busy with serial music and dissonance (machine allegories of a different sort) the music of movies became the sounds that people came to associate with feelings of awe, mystery, adventure, terror anguish and joy.

Sometimes the music can sound kind of corny or a little bit too much, but in a way, it might express better what people were feeling at the time more than modern or contemporary music. So, it helps me sympathize with and understand what it is we’re made of.

Something that’s not too easy, given the biases I have within me. I tend to see factories as Blake did, as “dark Satanic mills,” and to view the mechanized view of the world as and its inhabitants with a great deal of skepticism. So this music helps me see things from the other side. (And it’s fun.)