We are amateurs. As amateurs, we took an interest in recent (and some not so recent) neuroscience, cognitive psychology, economics and sociology studies. We saw that perceptual, cognitive and social decisions are often dictated by our own skewed view of the world… a view that that is not objective reality. We suspect the influence of contexts and biases: perceptual, cognitive and social, may be dictated by more than purely rational models. This is not a judgment, but rather a view of how things appear to be. As amateurs, we explored in our own self-guided way. We are outsiders, but passionately interested ones.

In order to experience and familiarize ourselves with this work we visited labs in, amongst other places, London, Paris, Barcelona, Stockholm, Boston and New York. On a visit to Copenhagen we were picked up in wheelbarrows tethered to bikes by one of our partner labs, all while discussing choice blindness experiments. 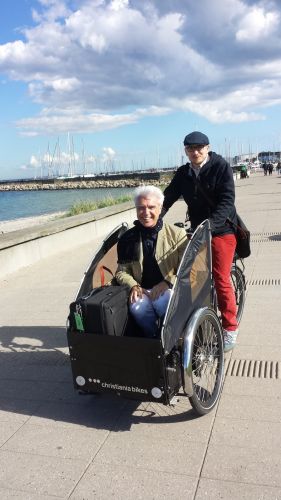 In Barcelona, we donned rather bumpy motion capture suits and were embodied as a little Spanish girl who confronted a nice mother and a mean mother. For a small child, even a nice mother is a somewhat terrifying thing. We began to see the work of both science and our brains as a kind of theater—and experience as a story our brain tells us. 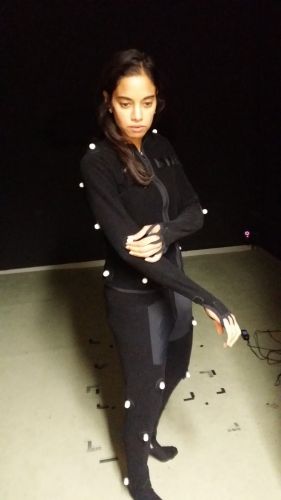 We imagined that others might find this work interesting, so we focused on how that might be accomplished. We wondered if others could experience some of what we had stumbled on, and how we, as well others, might understand and enjoy some of this in a visceral way. We assume that to experience an experiment provides a richer understanding of its concepts than being told about it. The word ‘experiment’ derives from the root word ‘experience’. So, to us, this series of immersive rooms in which one would have experiences seemed a logical way to engage with the work they were doing. Information is available everywhere, but experience is unique and has a growing value in a digitizing world. We decided each lab’s experiments should be translated into physical experiences.

We did not want to distort the work of the scientists whose work we admired; however, we knew it would have to be adapted. We have kept in contact with the labs, and they have generously commented on what we are doing.

What is the story?

Our brains do seem to write the “play” of what we experience in real time. The "play" uses “sets” built of our attention. The “script” uses a limited vocabulary (our senses), and writes to construct a world that is useful for us based on grammar (our memories and biases). Our experiences, alone and with others, write and rewrite the play. It is never fixed—it’s constantly evolving—we operate on “best guesses.” As Anais Nin put it, “We don’t see things as they are, we see things as WE are.”

We evolved to fit the natural world we most often encounter; when we face experiences outside of what is common (as happens in Neurosociety) that is when we can see and experience what our brains are doing. The unusual reveals the ordinary.

Like many plays, our project consists of three acts. Act I (Game Show: Moral Dilemmas) demonstrates how the vocabulary and grammar in our brains affects our moral behavior and our connections with others. Act II breaks these decisions down, and shows how our pre-conceived ideas build the grammar of our decisions—even electoral decisions (Classroom:Predicting Politics). Act III delves further into our sensory vocabulary (White Room: Equiluminance, Being Britta, and Rhodopsin).

Neurosociety like any such project will expand as we add more experiences in the future. There is a story—the perspective each of you took here is the narrative.

Some books we read (if you’re curious about any of this)—these are all non-technical books. This list could be twice as long, but here’s a start if you’re interested:

The Tell Tale Brain by Vilayanur Ramachandran
He is the originator of the “rubber hand.” Lots of wonderful speculation is in this book.

Moral Tribes by Joshua Greene
What affects our moral choices–are we only moral and fair within our own tribes?

The Moral Economy by Samuel Bowles
We make pro-social decisions given the right framing.

Just Babies: The Origins of Good and Evil by Paul Bloom
Do even babies have a moral sense, a sense of fairness? Is empathy always a good thing?

Subliminal by Leonard Mlodinow
How much of what we act and do is determined by unconscious forces?

Sleights of Mind by Stephen Macknik, Susana Martinez-Conde and Sandra Blakeslee
Magicians and magic use and expose the quirks of the mind.

The Invisible Gorilla by Christopher Chabris and Daniel Simons
We often don’t see what happens right in front of our eyes.

The Righteous Mind by Jonathan Haidt
How do we make moral and political decisions?

Thinking, Fast and Slow by Daniel Kahneman
Our intuitive vs. rational mind–how they work together, or don’t.

Incognito: The Secret Lives of the Brain by David Eagleman
Much of what we are is unknown to ourselves.

The Brain: The Story of You by David Eagleman

The Moral Animal by Robert Wright
He explores how we evolved to be what we are.

List of Partner Labs:
The ultimate reference and checks for all ideas has been, of course, our Neurosociety partner labs that are listed here alongside our gratitude and appreciation.

Our scientific consultants Julia Harris and Elisabeth Engl were indispensable references as well.