The Voting Booth Project: A group exhibition curated by Chee Pearlman. A group of designers and artists re-imagine actual Florida voting booths from the 2000 Presidential election, commenting on design, democracy, and related themes. 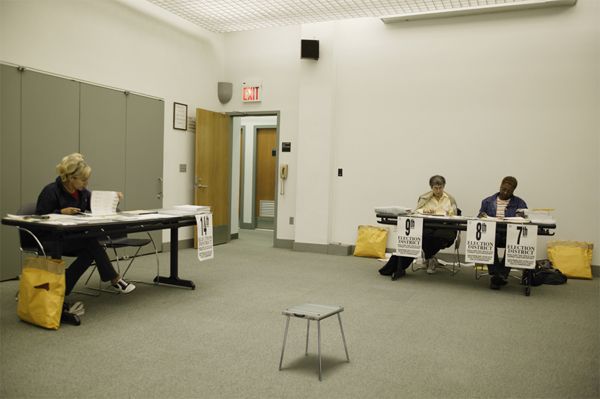 “I love the voting process. Visiting public school cafeterias and mingling with everyone who lives in the neighborhood. But maybe we New Yorkers have it easy — in other places the process might feel intimidating, difficult & confusing. Like Alice after eating the cake.” —DB

The exhibition examines the impact of design within a broad cultural context by inviting designers and artists to embellish, comment on, or transform objects that have been inextricably linked to the controversy surrounding the last Presidential election. In the state of Florida, where 537 votes separated the Bush/Gore race and roughly 175,000 ballots were thrown out of the final count, fallible voting devices and problematic ballots sparked debate and brought international focus on the ways design can affect democracy, launching the phrase "hanging chad" into public consciousness.

First put into use during the 1960's, the Votomatic is a portable, lightweight device, essentially an oversized briefcase containing four screw-in legs and a series of fold-out flaps that connect to form the base of a voting cubicle designed to hold a punch-card ballot. Participating artists and designers were each given a booth and invited to respond to it however they wished in order to create their own personal, political, or purely aesthetic statements.

The resulting works range in media from drawing, painting, photography, graphics, sculpture, textiles, and video, while a selection of mixed-media works features electronic and/or sound components. Imagination and ingenuity abound in such pieces as George of the Jungle, graphic designer Abbott Miller's towering 10-foot booth from which suspend linked chains of more then 1,500 red plastic monkeys; Playing with Fire, architect David Rockwell's "matchstick booth," painstakingly assembled from thousands of wood splints and rice paper; The Occasion, an evocative work by artist Maira Kalman incorporating an embroidered cloth in the style of an antique sampler with a quote from Lincoln's 1862 address to Congress; and Hindsight 20/20, in which architect Robert A. M. Stern's clever use of rearview mirrors places the voter firmly in the driver's seat.

"As vehicles for democratic expression, the booths serve as ideal catalysts to engage artists and designers in a visual dialogue on design and democracy. We couldn't be more delighted with the full range of approaches taken by the design and art communities, from decorative to conceptual, and from playful to powerful," says exhibition guest curator, design critic Chee Pearlman.

The Voting Booth Project is a collaborative effort initiated by Dean Paul Goldberger, Kenneth Lerer, hotelier Andrè Balazs and artist Rick Finkelstein. Dean Goldberger was informed by Lerer about dozens of Florida voting booths acquired by Balazs at a Miami flea market. Upon hearing about Parsons' interest in organizing an exhibition surrounding these booths, Balazs immediately agreed to donate them for this purpose. "Parsons understands the importance of teaching good design and the profound implications of design," said Balazs.

For Goldberger, "There isn't any better recent evidence of design's vital relationship with the surrounding political, social, and economic environment than The Voting Booth Project. I am proud that Parsons, through this exhibition, will play a crucial role in expanding the debate over how best to conduct voting in our democracy. Parsons is committed to increasing its public role, and one of the first ways in which this will happen is through an enhanced program of exhibitions and public events."