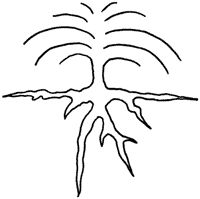 What are these drawings?

Why did I do them?

Will they be of interest to anyone else?

Do they need to be useful?

Well, I guess they’re a lot of things. Faux science, automatic writing, self-analysis, satire and maybe even a serious attempt at finding connections where none were thought to exist. And an excuse to draw plant-like forms and diagrams.

They began a few years ago as instructions to myself in a little notebook—“draw an evolutionary tree on pleasure,” or “draw a Venn diagram about relationships,” for example. Commands to myself to make mental maps of imaginary territory. These accumulated over a few years until the impulse was spent. Maybe it was a sort of self-therapy that worked by allowing the hand to “say” what the voice could not.

Irrational logic—I’ve heard it called that.

The application of logical scientific rigor and form to basically irrational premises. To proceed, carefully and deliberately, from nonsense, with a straight face, often arriving at a new kind of sense.

But how can nonsense ever emerge as sense? No matter how convoluted or folded, it will still always be nonsense, won’t it?

I happen to believe that a lot of scientific and rational premises are irrational to begin with—that the work of much science and academic inquiry is, deep down, merely the elaborate justification of desire, bias, whim, and glory. I sense that to some extent the rational “thinking” areas of our brains are superrationalization engines. They provide us with means and justifications for our more animal impulses. They allow us to justify them both to ourselves and then, when that has been accomplished, to others. “The hope that a mathematically unique solution will emerge [as an explanation of nature] is as faith-based as intelligent design,” says Leonard Susskind, inventor of string theory.

This might not seem like a very optimistic perspective on intelligence, but even viewed this cynically, the result of centuries of this cerebral activity has produced a lot of beauty, pleasure, and magnificent, well, stuff.

I watched a nature documentary on my laptop with my daughter on a train today, and we saw creatures from the ocean’s depths caught in the glow of deep-sea submersibles. Some of the creatures had never been seen before, or were not even thought possible. Things that spew time-delay fireworks, things that live where life was thought to be impossible, undersea “lakes”, a fish on a kind of stalk. Well, we both agreed that they would have seemed preposterous, imaginary, and unbelievable, if the camera hadn’t filmed them.

So, extrapolating from Mother Nature, if you can draw a relationship, it can exist.

The world keeps opening up, unfolding, and just when we expect it to be closed—to be a sealed sensible box—it shows us something completely surprising. In fact, the result and possibly unacknowledged aim of science may be to know how much it is that we don’t know, rather than what we do think we know. What we think we know we probably aren’t really sure of anyway. At least if we can get a sense of what we don’t know, we won’t be guilty of the hubris of thinking we know any of it. Science’s job is to map our ignorance.

Some of the typologies I’ve drawn on—wine descriptions, East Village clubs and bars, medieval war machines—are terms that are possibly obscure. Therefore I’ve written some paragraphs that might give a hint as to what these names, classifications, typographies and categories refer to; these explanations will either illuminate my intentions or simply annoy.

Lawrence Weschler, in his recent book Everything That Rises: A Book of Convergences begins to ask where these connections come from. He asks if the similarities in the branching structures of neurons, trees and genealogies mean that we have a predisposition towards making things fit these structures. Do we see that which we are? Is that both the limit and form of our perception? Do we rule out other ways of mapping and organizing as a result? And if this is true, how does a structural pattern evolve to become a way of seeing and thinking?

I think these connections go even further.

I see recent news photos that (unintentionally?) mimic Caravaggios, others that look exactly like images from Star Wars, the body attitudes of the Loas of Vodou or of classical Greek sculpture. Postures, poses and perspectives keep recurring over and over. As if Jung’s archetypes—characters, relationships and stories imbedded in our thoughts—unconsciously urge us not only to psychologically label situations and relationships, but also to gravitate towards certain images and specific angles in our image choices. The picture editor in our heads. I don’t think every photojournalist, for example, has a childhood memory of classical art that they once saw on a school trip that they use as an unconscious reference, though some might. I think rather the journalists and the classical artists are more likely drawing on the same deep internal sources. Here indeed is intelligent design.

By that I don’t mean a far-off divine intelligence; I mean that the mental structures themselves, the trees and branches that predispose us to see things in certain ways, evolved over millions of years, are self-replicating and “intelligent.”

So, here I am pencil in hand, poking around in the dark—wait, is it a pencil or a flashlight? …that’s it! The pencil is a flashlight, and it roughly illuminates a tiny part of the above “intelligence.” Maybe just enough to get it all wrong, but the puzzle pieces are us—we can recognize familiar pieces of ourselves, and so they are scary, fascinating and lovable.