I had heard of David Hanson and his robot creations—the Einstein head and especially the robot of Phillip K. Dick that responded to questions from the public—but I had never seen one. At an event called Nextfest in New York, I saw a prototype of Jules, a fairly lifelike-looking head of an ordinary young man, slightly androgynous, who could change his facial expressions to simulate emotions. Jules could frown, smile and look slightly skeptical. In addition, Jules could make eye contact—of a sort. Hanson had rigged a system by which the thing could lock on to someone standing in front of it and then, within limits, follow them as they changed position. The robot thus appeared to be looking at you—which in a way it was. There were other robots at this event, but Hanson's seemed to me to be on the verge of something—something both truly uncanny and something that might cause us to question what is seeing, what are emotions and what is communication and conversation. 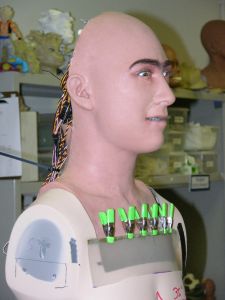 Hanson and I chatted briefly and later, when the organizers of “Máquinas y Almas" asked me if I had something that might be appropriate for the exhibit I immediately thought of contacting Hanson to see if he could program Jules to appear to sing if I recorded a vocal for him. By sing I don't just mean open and close the mouth—that wouldn't fool anyone. What we call singing is not just the vibrating of the vocal chords and the mouth moving to create the proper syllables and timbres; it's also tied to a host of emotions that play across the muscles and tissues of the face and neck. The movements of these muscles, the facial expressions, give us clues as to what the singer is feeling, what the singer intends to communicate and what the song means. Of course, a large percentage of this meaning is in the song itself—the sound and lyrics—but one of the reasons we enjoy a live performance is that we are given (visual) bonus features, clues that give us additional information about the singer, the song and about our immediate situation.

Hanson said such a thing was possible, so I suggested that we make the presentation very simple: just a young man, dressed in a nondescript, ordinary manner, standing in a room, singing to himself. Hanson suggested that this new robot be christened Julio.

Part of the enjoyment of seeing the various robots at Nextfest was experiencing a taste of the uncanny. The idea of the uncanny was proposed by Ernst Jentsch in 1906. He refers to the uncanny as something uncertain or undecidable which therefore makes us uncomfortable. [Freud disagreed—or elaborated on this]. He calls it un-heimlich, the un-home-like. His idea is that our psychological concept of home implies familiarity and comfort, a sense of ease, and, according to him, any concept we hold also implies the existence of its polar opposite—the un-home-like, the unusual, the unknown, the strange.

I love where this is going. It brings to mind an image of someone sitting in a comfortable chair, maybe with friends, and maybe they're having drinks—and at the same time Jentsch posits that layered over or under this image is the profoundly creepy, the deeply strange and disturbing. We're in the land of David Lynch and Hitchcock. ET landing in the familiar U.S. suburbs could be viewed this way, or the various living dead and vampire movies.

More recently Japanese roboticist Masahiro Mori proposed the existence of something called the uncanny valley. This “valley” is an area of emotional uncertainty and often revulsion experienced by an observer when a robot or computer animation (for example) approaches being human, is almost believable, but not quite.

He suggests that our emotional empathy with animations and robots increases as they get closer and closer to being human (or animal)—but then, at a certain point, they fall into the valley, and our empathy turns to disgust. In his view they switch from being a cute thing approaching humanity to a bad or faulty version of humanity. It is at this point that we see them as not merely slightly strange, but as a human with serious problems. If the creation can succeed in being a little bit better as a believable creature the feeling of revulsion disappears. For some viewers, recent films like Beowulf fall into this valley, while others find the almost humans acceptable.

Mori further suggests that this reaction might be innate—that it might be linked to our biological reactions to people who are physically or mentally ill—or to corpses. Evolution would have ingrained this reaction as a way of weeding out sick people from the social group. Hanson and others dispute the scientific veracity of the uncanny valley, but I think no one can doubt the strange and weird emotions that well up when confronted by one of these entities.

Knowing that singing elicits an emotional reaction from a listener and observer, I sense that encountering Julio might push some very odd buttons. I remember that my first encounter with Hanson's robot made me rethink what it means to see, to look. We think of seeing and looking as something optical, something the eyes do. But actually seeing something, and recognizing it, is a lot more than that—it is the act of “naming” the thing the eyes are locking on to. It involves other meta brain functions that often have nothing to do with optics or the muscles controlling the eye. If seeing were just the visual and eye-muscle behavior, then isn't that the same as what Jules does? And then isn't singing, and displaying the attendant emotions, the same as what Julio does?

We tend to think that our emotions live inside—in our “hearts” and minds—and that the cues given by facial expressions, for example, are 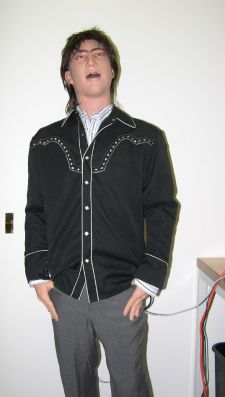 I think it's more complicated and more confusing than that. I sense that sometimes the effect can produce the cause. Smiling can make you happy. Scowling can make you aggressive and angry. Actors experience this all the time—many of them act by learning to produce the visual effects of an emotion—the posture and facial expressions, the tone of voice—rather than always having to summon up an interior emotion in order to self-generate those affects. (That's method acting, another whole topic)

So—if an entity displays the correct facial expressions, sounds and gestures, who's to say it's not “experiencing” the emotions? I personally still think it's not, as emotions trigger hormonal release, breathing changes and a whole range of other physiological changes, and they're not simply limited to what we see. They imply future action or inaction—they imply a set of behaviors guided and steered by the emotions we only see displayed in the face and voice. I love that Julio might make us confront some of these issues—that his emotional singing might give us a discomforting pause.