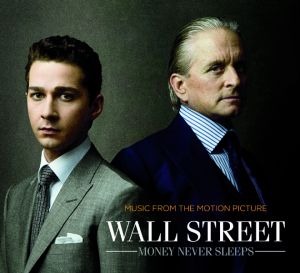 A 2010 sequel to Oliver Stone's 1997 Wall Street, the film takes place in New York and is based on the 2008 financial crisis. As the global economy teeters on the brink of disaster, a young Wall Street trader partners with disgraced former Wall Street corporate raider Gordon Gekko on a two-tiered mission: To alert the financial community to the coming doom, and to find out who was responsible for the death of the young trader's mentor.

The soundtrack was released on Todomundo! and many of the songs in the movie are either solo or collaboration songs the feature David Byrne.

"And yet something vital here works. There are, come to think of it, a lot of little things: buoyant yet haunting songs sung by David Byrne, whose vocal timbre brings back the ’80s all by itself..."
A.O. Scott, The New York Times, 23 September 2010

"Wall Street 2 gets four stars for old time’s sake — and for its music by David Byrne and Brian Eno, an appropriately retro choice."
Kate Muir, Times UK, 14 May 2010