An imitation corporate report, marketing and motivational agenda + business culture worldview. Maybe it’s not an imitation. It’s the sort of glossy large format prospectus that you might be handed at a board meeting in a room with a fantastic view — a lovely object, but who or what is really being sold here? It could easily be mistaken for a slick advertisement for something. Designed by Stefan Sagmeister, this book includes images from the Stairway To Heaven and Better Living Through Chemistry series, many of which were produced as billboards or outdoor lightboxes. 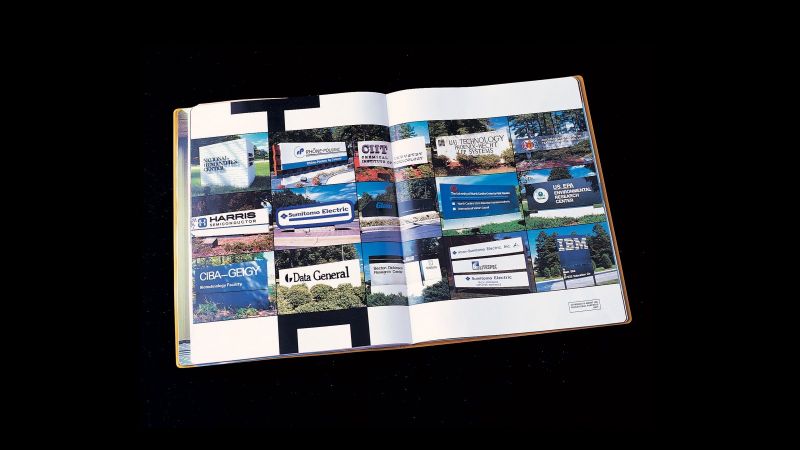 I was touring recently and one of my shows took me to a little town in Austria, near where Stefan had grown up, and where he began his career. This was pointed out by some of the local club staff, who knew Stefan when he lived there, and knew we had worked together. I therefore began to take special interest in the surroundings, to gain some insights into my friend and collaborator. It was a fall holiday weekend, and in a field down the road from the club there had been erected a huge tower of logs. A crowd was gathering and vendors were selling wursts and other tasty treats. Children ran here and there as darkness fell.

At the appointed hour the tower was set ablaze by large men, flames licked up the sides, the heat was immense and sparks flew into the air, threatening the surrounding houses and nearby forest.

Children continued to frolic in the glow of the fire, running amongst the shower of falling sparks. I said to a fellow musician that in America there would be so many fire restrictions, barriers and regulations surrounding a spectacle like this that its power and dangerous beauty would be removed, watered down and destroyed. Soon the flames reached the top of the tower, where a giant dummy of a witch was perched. All cheered as she went up in flames, bits of her rising to the heavens to set the pearly gates on fire. This it what it's like working with Sagmeister Inc.

To be honest, it's very difficult to describe our working relationship. To me it seems like a kind of telepathy. The vision, direction and attitude of a project are realized and apprehended very quickly by both of us, poorly articulated verbal concepts become clearer as they are seen in sketch, mockup or layout. And we're ready to go. We find ourselves engaged in a kind of play. As in creative play, not Broadway play. So there is very little talk or discussion at that point. Except for some laughter and my constant griping about text legibility.

On my Feelings CD package I knew I wanted to portray myself as a doll. It seemed a perfect image of contemporary consumerism, celebrity, blah blah blah. And I could look good, in a plastic-y sort of way. So it could be a gag, but with something to say. Something that sounds tedious in words, but hilarious in image.

We went through various attempts at getting this look right, from me inserting my head into a 3D laser scanner to computer renderings. None of it worked, and we knew it. Stefan soon realized it had to be "real"...and found Yuji, a model maker, in Brooklyn, who eventually made the final dolls.

Meanwhile, Sagmeister Inc. was taking the concept further, for example, developing type that would be made, actually physically made, on a snap-apart plastic model framework.

Other refinements followed, one of the best, in my opinion, was the rounded corners Stefan proposed for the CD booklet (these were, sadly, only made on the initial run). To me, this tiny touch referred both to contemporary groovy cyber design and all its clichés, and to the rounded edges of toy packages hanging at Toys"R"Us on 14th Street.

After this pleasant experience I approached Stefan about working together more collaboratively on a book project which was scheduled to come out in time for a museum show of my photo-based art in Trieste. The Italians suggested a "catalogue" and I countered with "what if it was more of a stand-alone book?" — a thing in itself, as they say. They liked this idea, loved Stefan's other work, and we were off on another nutty project.

The work that was being shown was inspired by advertising, motivational calendars, and corporate inspirational literature, so I suggested we use these kinds of things as models for this book. But Stefan soon pointed out that my idealized view of these materials outstripped the reality. In reality they were pretty boring, conservative and often very "tastefully" designed. I was not interested in good taste here, I wanted to immerse myself in the clichéd, the banal and the obnoxious, to better understand it.

But I think Stefan realized we had to take it a step further, to refer to these items that originally inspired us, but not copy them exactly, as we were creating some kind of hybrid.

I should point out that other than the pieces which were the focus of the show, the ones that look like ads, I wanted Stefan to "curate" the work that would be in the book. I brought piles of work prints, odds and ends, written and graphic, to his PENTHOUSE studio, and he choose, more or less, what would work...and then he, I assume inspired by what was happening, created his own work. The pages of corporate colors are all his, as are the "chapter headings" using motivational graphs and lingo. And likewise, I was inspired to create new work for the book and to write additional texts that would play off and link some of the images.

Then in a final perverse stroke, Stefan suggested it be sold in its own shopping bag, which would contain half of the cover text. Having worked with him before I knew that Stefan has a genius for charming clients (not me, in this case the publisher) into incorporating manufacturing innovations into the design.

Well, it worked in this case — the Italians loved the bag idea. Even if their manufacturing of this element left something to be desired. Sadly, the stodgy Yanks opted to lose the bag, but did achieve much wider distribution than the Italians ever would. So, the compromise, in my view, was worth it.