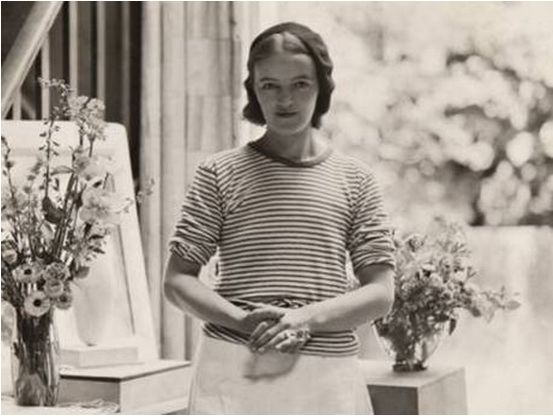 I visited the Tate Britain last week, and took in the Barbara Hepworth show on the advice of others-I’m not usually a fan of that era of abstraction. But, to be honest, the work was lovely and, more to my taste, the wall descriptions described a process by which she and her husband and collaborator (Ben Nicholson) came to make the kinds of work they did. Almost NONE of their creative decisions originated in what we might consider purely artistic concerns (form, colour, materials, subject). Almost all seemed to be driven by context and externalities.

Here, according to the wall texts, is the evolution of her artistic output, and what affected it.

In an early room was a series of sculptures - and it became apparent to Hepworth and her colleagues that the apparent artistic status of a work (which one might assume would translate into economic worth) could be adjusted and increased if it were clear that the artists themselves were involved in the actual carving of the stones. 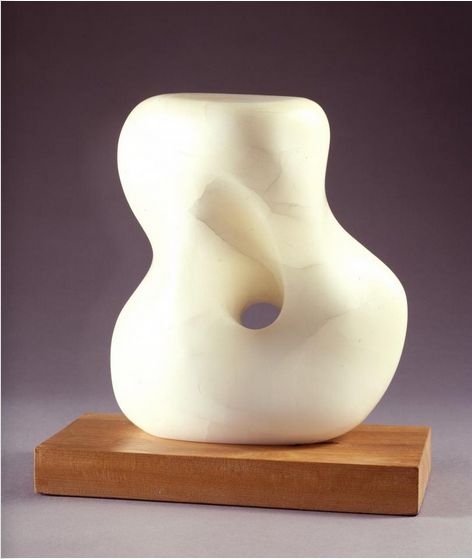 Though very outdated as an idea (Warhol and many others since have had others make their work and it doesn’t seem to matter) it still maintains a grip. I’ve been asked, “Did you make that yourself?” more than once, so the assumption is clearly still alive that the hand of the artist brings added value ($ and aesthetic value too). In the Renaissance a patron would negotiate in advance what % of the work would be done by the artist’s hand and how much by the assistant’s - and the price would be adjusted accordingly...in a big way too!

So here are Hepworth and Ben Nicholson and some of their contemporaries doing the same thing as the Renaissance artists did - pricing according to the extent of the artist’s personal involvement. 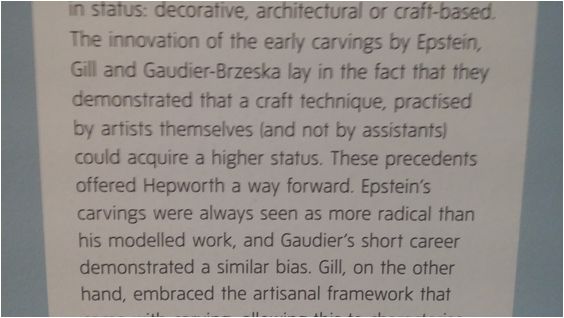 Some years later, the art market in the UK took a tumble, and Hepworth and Nicholson responded by making work that encompassed the practical utility aspect of crafts, and they adopted more affordable craft pricing to match. In contrast to the carvings mentioned above, these works were actually made by others, professional weavers in this case. Pillar, the piece shown to the right, is a lovely weaving/carpet/whatever. 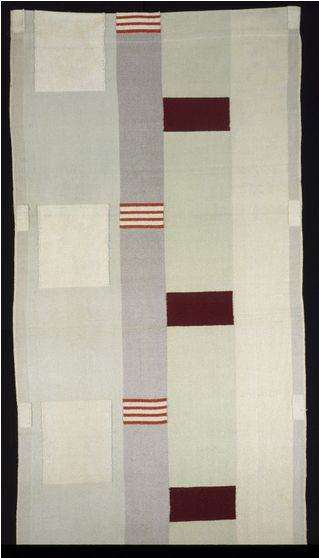 One question that comes up as I notice how these contextual forces shape work is this: is this good news or not? Is the fact that many artists (and musicians) are gently (and sometimes not so gently) pressured by extraneous (often economic) forces into using new mediums, new forms and materials- sometimes into completely untried forms of expression- is that good? We tend to tell the story backwards - looking at the cumulative output of creatives, and we marvel at how imaginative and inventive it is and as a result we assume this chronology of innovation was the natural and inevitable line of creative development - but it was anything but “natural.” Many folks tend to presume that artistic types should and do have more freedom than the rest of us (I’ve gotten similar queries - it turns out my life is more restricted in many ways than a business person's - possibly to my creative advantage). Well, we musicians and artists sometimes do have the option not to go work at a desk every day at the same hours- but we have other pressures and restrictions that are in many ways even more severe.

One could argue that those pressures and constraints are what force the inventive and creative responses that we tend to view as artistic (or musical) expression. However - the screws of poverty - an economic constraint - are not necessarily a recipe for innovative, creative output. Economic suffering does not necessarily result in great art. It’s not the pain itself that makes innovation happen, but the idea that there is a creative way to avoid it. As poverty itself isn’t an engine for creativity one hopes that all should be fairly compensated. 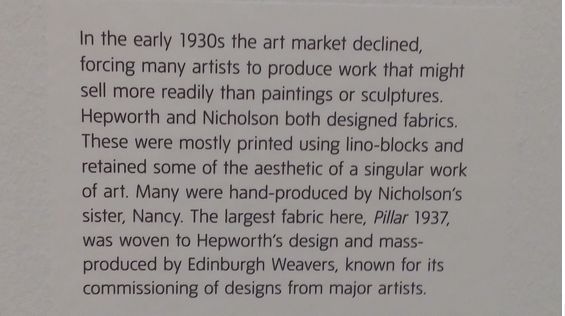 The next big influence on Hepworth was political. A raft of innovative artists, scientists and other creatives fled the rise of Nazism, and these creatives gravitated to the same neighborhood in London (Hampstead) where Hepworth and Nicholson lived and worked. They fed off and influenced one another and everyone’s work creatively jumped ahead by leaps and bounds as a result of the cross fertilization and mutual encouragement. These particular refugees kicked the locals’ assses into doing more innovative work. One might be tempted to point out that Nazism therefore had some beneficial effects - the intellectual and cultural diaspora fleeing the impending horror planted many scientific and cultural seeds wherever they landed. (Similar effects were derived by the diaspora that fled when the Ayatollah replacing the Shah in Iran, a dictator supported by the US, who longed to see his country Westernised... sadly, even the Katrina diaspora seems to have had a beneficial effect on the dispossessed and the places they landed.) 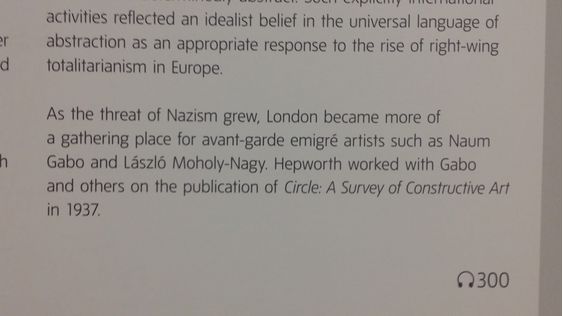 Back to Babs. So far, NONE of the forces that affected her or Ben’s work were purely aesthetic!

By the 50’s Hepworth was fairly well known and successful. Now she reversed the above process in a way - SHE now chose the context in which her work would be seen. She staged photo shoots so that her work would be seen by the public and collectors the way she wanted. Generally the context she chose and created was the context of no context, as is typical of art galleries and museums that show work against white walls with as much decor stripped away as possible. (Thanks for the phrase, George Trow.)

But the outside influences didn’t end yet - she was invited to design sets and costumes for theatrical productions - which, as with the experience of Kazimir Malevich many decades earlier, can be completely liberating, as the process, criteria and evaluation of one’s work is completely different in that arena rather than with visual art. 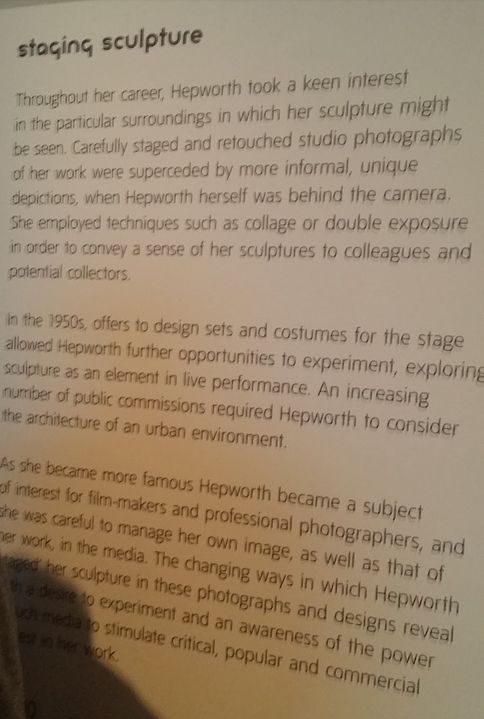 This determination to now define the context oneself was realized further via some films made about Hepworth that she obviously influenced. The juxtaposition of her work with practical industrial structures, and even with prehistoric megaliths is very deliberate - a way of saying - like these objects, “You know my work is both universal in its forms and timeless.” The combination of the quotidian and deep historic context is a forced context - one I happen to enjoy. It “explains” the work by placing in in a context after it has already been made. It is a kind of a post event retroactive explanation. 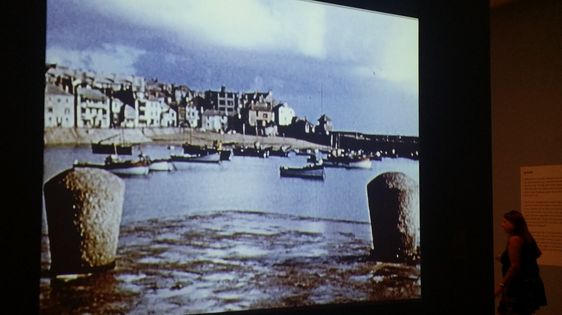 Lastly, in one final example of decision making that originated from outside, there is a room in the exhibit of large wood sculptures. Did she choose that material? Nope. The Brazilian hardwood was sent to her by a friend. 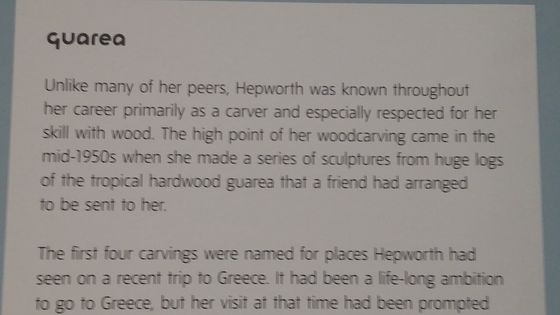 So, although we might like to think of artists (and other creative types) as free souls driven primarily by aesthetic concerns and their “feelings,” more often they and their work is shaped by extraneous events and non-artistic factors. How free are they really then? How much free will is at play here? Certainly they are free to respond to those external events and contexts in whatever way seems optimum for them. A decision, however, is forced upon them, but they do still have some limited freedom. They could have, for example, made ceramics instead of weavings and rugs when they were pressured to join the crafty world for economic reasons. They could have ignored that economic pressure, stuck to their guns and eventually (possibly) gone broke.

So, they had some choice, some sort of free will is in play here - they’re not robots that simply react. But in a larger sense many of their options were limited, they had a LOT less freedom of choice than one might imagine. And I’m going to argue that for them, and for us, this might be a good thing.

We like to think that free will, freedom of choice, and lots and lots of options are generally more desirable than having fewer - but, really, what we most want to do is to narrow down those choices and options to the ones that give us the best odds. We want fewer choices - less freedom. And if external forces do a lot of that initial deciding for us, then maybe that’s a good thing.

The other advantage of having your decisions partly made for you is that it forces adaptation and innovation. Every time Hepworth responded to some new contingency she embarked on a new path and widened the scope and range of what it was she was doing. Her depth as an artist grew by being forced to adapt.

Maybe that’s true for all of us. All our lives are constantly being shaped by external forces and events - we react to them and respond to them (sometimes based on unconscious internal drives of our own - another limiting and deciding factor) and, like the process we see in evolution, our ability to adapt to these forces, to changing contingencies, is what matters. To be fixed and always do the same thing is dangerous. Our flexibility, malleability and adaptability - that is what matters-that skill set is where we succeed or fail. When the world around you changes, will you find a way to adjust to it? To turn it into a creative advantage? That’s something we as humans have evolved to be pretty good at - to be able to change and not be absolutely set in our ways.