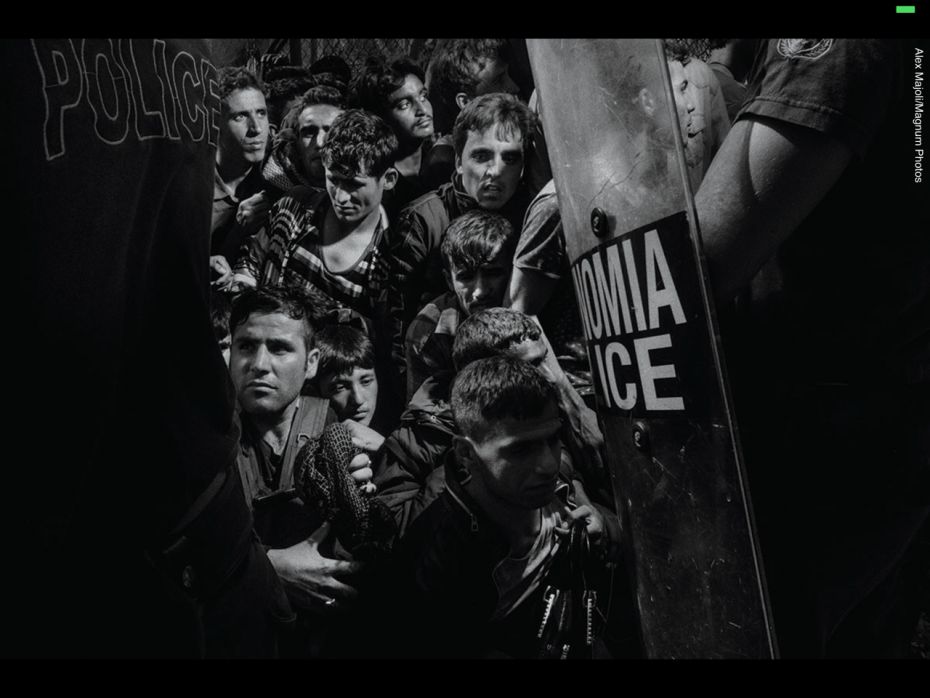 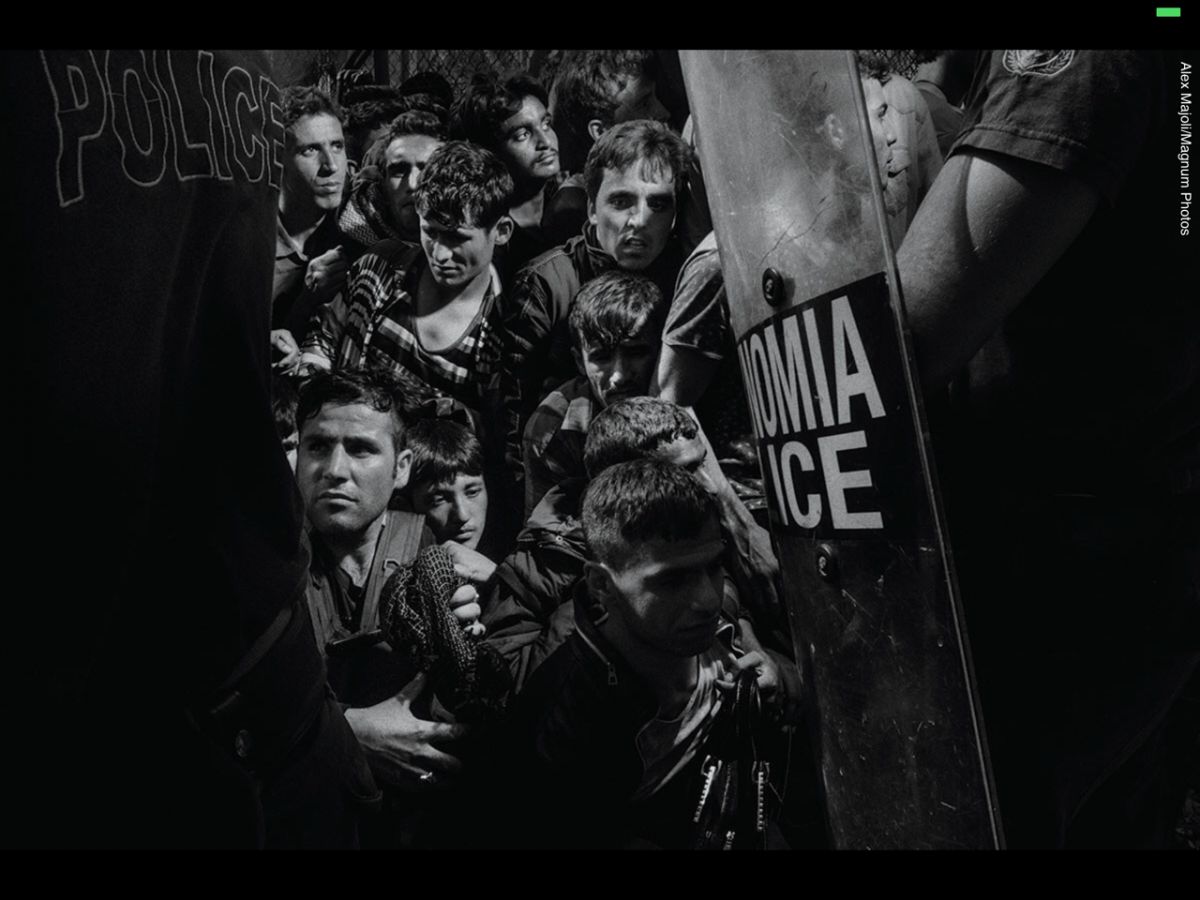 I have a feeling the above line owes as much to Yoko as it does to Lennon, as she had been doing thought experiment art pieces long before Lennon’s song was written. I thought I’d try a similar thought experiment.

Are we moving towards a world without borders? Is that a good thing? We already all share a common fate on the planet, we essentially share the same global resources, the same air, climate and oceans. So, in the widest sense, yes, we already live in a world without borders and the whole planet is increasingly connected. Does Zika respect borders? Does El Niño? However, we live in a world of tribes, cultures and nations, all of which see themselves as different from one another, and that is not an entirely bad thing either. We live with this contradiction, which is further complicated by the relatively free flow of money and capital.

We didn’t always have passports and borders. It’s a relatively new thing.

From the New Scientist article “End of Nations: Is there an Alternative to Countries?”, September 2014:

Before the late 18th century there were no real nation states, says John Breuilly of the London School of Economics. If you travelled across Europe, no one asked for your passport at borders; neither passports nor borders as we know them existed. People had ethnic and cultural identities, but these didn’t really define the political entity they lived in.

From the New Scientist article “The Truth About Migration: How We Lived Without Passports”, April 2016:

Other than in wartime, authorities worried more about people getting out. Roman and medieval laws kept peasants bound to their farms. External passports were mere requests for safe conduct, rather than restrictive documents determining where you could go, says John Torpey​ at the City University of New York.

The main reason [for this] was that an individual’s nationality had little political meaning before the late 1700s. The passport as an instrument of state regulation was born of the French revolution of 1789. At first, ordinary people were issued passes to control internal movement, especially to Paris. But after the king tried to escape, and foreign aristocrats attacked the revolution, the authorities started requiring such papers for exit and entry to the country. The revolution created one of the world’s first “nation-states”, defined by the “national” identity of its people rather than its monarchs’ claims. “This novel importance of the people and their nationality made identity papers integral to creating the modern state,” says Torpey.

Timeline video of the History of Europe (3000 BC - 2013 AD)—it's a bit long, I know, but stick with it and you'll realize that you don’t see nation states emerge until quite recently:

Empires and tribes used to add to their wealth and prosperity by usurping the territories of their neighbors and protecting what they then felt were now their own territories. Prosperity increased by accretion. The people in those usurped territories may have spoken other languages and maybe had differing customs – it didn’t matter. They now had a new lord and owed some tithe to him. Not much of a change for many people, really.

Conflict was rampant, and eventually it was seen by rulers that war and conflict were quite inefficient as means of increasing wealth – one could prosper well without the death and expenses of war by trading, forming alliances and consolidating one’s territories.

Later, as mentioned above, nation-states as we know them came into being; often the Treaty of Westphalia is credited with being the beginning of this idea, signed in 1648 this treaty recognized the sovereignty of what later became nations, though at that time they were empires ruled by monarchs, not nations as we know them. The monarch, this treaty said, now ruled a proscribed kingdom, and the monarchs’ successors were to rule that same geographical area. The geographical area took primacy over the monarch. Neighbors were forbidden from interfering in the internal affairs of these “nations.”

People began to identify with these geographical zones more than with whoever happened to rule them.

From the Wikipedia page for “Westphalian sovereignty” (retrieved May 5th, 2016):

In the Westphalian system, the national interests and goals of states (and later what became nation-states) were widely assumed to go beyond those of any citizen or any ruler. States became the primary institutional agents in an interstate system of relations.. The "Westphalian" doctrine of states as independent agents was bolstered by the rise in 19th century thought of nationalism, under which legitimate states were assumed to correspond to nations—groups of people united by language and culture.

This idea reached its culmination with the American and French Revolutions – America and France being republics, or what we now refer to as states. Prior to this, the idea that a nation had a common language and culture didn’t exist – and the idea wasn’t accepted automatically. To get people to believe this idea there was needed a long period of nationalistic propaganda – with all the attendant symbols: hymns to flags, common coinage, national educational systems that taught a more or less a common story of what was considered the nation and people. These and other means were used to create a sense of unity amongst what were previously disparate peoples.

So, that’s sort of the backstory – in summary: borders and nations are relatively new and they proved at that time to be a less violent and more efficient means, via trade, of adding to prosperity than not having the secure borders.

1. The planet has no borders. The physical world is all interconnected. CO2 emissions in China and the U.S. melt glaciers in Peru and subsequently Lima no longer has enough drinking water or electricity. Borders attempt to lessen those connections and allow for the avoidance of responsibility for one nation’s actions on others.
2. Global capital is essentially borderless. A company in London, for example, can be involved in extraction of resources, investment or manufacturing anywhere. In many cases, banks and corporations are not restricted by national borders. Money can move around fairly easily. Movement of money makes money – or seems to – we have places like Dubai that don’t make anything.
3. Labor, culture and commodities, however, are mostly geographically rooted.

For the most part people stay where they are; it’s risky and expensive to emigrate, and we like our familiar places and friends, though more and more people are now on the move. But usually if a corporation wants cheap labor it simply has to build factories in Indonesia, Mexico or China, where the people are – they don’t move those people to them.

The 3 givens above don’t always mix well – there are inherent incompatibilities.

When a U.S. corporation outsources its labor to Mexico or Indonesia, as is inevitable because capital is unrestricted by geography, the more expensive labor pool in the U.S. initially suffers, as has recently been confirmed.

But, taking China as an example, though the increased trade with them in the last couple of decades did in fact (as revealed recently) hurt middle and lower classes in the U.S., globally one might claim that there was a benefit. If one views employment from a global rather than from a local U.S. perspective it's possible that the overall rise in living standards of the vast numbers that were lifted out of poverty in China more than offset the decline of jobs in U.S....when viewed globally. Locally though, it’s has been a disaster.

Though politicians claim otherwise – as do many folks who are struggling – it seems the effect of NAFTA is still a matter of debate. The devaluation of the Peso around the same time maybe had an ever greater effect on outsourcing of jobs. Similarly, the outsourcing of jobs and manufacturing to China was not solely the result of a trade agreement. I was doing music tours at that time and often travelling to Mexico and it seemed to be that the knock-on effects were disastrous in both the U.S. and Mexico for everyone except the business owners and maybe the stockholders. Hard to believe NAFTA and the fall of the Peso were not somehow related, but OK.

But back to the Chinese effect and the global point of view. If a corporation can behave as if there are no borders then they can take that Godlike global perspective, and if indeed the outsourcing raises a substantial number of people out of poverty then they can claim they are globally not doing harm – though they may be viewed as a pariah back home. But the people in the various sovereign nations who must respect borders cannot take this point of view, or at least it’s very hard for them to take that perspective when they’re broke and their town is boarded up. To be realistic, though globally they may have helped lift many foreigners out of poverty they don’t have much investment in those places – in many cases they could care less about the education, medical or political system in those places as long as the factories and resources hold out. Ditto with the Chinese – all very well as long as their goods could undercut those made elsewhere.

But in many places there was pain. I toured around and saw lots of shuttered and boarded up downtowns – Detroit, sure, but also Cleveland, St Louis, Pittsburgh and more. It was shocking. Some are coming back, repurposed, but not all.