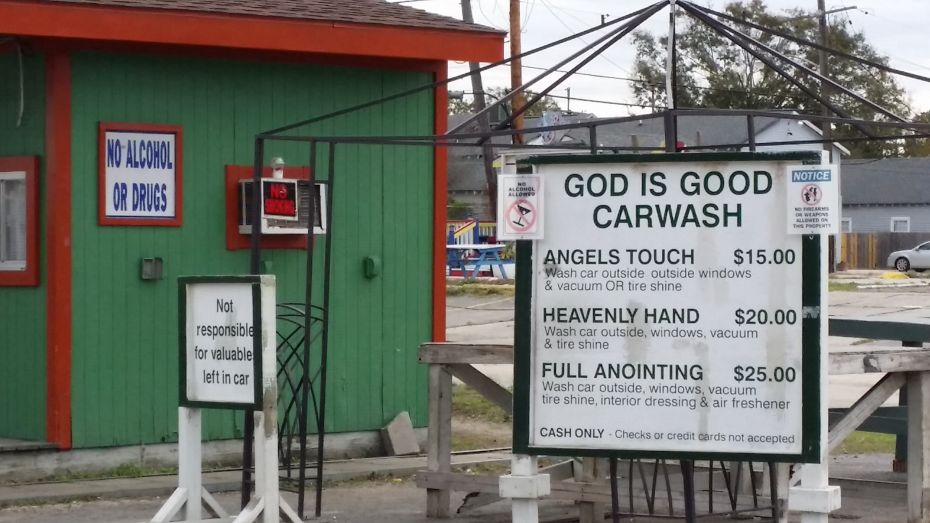 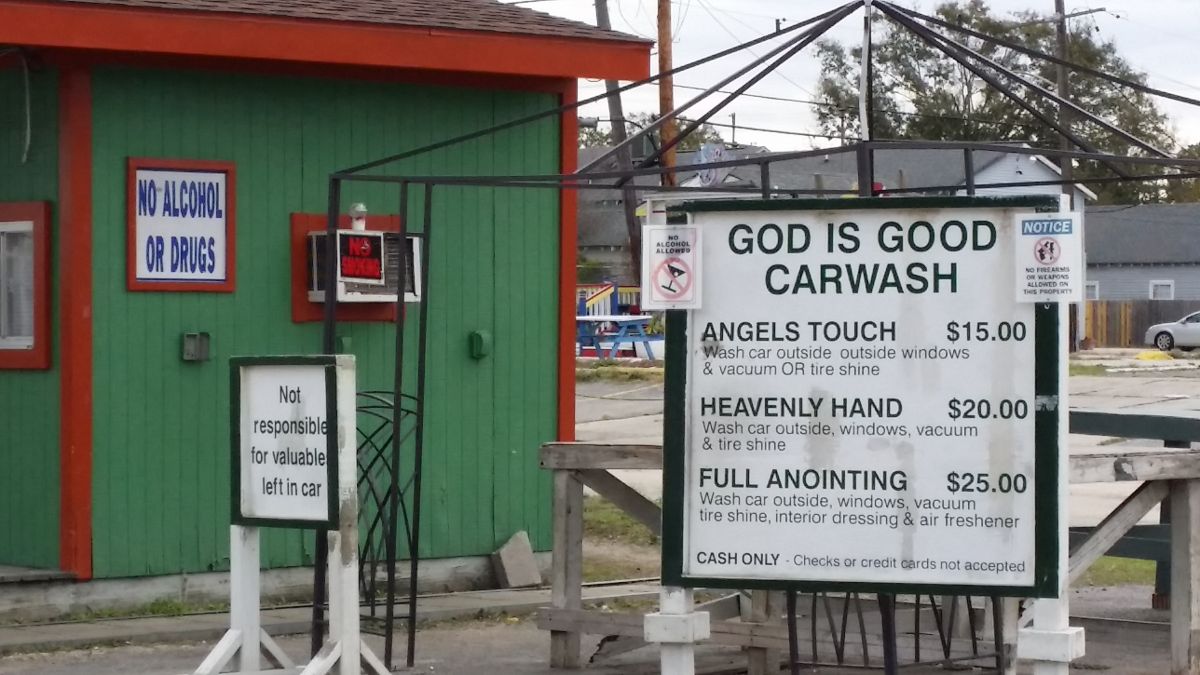 New Orleans is wonderful; the folks are generally generous, talkative and enjoy life. Black folks and white folks mix and come in contact with one another more than in many other US cities. But it’s also the victim of a lot of bad policies, corruption and sad decisions—the damage done by Katrina was not an accident, as has been explained in detail elsewhere (the Spike Lee doc When The Levees Broke is amazing) and all kinds of tragic policies have been heaped upon this city like so many knife wounds. It’s almost as if the city is being punished for being as generous, sensuous and fun-loving as it is. 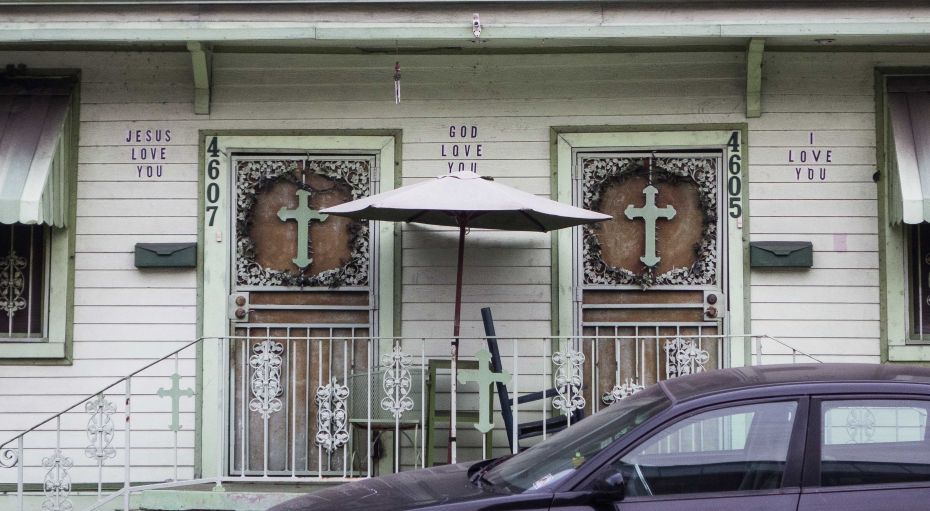 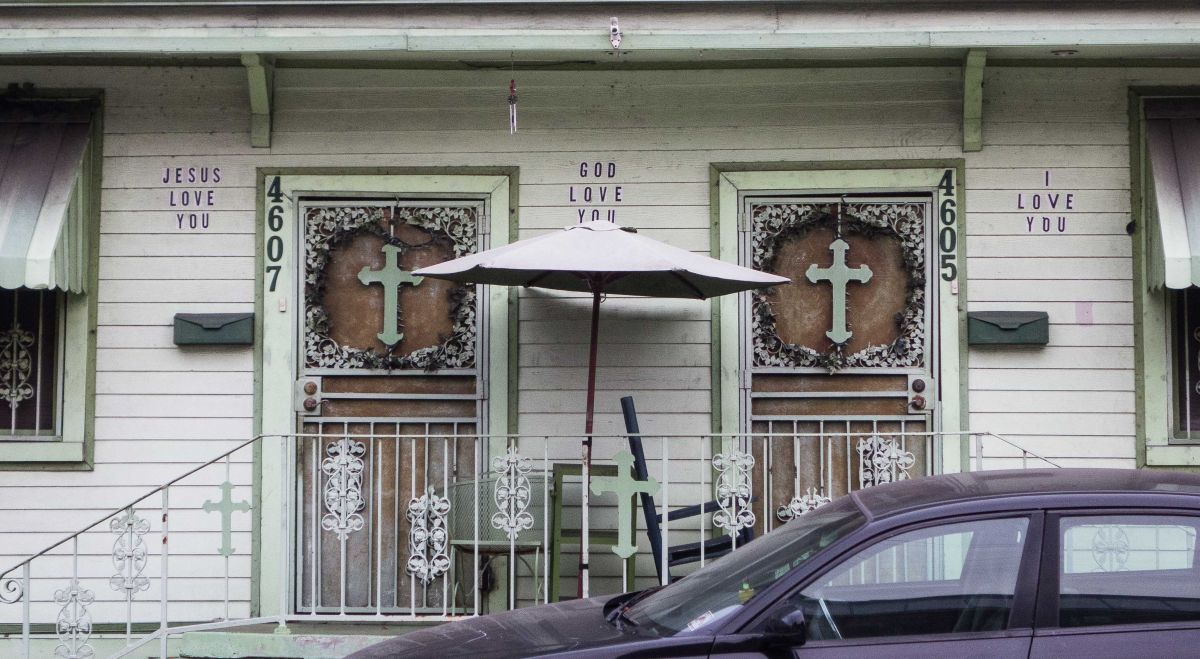 As a cyclist, let me start with the highways: huge scars that cut across the city, dividing and separating neighborhoods: 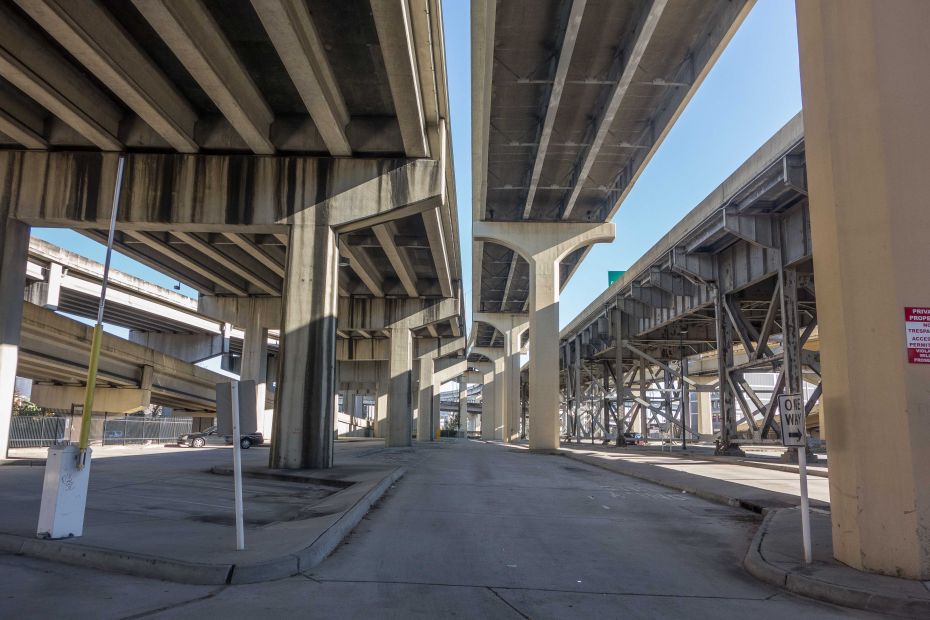 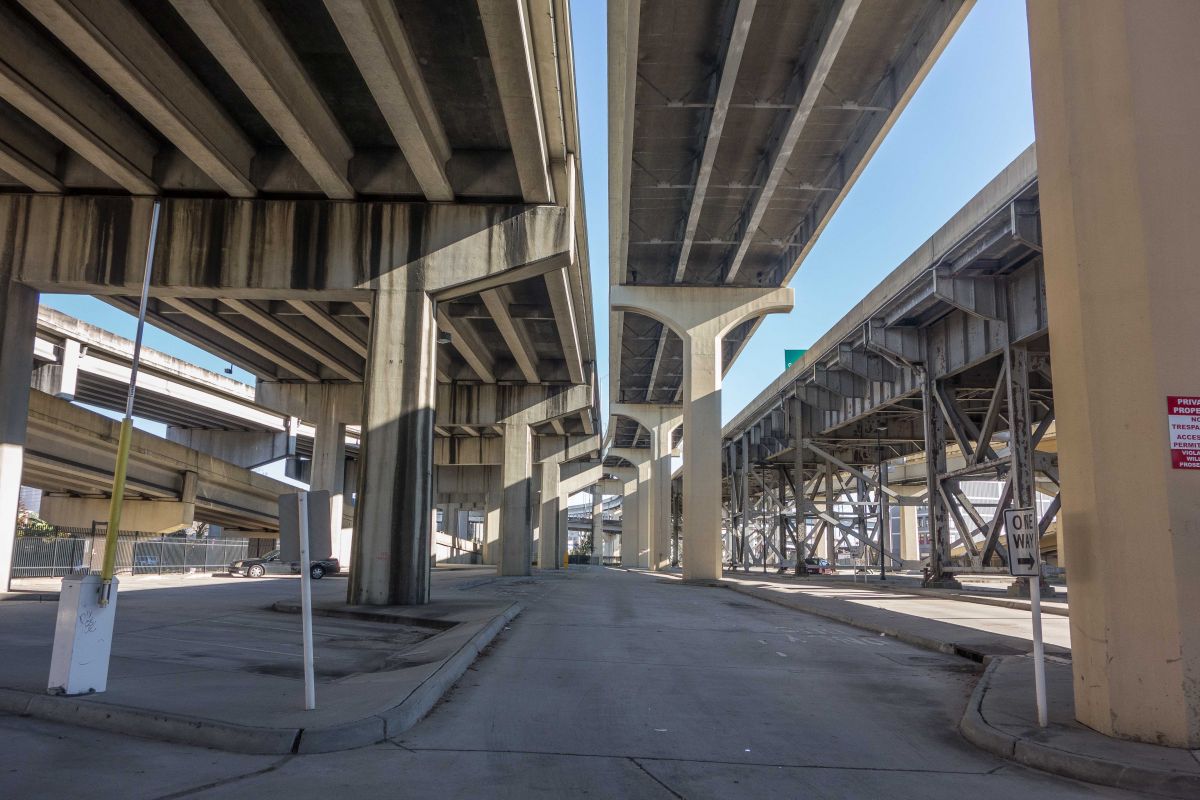 They’re beautiful and awe-inspiring, no doubt, but the effect they take on the social, economic and cultural life of this city has to have been devastating. Almost as much as the freeways through Overtown in Miami.

In New Orleans, as in many other cities, the freeways not only provide quick virtual access (virtual because they don’t actually touch the cities) to the city from outside, but are used by city residents to get from one part of the city to another (something that could be equally accomplished by a network of mass transit—lots of trolley lines that used to exist were eliminated here). The freeways here are mostly elevated. As they are above the flood waters, they became a weird refuge and prison for folks during Katrina. Being elevated, for the most part, they theoretically shouldn’t impede the network of surface streets as much as the typical ground level or sunken freeways do, as in NY and LA. But as I biked around, it seemed like that wasn’t really true. Many streets dead-ended around the freeway zones and one had to detour quite a ways to get across to another neighborhood. And, as can be seen in this picture, they create dead zones. No one except the homeless live under these things; no business goes on under them either. It’s a massive usurping of what must be, or could be, valuable urban real estate: 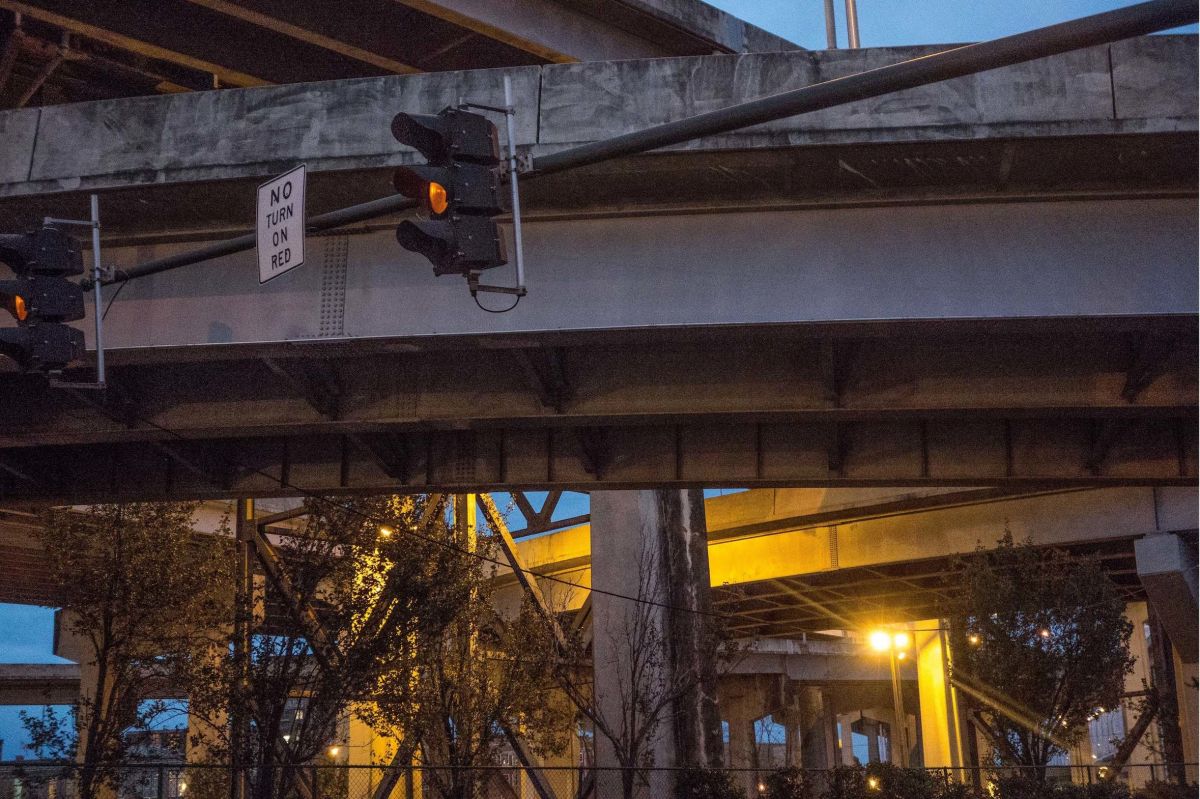 The freeways were only the most recent of many “cuts.” New Orleans has a network of rail lines dividing it too. Some run atop the levees along the river, going East and West, no more disruptive than the levees themselves. They allow the port to function, facilitating distribution of the goods coming into and out of this port. Other rail lines cross the city’s interior, and those divide neighborhoods the same way that the highways do—on the surface one always has to search for a way across.

Canals criss-cross the city as well. Pretty much all of the flooding happened due to the failure of the barriers between the large canals that were supposed to protect the surrounding communities (more on that later.) This one below runs parallel to some train tracks. It’s obvious that other than the bridge I’m standing on, there’s no way to get from one side to the other. The two neighborhoods on either side are completely severed. If you wanted to get hardware, groceries or hang at a bar on the other side, well, forget it. Maybe these small canals like the one below and the rail lines were deemed essential to the city’s economic health, I don’t know—I’m simply commenting on the knock-on effects they have. 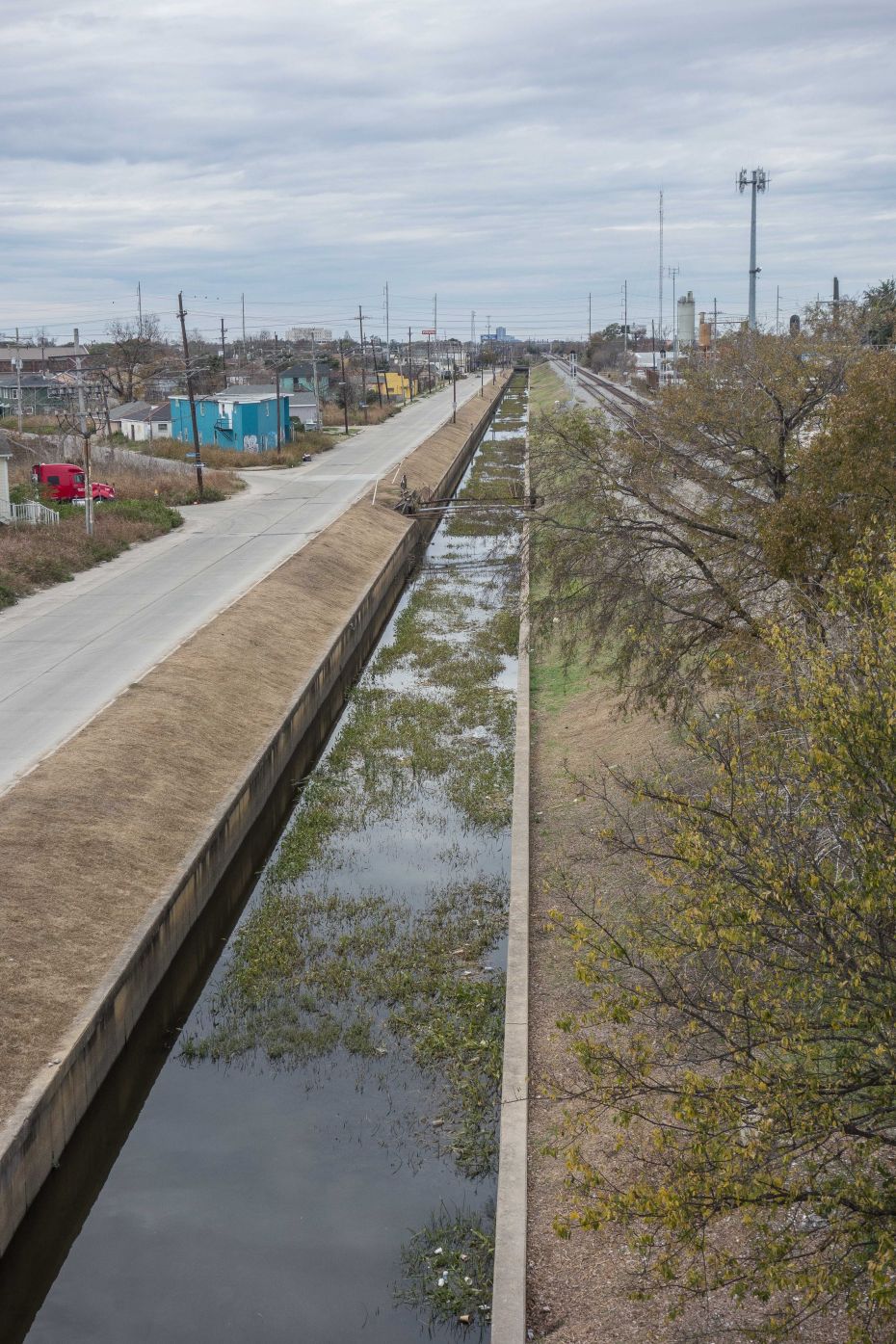 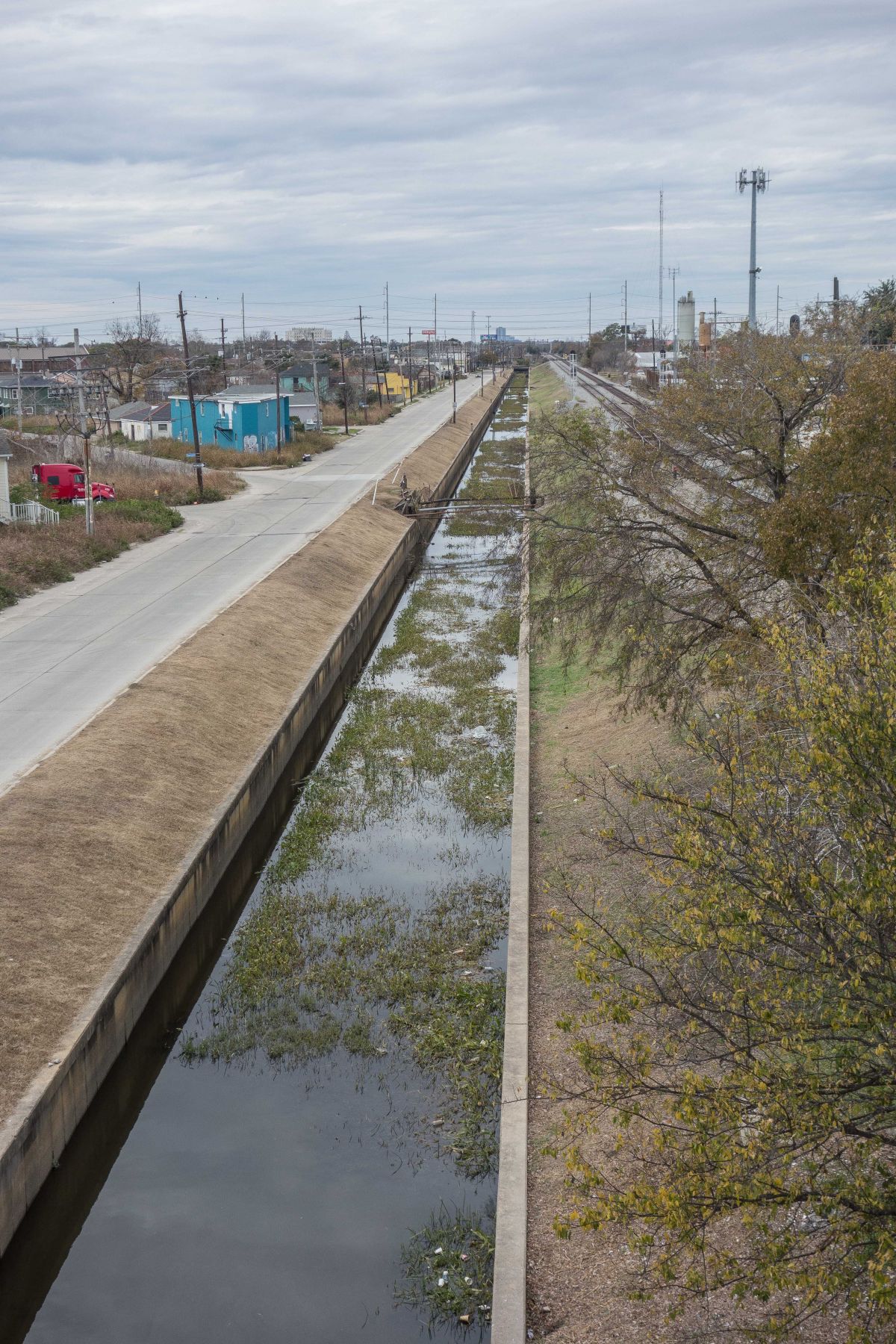 There is reconstruction going on all over. In a lot of the neighborhoods that were heavily flooded there are crews working on fixing up houses and painting them. Alongside these homes being renovated are plenty more that are boarded up or obviously vacant. The reconstruction is heartening, but seeing signs for house leveling is heartbreaking.

It was a sunny day today. We rode around the Holy Cross neighborhood and the Lower 9th on the other side of the Industrial Canal from where we’re staying in Bywater. Holy Cross, closer to the river, didn’t get hit severely. It’s an area of mish-mash housing styles—regular suburban-type homes and a few older ones still standing.There are two frilly “steamboat” houses that were built a century ago. They are tiled up to the second floor—inside and out—so even though the floodwaters reached about five feet high here in some areas here, these two houses sustained little damage. The ground floors could be more or less hosed out and they were ready to live in (except for the heating and water and such, but the structures were intact). 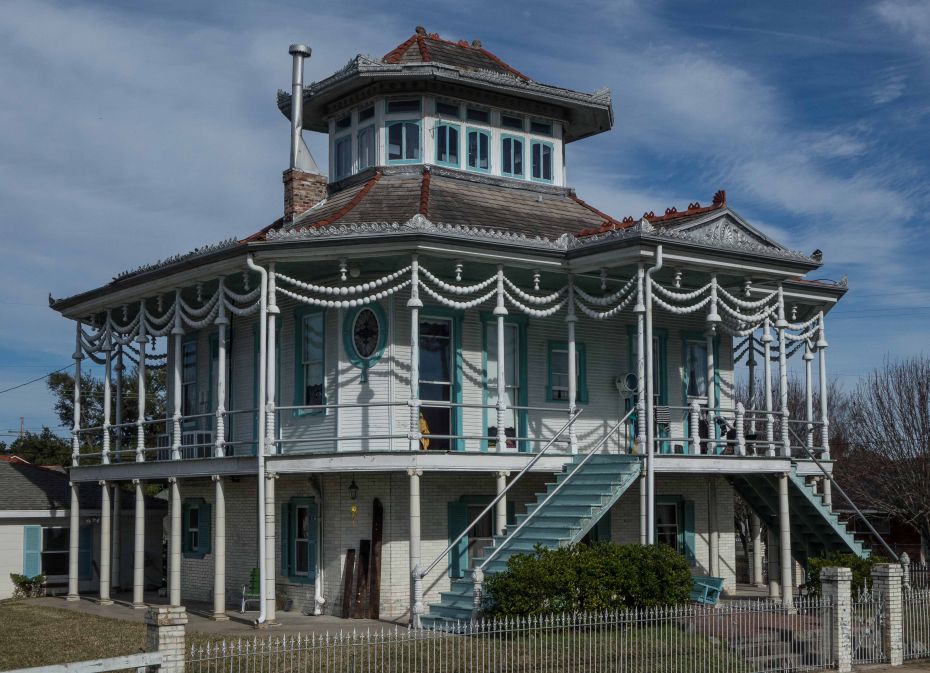 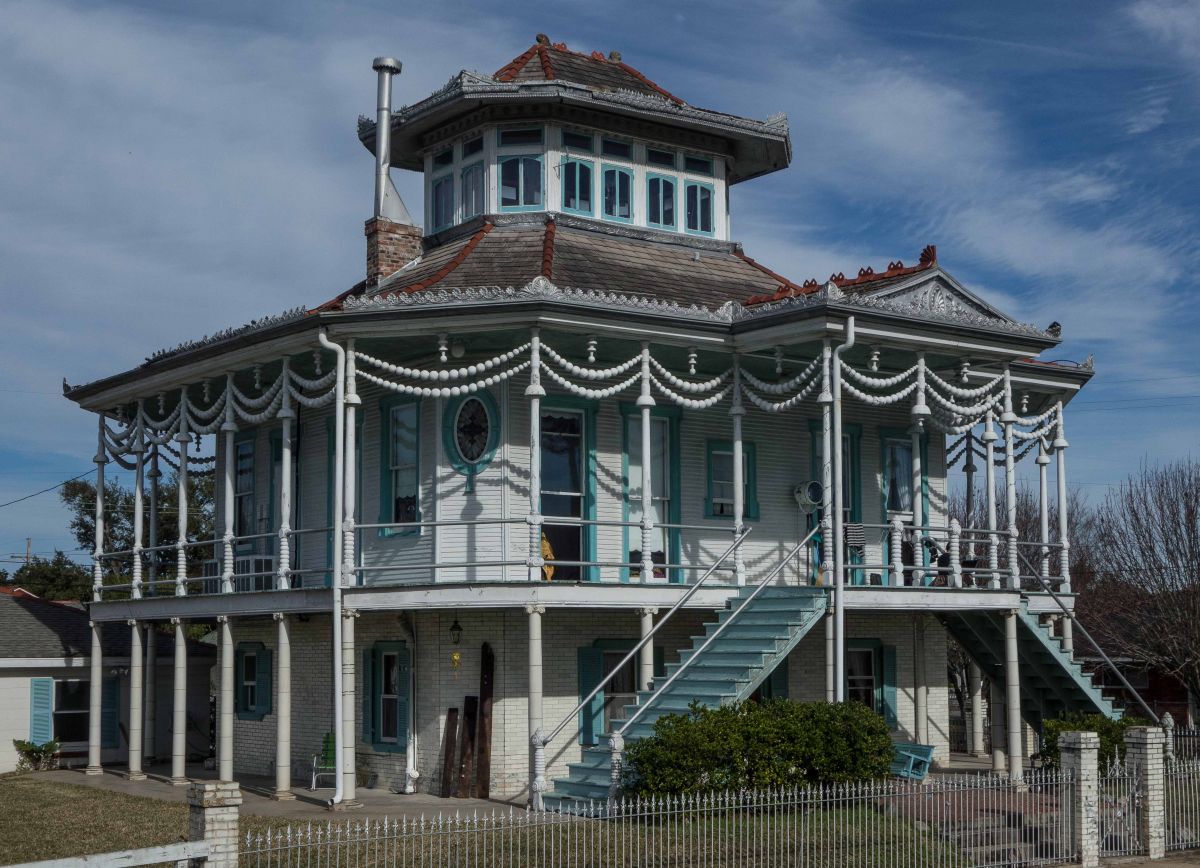 On the levee, we saw a man by the river handing a semi-automatic pistol to his son, who must have been around 8 years old. 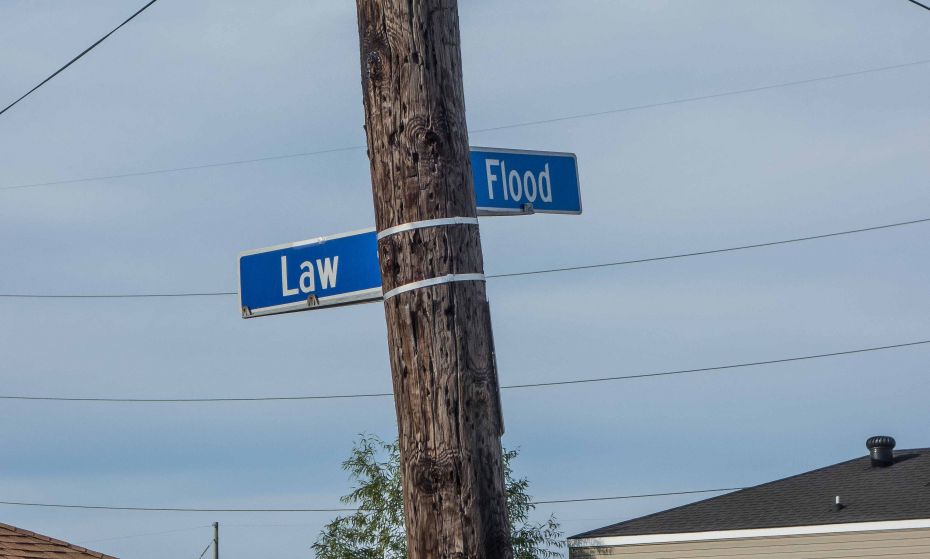 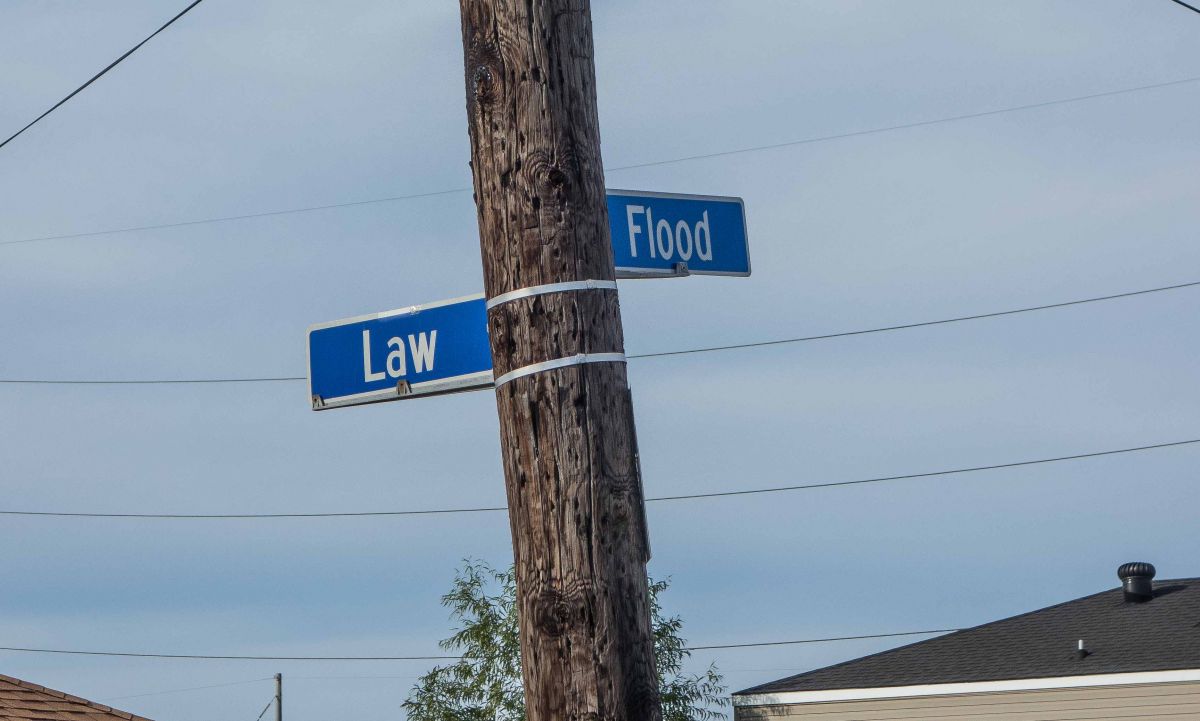 The lower 9th is another story—still. At least half the houses are gone, and weeds and reeds have grown up where there used to be houses, in the spaces between the homes that remain. It looks a bit like central Detroit. All of the landscape below was once houses: 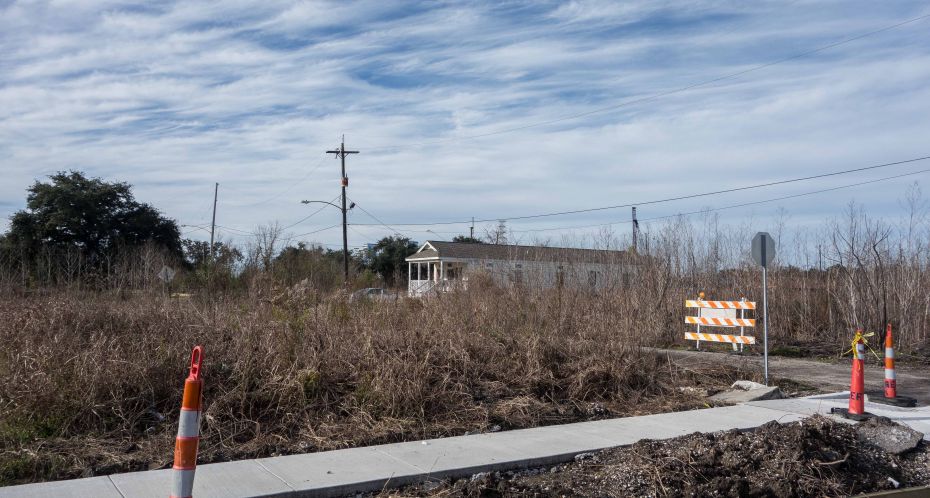 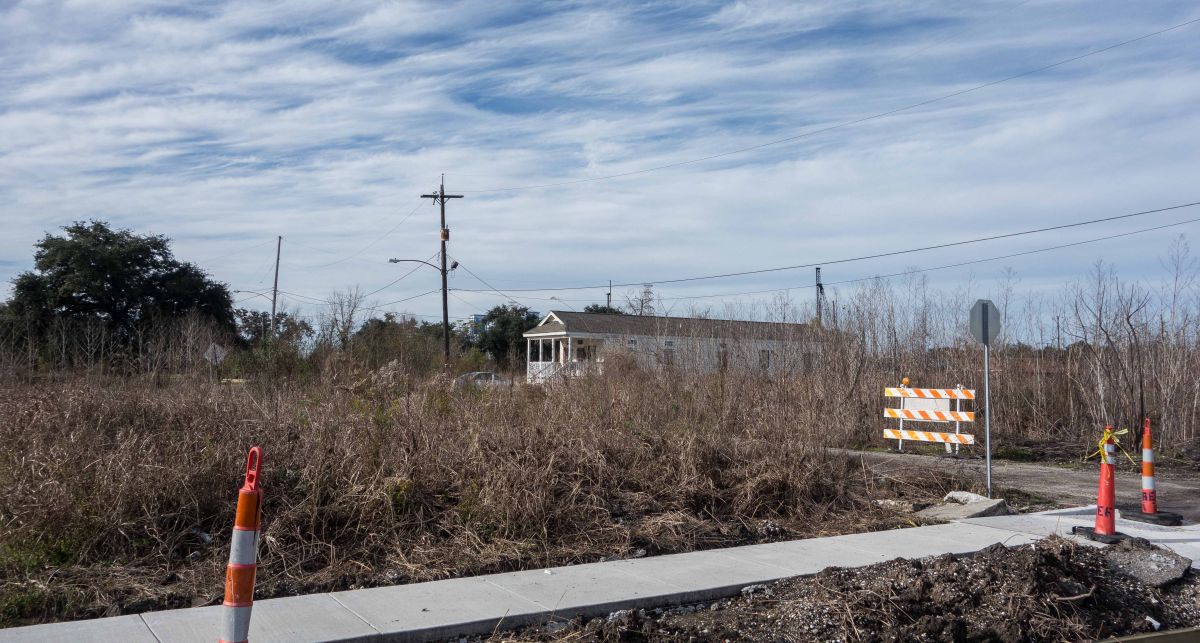 There are signs for lot-clearing services; it’s all a bit sad and surreal. Outsiders have famously initiated some new construction, such as the houses by Make It Right designed by a collection of well-known architects. 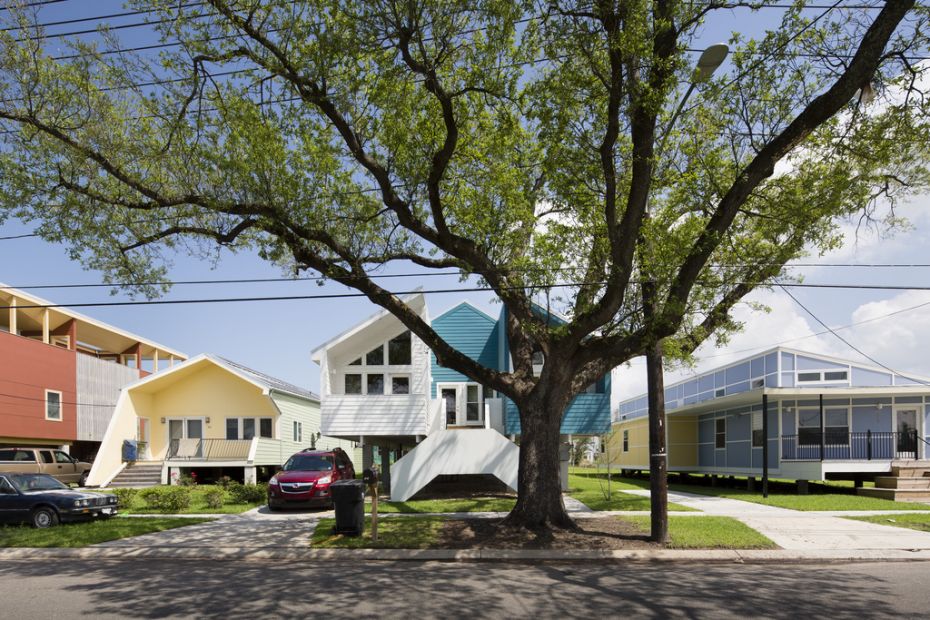 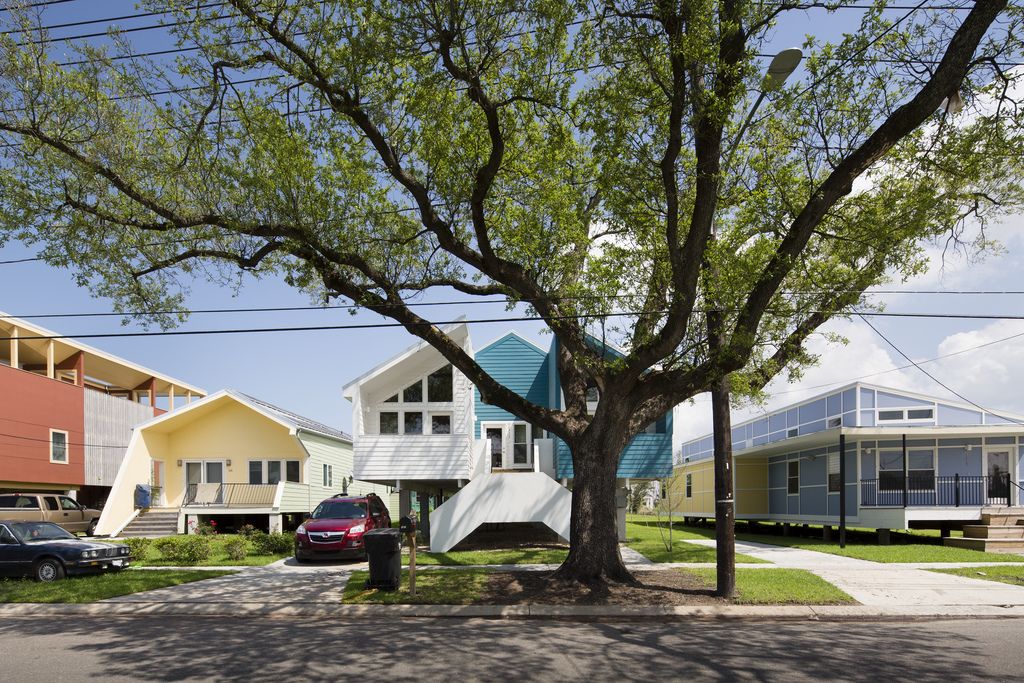 ...and these ones in Holy Cross, organized by Global Green, an org started by Gorbachev to encourage sustainable practices: 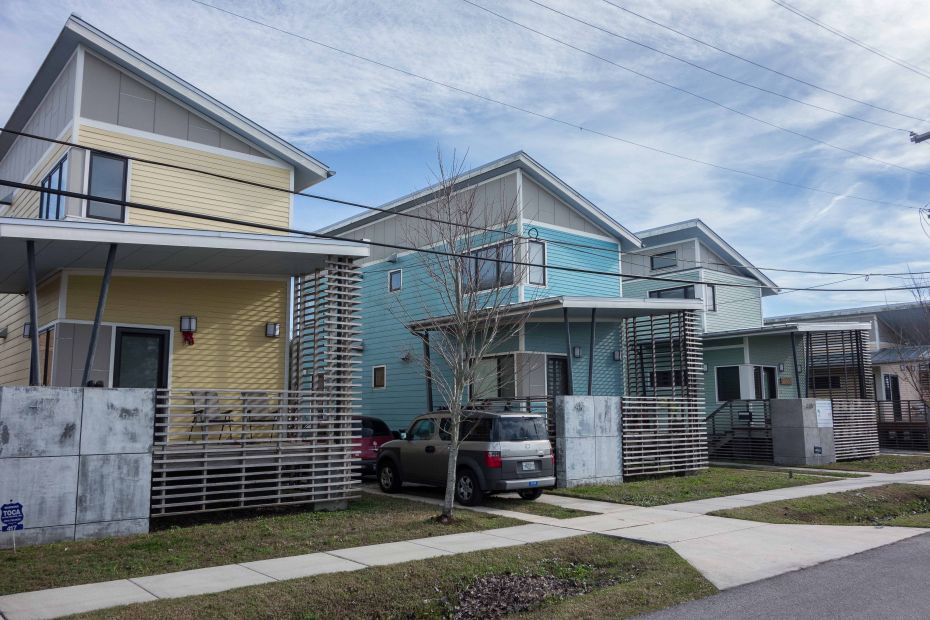 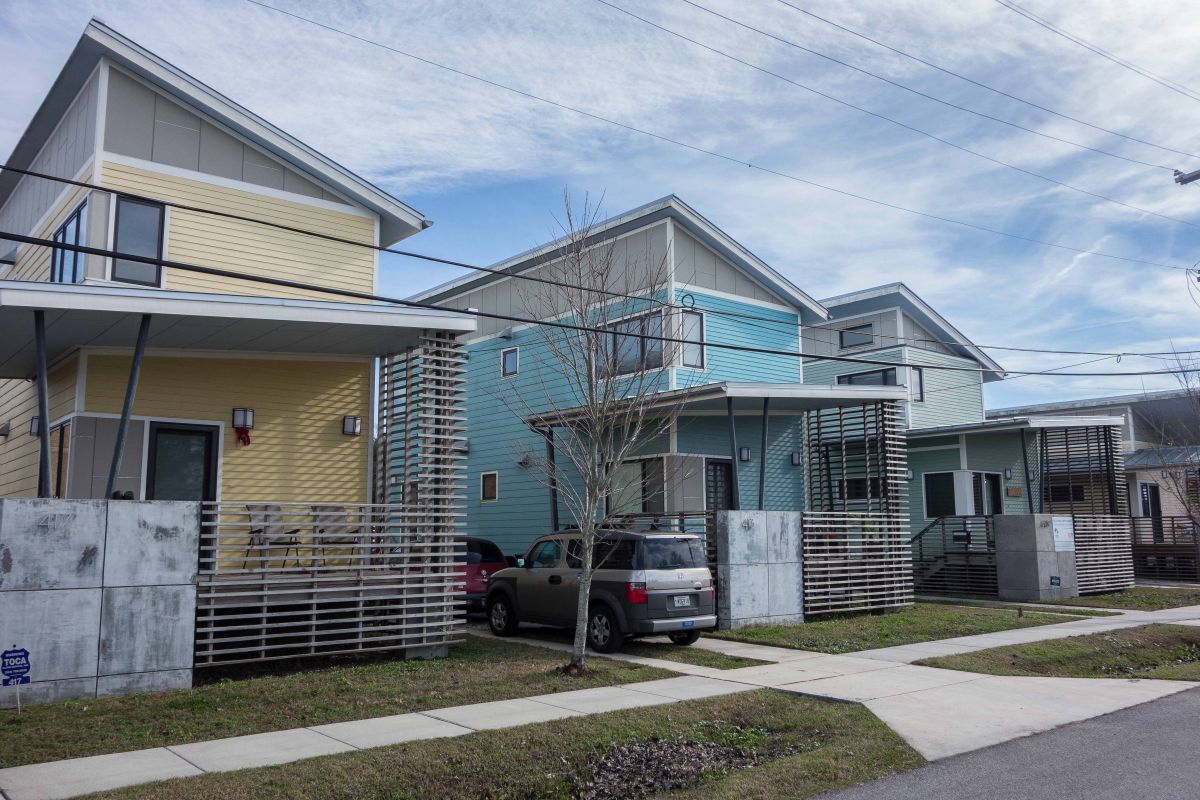 At the northern end of the 9th ward, we stumbled on an overlook that gave a view of a former cypress forest/swamp just north of the lower 9th. This is what an old growth cypress forest looks like: 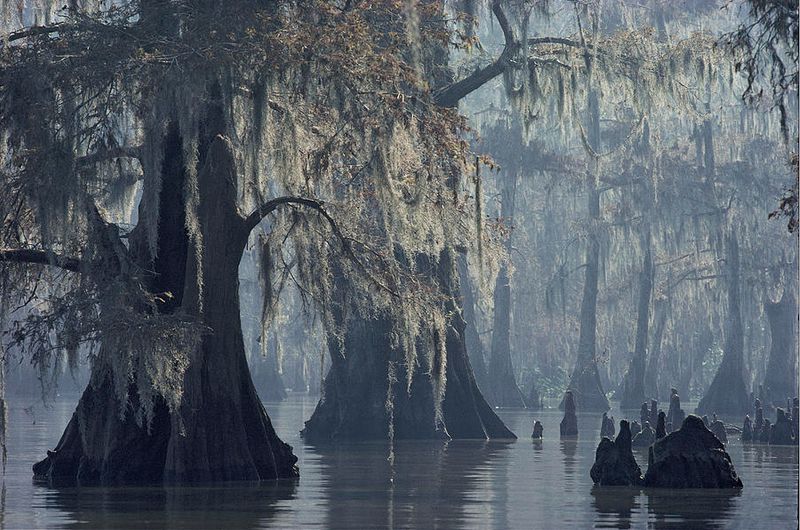 There used to be lots of these cypress forests in the Mississippi Delta, but with the introduction of canals for oil pipelines and shipping they’re mostly gone. Now this overlook looks out on a vast lake with a few stumps poking up:

It seems in the 60s, they opened a new canal for shipping that made a straight line from the Gulf to New Orleans. It’s called the Mississippi River Gulf Outlet (MR-GO), also known as the “hurricane highway”— due to this straight line, storm surges and Gulf waters aren’t slowed down by the meanders that the river takes between here and the Gulf. MR-GO allowed salt water from the Gulf into all the surrounding areas and killed all the existing vegetation...not just in that bit we viewed, but all around. This vegetation and the watery meanders all served as natural barriers for the surges that periodic storms brought. The consequences of eliminating those barriers are self-evident.

Here's an article that gives some background and explains what might be done to reverse this trend.

Robert Taylor, a 65-year-old black man in a gimme cap, who is the caretaker of the overlook mentioned in the above article, came up to us and explained the situation. I have to mention that for us outsiders, having a stranger come up and start talking is unusual—we might normally suspect he might be asking for something or have some ulterior motive. Here that isn’t always true—more often than not, folks just want to talk. And it’s worth listening. He's old enough to remember the cypress forest and to have seen it vanish. He points out that with the forests gone, the levees and barriers here take the full brunt of the surges, and they can't withstand them….nor will they ever possibly be able to. The Army Corps of Engineers, who built the obviously faulty flood protection system, managed to have a law passed (many decades ago after an earlier flood) that absolves them of any responsibility for future failures of the stuff they build. How that one got passed, I don’t know—but obviously it means their work can be half-assed and no one can be held accountable. Amazing.

It’s lovely the way folks here just spill out their stories that meander like the river. His brother, a guy missing all his front teeth, came up too, then he wandered off. Robert pointed at him, by the railroad track a ways off, and said he was looking for raccoons. They're good to eat, he says. Then the conversation turned to other edible local wildlife. Robert won’t eat possum—he has seen them coming out of a cow carcass they were eating—but there is a kind of wild pig nearby that is delicious he says. Interbred wild boar and domestic pigs, so, larger than a boar but just as crazy. He suggests that you go for the smaller ones (you can get them if you hide in a tree) and avoid the big ones, as they are too heavy to tote back.

The flood into communities and the damage was entirely man-made. For a quick recap, here is a wonderful interactive play by play of how the levees broke and which areas were flooded published by the Times-Picayune, the local paper.

It’s easy to see from this infographic that the Mississippi levee remained entirely intact—it was the man-made walls and barriers of the canals that gave way. Not that higher or stronger walls are going to solve the problem, or so it seems to me. The ground is often higher along the riverbank too. It appears that, as Taylor points out above, decades of mismanagement and poor decisions (at least poor for the poor and middle class in those neighborhoods; OK for the oil companies) made the disaster inevitable…something waiting to happen.

The city is coming back in a fashion—slightly more gentrified and whiter than it was before. Some folks were attracted here after the flood by the easygoing lifestyle and cheap (or even non-existent) rents. 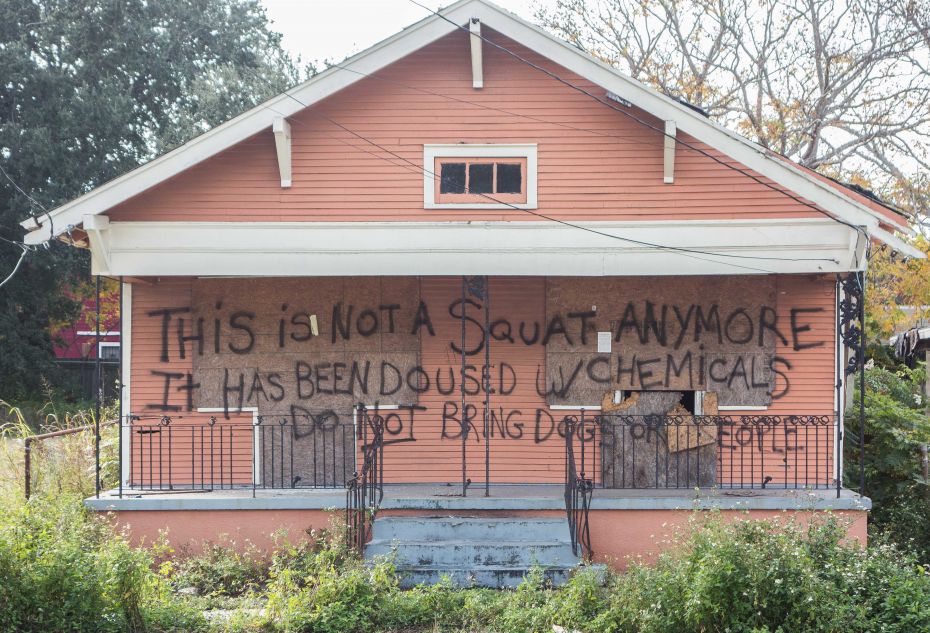 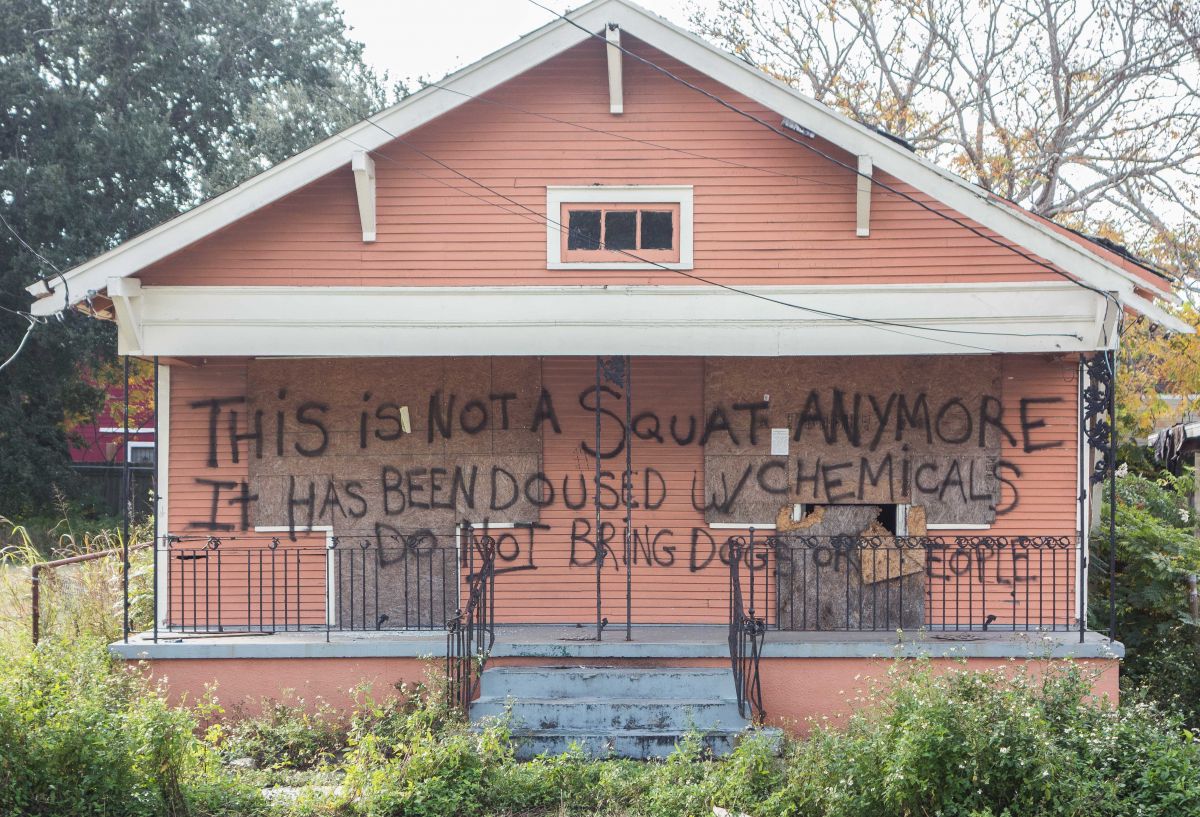 Though, coming from NYC, gentrification is relative; it’s not like there are massive glass-walled condos going up everywhere here like there are in Manhattan and Brooklyn. There are younger (mostly white) folks fixing up old houses that they can get for cheap and one sees slicker restaurants popping up and the inevitable yoga joints, but most neighborhoods are still way more integrated than elsewhere. 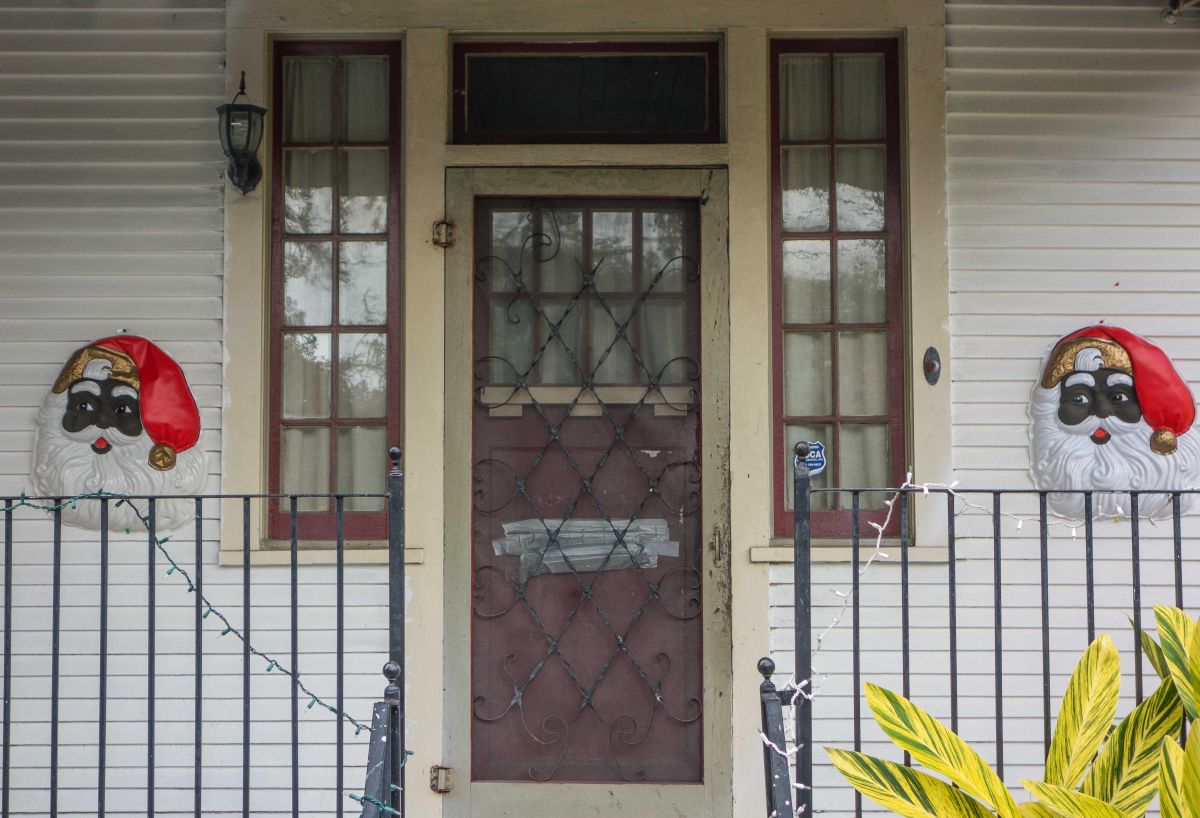