I went out to Corona Plaza in Queens this morning to be supportive of the neighborhood DOT’s neighborhood plaza partnership initiative that is expanding to the outer boroughs. There are a number of these pop-up plazas in Manhattan, the largest and maybe most contentious being Times Square. To some, returning Times Square to a public space for pedestrians simply makes it more of a mall than it already is; to others it provides a focus and a place that is common and available to all, not corporate or privately owned. It’s always packed with people—mostly tourists I think—who spend money at the surrounding stores. Businesses that might have complained about the lack of parking right in front of their shops have come to realize that a plaza attracts far more people than one or two parking spaces.

In less central locations these things are indisputably a good addition to our city. In barrios in Bogotá and Caracas, the introduction of these little plazas has had the knock-on effect of lowering crime in the surrounding neighborhoods, increasing revenue for local businesses and providing a democratic space for everyone. A sense of community identity and pride emerges. Tackling any of those issues piecemeal is both more expensive and less organic (and less likely to stick). Having a public space—a commons—is a way of accomplishing a lot with a little. There are nearly 60 of these in the works around NYC.

How do they work? The DOT pays for the infrastructure changes (the barriers, plants and seating) but waits for a neighborhood to request a plaza—they don’t just move in without being asked. But there’s a catch: to get a plaza there has to be guaranteed upkeep. Trash pick-up, plant maintenance and all that. Times Square businesses have ready cash and existing improvement associations that could easily manage and fund some of that maintenance. The bodegas and cafés in Corona aren’t quite as flush, so it took three years for the maintenance funding for this one to get sorted out. A bank contributed a lot, as did some other city-wide organizations. The DOT has helped organize a program in which much of the maintenance is done by homeless folks trying to get basic jobs or people in halfway programs trying to get their lives back together.

La Cumbiamba, a cumbia band, was playing; there were donuts and coffee (served out of a rice cooker!), a pop-up library and some speeches, of course. 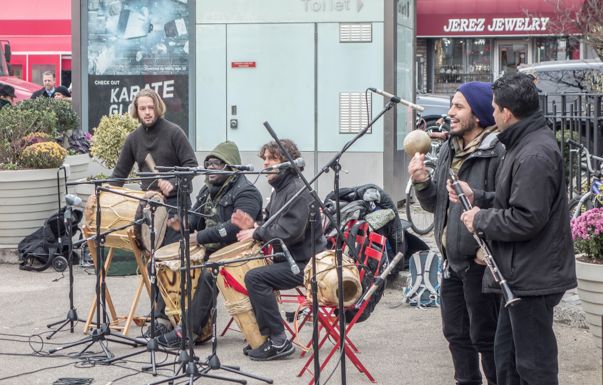 This is now primarily a Dominican and Columbian area (hence the cumbia band), with a smattering of other ethnicities sprinkled around (I passed some mom-and-pop Italian and Mexican restaurants as well). I was told that this area and Jackson Heights are the most diverse communities in the city, in the country…and maybe in the whole world! That’s quite a claim, but it might be true.

On a recommendation, I pedaled a few blocks to Tortilleria Nixtamal, which is said to be the best in the city. I had some pozole (hominy soup with chicken, lime, chopped radishes and seasonings) and nopale (cactus) tacos. Really good! 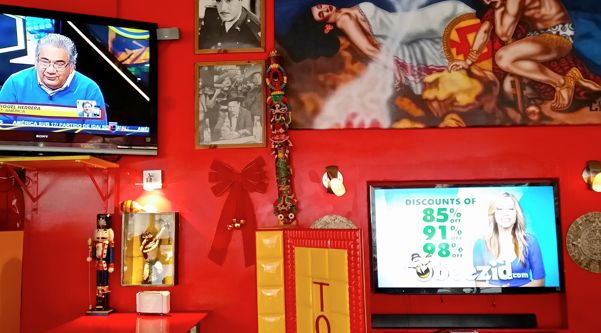 There were three flat screen TVs on, but with the sound off, thank God. One screen (the one above with the discount percentages and the hostess), is totally inside a booth, so if you and your friends sit there you’ll have your own giant screen. The painting on the upper right depicts the Legend of the Volcanoes, a sort of Romeo and Juliet story in which a woman, mistakenly believing that her young hero has died, kills herself. He returns, and distraught, takes her to the mountaintop in hopes that the snow will revive her. These lovers are the twin volcanoes that surround Mexico City, and the smoke—still coming from one volcano—is our hero’s campfire.

I had time before my Midtown Manhattan meeting, so I moved on to the Louis Armstrong House Museum, which is four blocks in the opposite direction of the 7 train station. Armstrong moved to Corona fairly early in his career and never left—a local celebrity. When he arrived, the area had just expanded (it was mostly pear orchards until the elevated subway went in) and was at that time primarily settled by German and other European immigrants. There is still a German church on one corner. Wave upon wave of immigrants came—after WWII it was largely Afro-American. Other jazz greats had joined Armstrong in the neighborhood: Dizzy Gillespie’s back windows can be seen from the Armstrong backyard (there’s a permanent bar set up in the backyard!) Now, as I wrote above, the area is mainly Latin, but inevitably this area will change again.

I entered through the gift shop and saw a small tour group leaving after having just viewed the introductory video. I stepped aside to let them pass, and there was Tony Bennett! Touring the Louis Armstrong house! Wait, he’s never been here before?

After they moved into the house proper I said to the guy at the gift store counter, “Wow, that was amazing” and to a young British couple who had also viewed the video, “Did you know who that was?”

As well as CDs and books, the gift shop also sells….laxative tea! (Read the label below!) 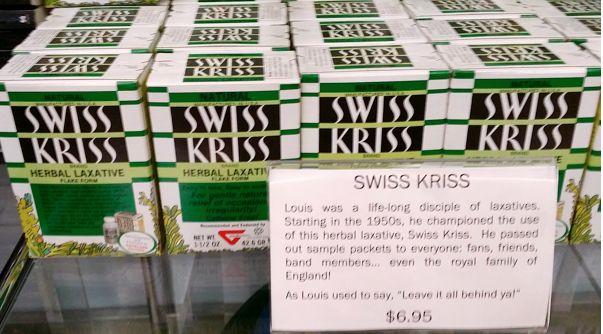 Armstrong used to record him and his wife around the house, and the recordings of mundane, raunchy and casual conversations get played back in their appropriate rooms. Here is the kitchen: 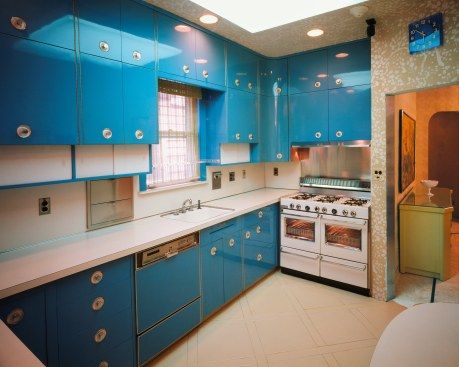 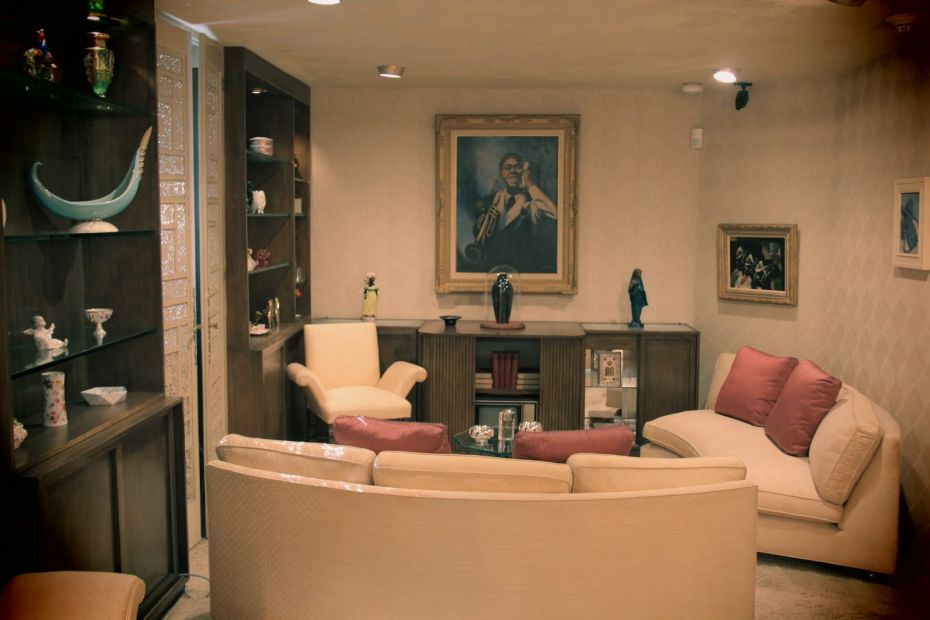 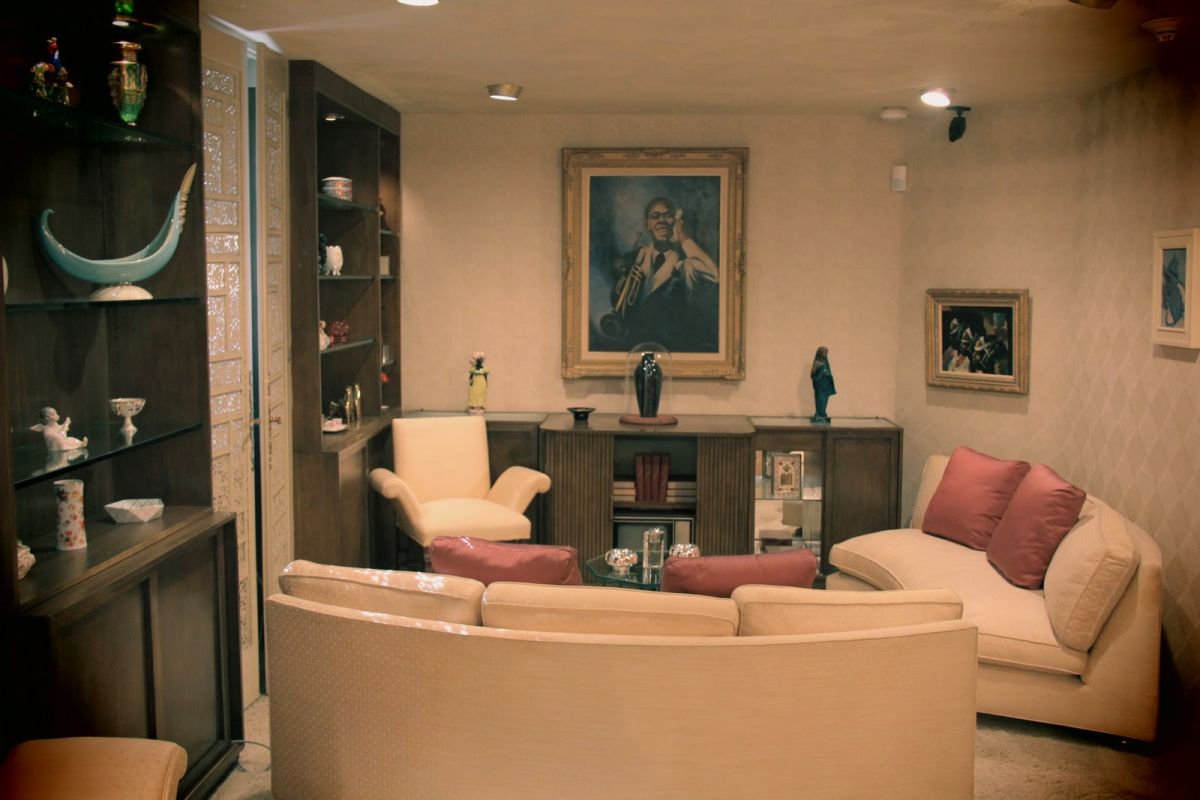