I realized that the type of maps we associate with our days at primary school and childhood was what I was imagining—not a realistic rendering of our planet or a map showing the physical world. This childhood world is all nation states, and all of them are in pastel colors with printed names (the pastel colors are practical, as they allow the type to be legible), a few rivers and some other features—the equator, maybe—but not much else. That's the world ball we (or some of us) grew up with. A wholly unrealistic world, a world of somewhat arbitrary political units—not a planet of clouds, deep blue oceans, beige deserts and swaths of green jungle. Anyway, the piece is maybe about this childhood image of our world squished under an overhead train line (in this case). The squishing of an oversize childhood thing is sort of fun, it's not overly metaphorical. It's a childhood thing that's grown way out of proportion and has been constrained. By what? The grown up world of train lines, apartment buildings and art galleries? 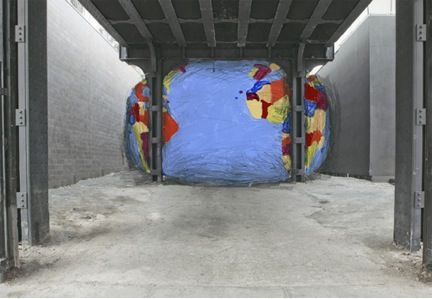 The low, slightly ominous sound coming from inside the globe was part of the earlier proposal as well. I sensed that given the dicey acsoutics of that space, and that it will be outdoors—with 10th Ave. noise and the West Side Hwy. nearby—clarity (which would necessitate high frequencies) might be an issue. So I went for the low frequency pulse, tremor and rumble. I knew in my head what I thought that sound should be—so rather than using instruments, synthesizers or samplers to make those sounds that I imagined, I simply made them with my voice. It was the easiest and fastest way of creating what I was hearing. I filtered and processed my voice so you wouldn't know it was a voice (I hope), and with the right speakers and amplification it will draw passers-by to look at this thing, even if they don't see it at first. They will, I hope, be drawn to check out what's making the weird sound in there, but it shouldn't be loud enough to totally freak out couples and other folks stolling on the High Line above—though they might be drawn to look over the edge or check it out when they are once again earthbound.

It's a wonderful challenge to come up with someting that might work in a crazy space like this—that will be temporary, easily installed and removed. I like being given restrictions like this to work with. I'm glad I was asked. I would have never thought of doing it otherwise.