Sometimes an ad—usually on the street—stops me in my tracks. This is what they’re supposed to do. Congratulations. Sometimes the message is clear, if a little bold and surprising. Here is one that was up near the Holland tunnel entrance a while back. Sydney is an adult film “actress” and Anthony Weiner’s sexting partner, in case some of you forgot. She aims to unashamedly capitalize on her 15 minutes. 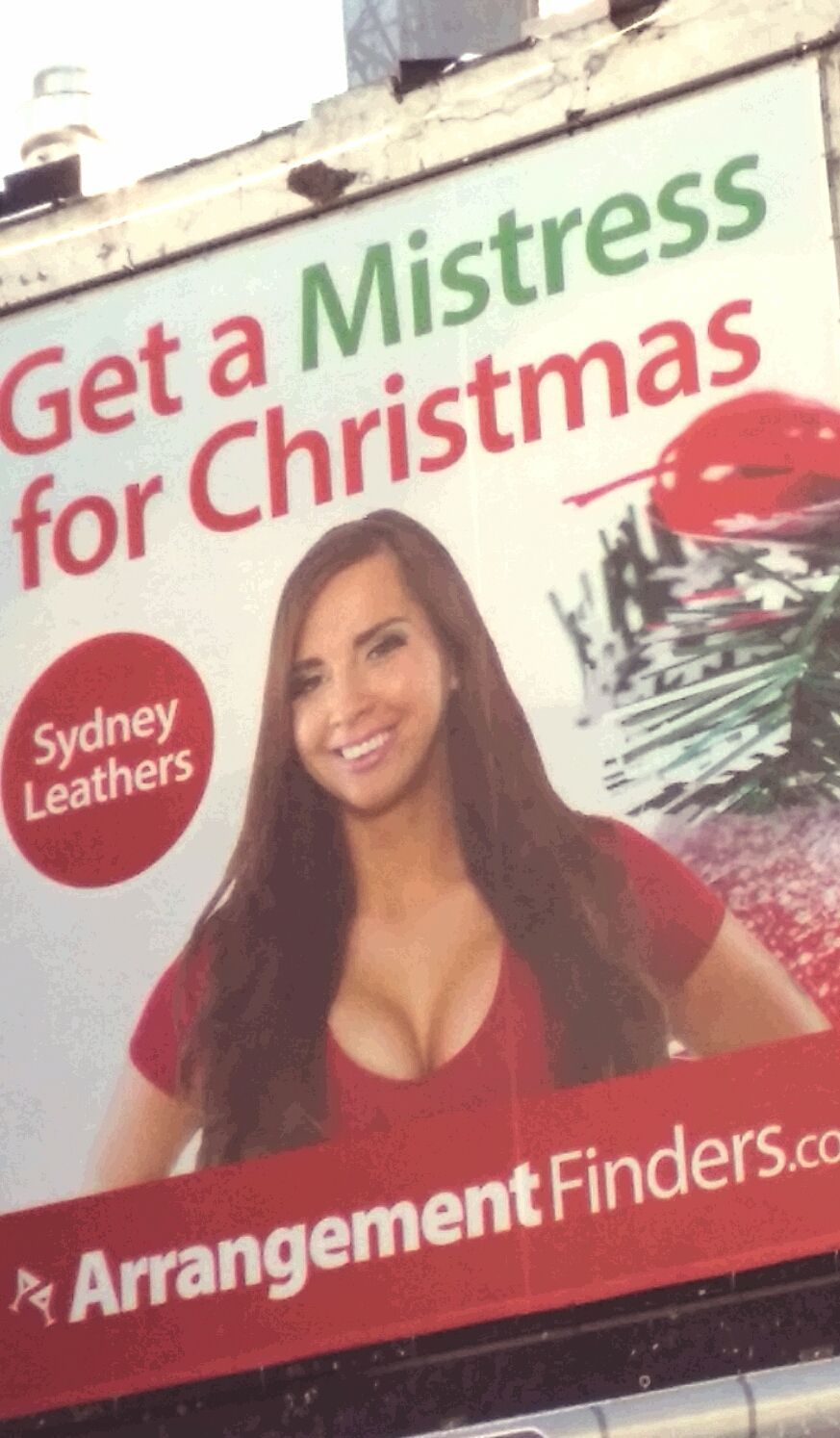 Sydney’s ad seems to be saying that cheating on your wife or partner, as Mr. Weiner virtually did, feels good and is totally natural and that cheating on your partner over the holidays is a good present to give yourself. I wonder how many folks headed to New Jersey, stuck in horrible tunnel traffic, jotted down Sydney’s URL as they headed into the, ummm, tunnel.

Here’s an ad for something called a core switch (this was an online ad in a news magazine, NOT from a computer or techie publication!) This stock photo of a ballerina’s maimed and bandaged toes grabbed my attention. Congratulations to the agency. Even in this day of unshockable, I was kind of stunned. FYI: Huawei is a giant Chinese tech company—they make all sorts of IT stuff, including phones. The ad helps us connect with the hard work, painful masochism and yes, joy that comes with an adaptable core switch. It’s one thing to use sex to sell products that have nothing to do with sex and won’t make you any more desirable, but to use pain as a selling tool! Bold move. I know, the bloody, bent and broken toes represent the sweat and tears that went into performing ballet—and there’s an implicit sense of accomplishment having reached the ballet finish line. But what has that got to do with adaptable core switches? This logical leap is poetry. I can only expect to see more ads featuring folks who have suffered greatly for their art or principles. You know, demonstrators from Ferguson with bloody heads, Mandela, Victor Jara with his hands chopped off, artists and writers in jails all over the world. Like adaptable core switches. 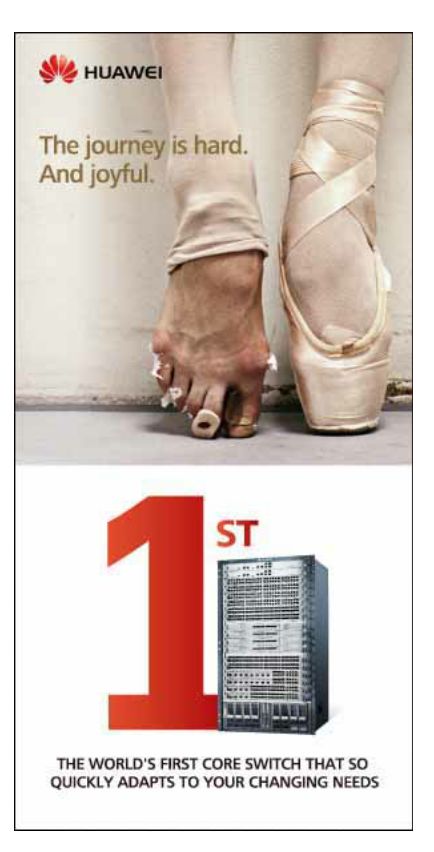 It seems Huawei is in the news today! They've been blocked from selling their products in the US, so the Chinese are not feeling too kindly to complaints about security in China and open back doors from US tech companies. The NSA previously broke into Huawei systems so China claims they should be allowed to do the same to US tech companies, on their soil. Tit for tat.

The United States has made it virtually impossible for Huawei, a major Chinese maker of computer servers and cellphones, to sell its products in the United States, arguing that its equipment could have “back doors” for the Chinese government. The documents released by Edward J. Snowden, the former National Security Agency contractor, revealed a major effort by the agency to enter Huawei’s systems, both to figure out who controls the company and to create back doors that the United States could exploit.

Many of us remember the Axe male perfume ads that implied that women—gorgeous women—would be irresistibly drawn to the wearer in massive quantities. I assume they were meant to be funny as they were so over the top.

It’s true that we do communicate by smell, more than we think. We give off odors that connect to receptors in the opposite sex that tells both parties what the other is feeling. I sort of doubt that there’s a universal male or female pheromone that one can simply dab on to lure potential mates, but I have heard such a thing exists for insects. A bug can be drawn to a semi-abstract rendering of a potential mate daubed with the appropriate elixir. So, theoretically something like the axe effect might be possible…though I suspect for humans it’s unlikely. 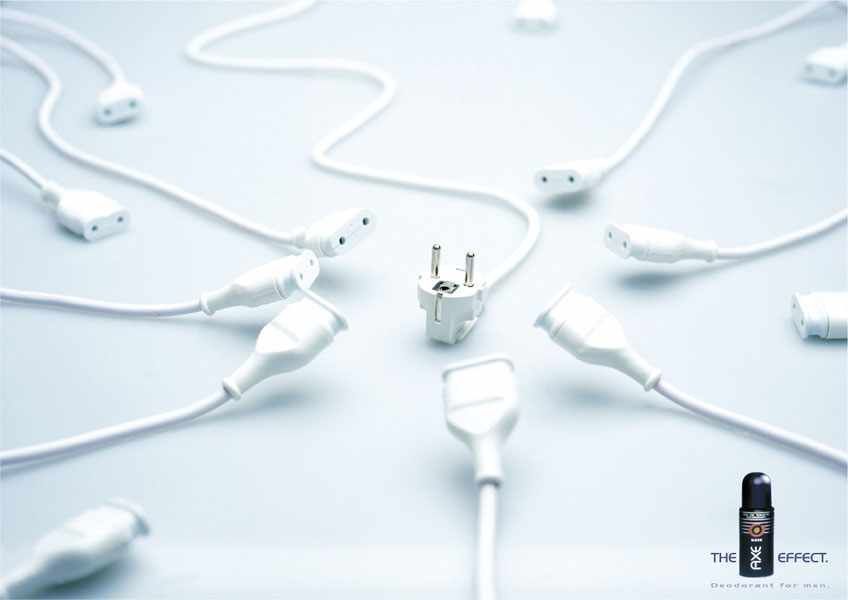 Here’s another Axe ad from Brasil, where the West African Yoruba word “axe” pops up in songs and Afro-religions. There’s even a whole genre of Afro-Brazilian pop music from Bahia called axé. In Yoruba, “axe” means a kind of positive life force that permeates everything. (The Portuguese copy in the ad says “the Axe effect”.)

Here are a couple of favorites from a recent campaign for Equinox gyms. (Equinox has another campaign that resembles the Axe ads—implying going to the gym will cause sultry models to disrobe at a moment’s notice in odd places as well as increasing men’s staying power.) The campaign below, however, seems to be saying that bad, antisocial, typically-male behavior is not only cool, but that it’s to be encouraged and any blame for getting into fights or stealing someone’s lawn ornament can be attributed to workouts at the gym. If that’s the case, the police and other authorities should maybe do some profiling of gym rats, as according to these ads they are more prone to unruly, unlawful and stupid behavior than the rest of us. 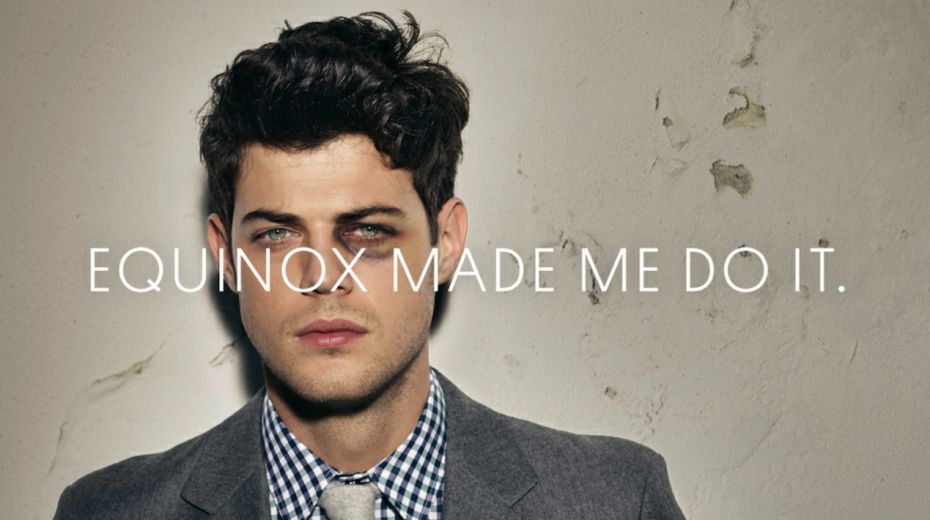 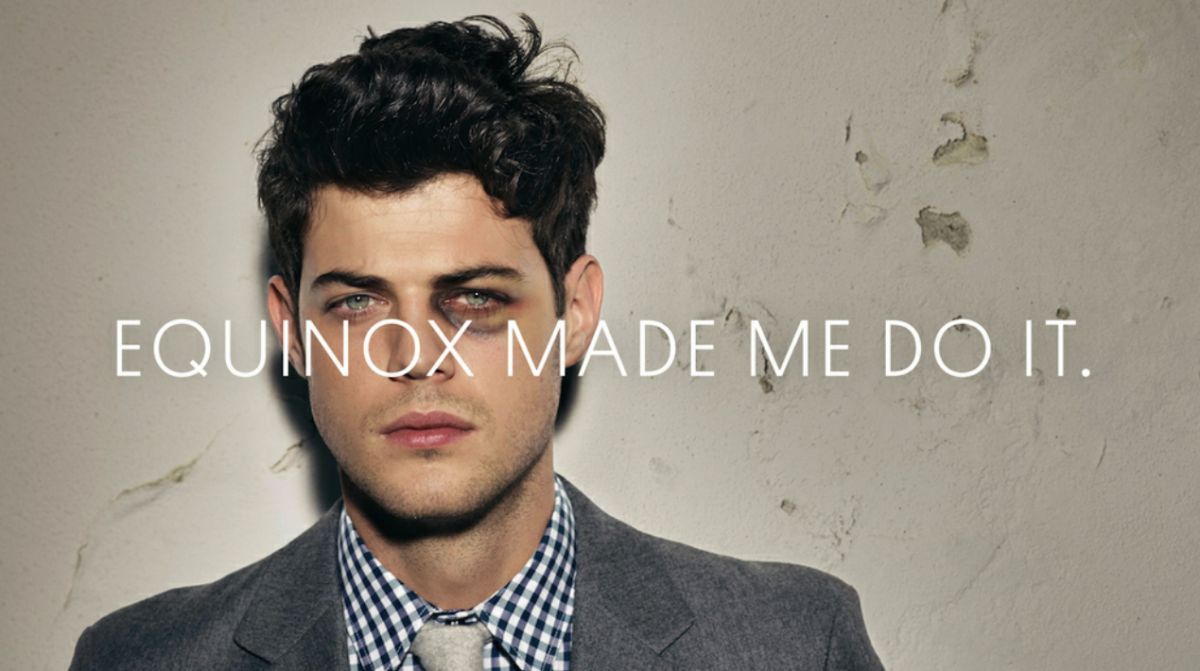 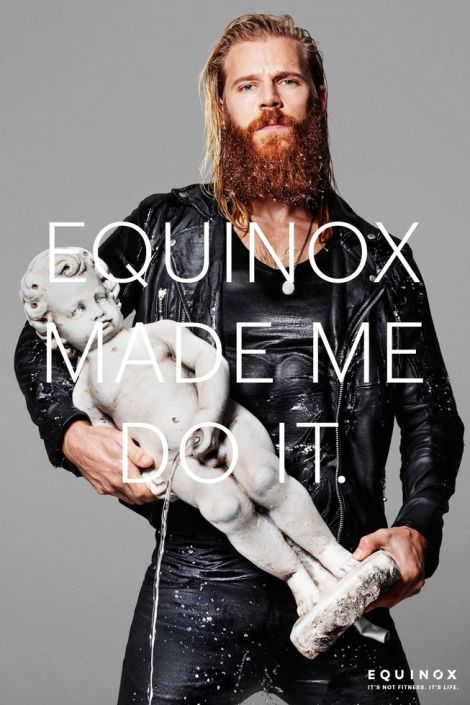 Like the Equinox ads, another Axe campaign also seems to traffic in the idea that bad, anarchic, dangerous, irresponsible male or female behavior—in this case blowing one another up by “accidentally” igniting a bag full of fireworks—is cool and excusable because, well, boys will be boys and, yes, girls also want to let their inner chaos loose…and a roll-on perfume (easier than a gym workout!) will encourage and excuse this behavior. 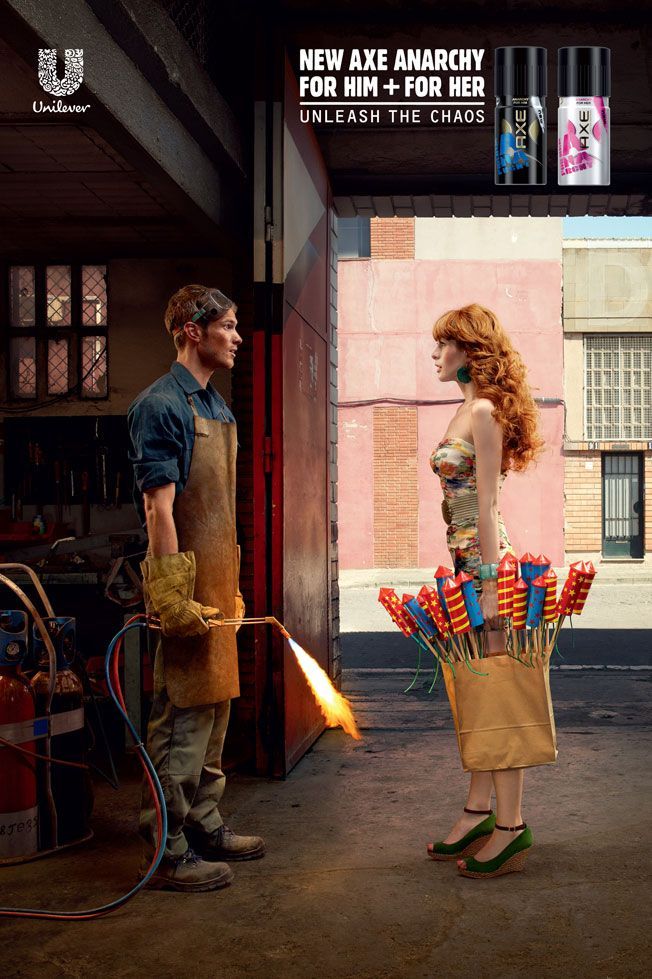