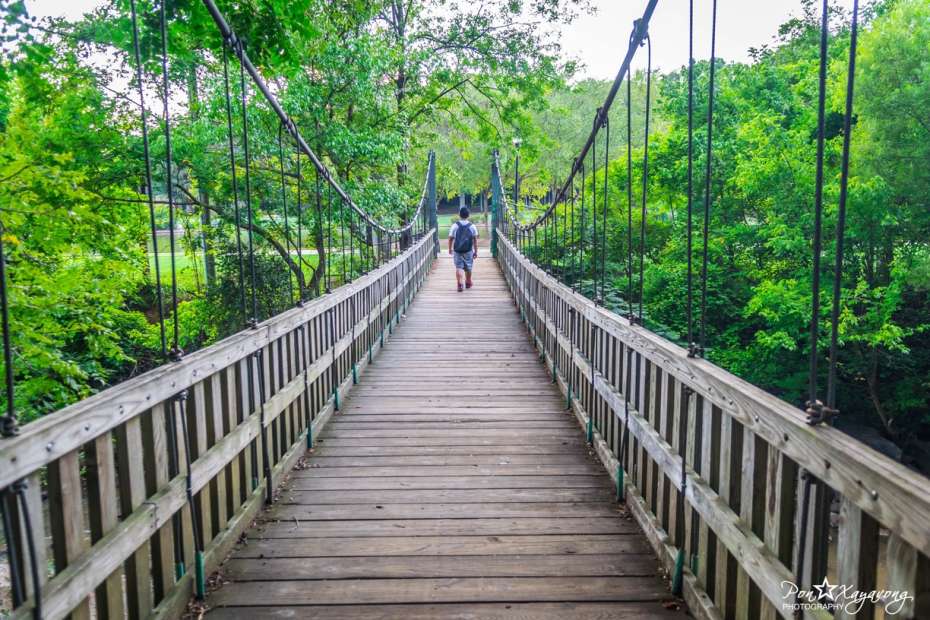 I went to Charlotte, North Carolina to do some get-out-the-vote work for a couple of days. Granted a couple of days might not seem like much, but elections turn on small results sometimes. In 2012, Obama lost some areas here that he had previously won by 17 votes! So getting at least 17+ folks to the polls can indeed make a difference and not just here in North Carolina.

North Carolina is a battleground state. The races for president, governor, senate, and judgeships could go either way. That’s why Hillary and The Donald were just here (on the day I arrived), Michelle Obama came the next day, and Barack Obama the following day. Bill Clinton visited, too. However, I didn’t see any of them. Folks here KNOW how critical their vote is, but still, turnout is an issue.

I didn’t want to campaign for a candidate, but rather do nonpartisan get-out-the-vote stuff for a number of reasons:

I wanted to focus on what is called casework. Casework focuses on approaching people as individuals, not as demographic clumps and numbers. This translates to one on one interactions instead of speeches and concerts. Nothing wrong with speeches and concerts—but I think for people to change their minds and commit to voting they often do it as individuals. I wrote to some voter organizations a few months ago and asked them, “Which state is the most critical, where would I be of the most use, and what local organizations can you put me in touch with?” I ended up working with three different organizations in North Carolina.

Friday morning, I met NextGen Climate folks who were doing a CTV (Commit to Vote) drive at University of North Carolina at Charlotte. This way of getting people to vote has a proven high rate of success.

Here is how it works:

With clipboards in hand we accosted mostly students, along with some professors and employees of UNC. Quite a few had already voted (there’s an early vote place on campus), but a very high percentage of those who hadn’t voted yet we're happy to fill out our forms.

I was pretty relentless and I got my spiel down pretty quickly:

“Our effort is nonpartisan. We’re not accosting you about a candidate. The wait in the voting line is one hour, but it is shorter if you go first thing Saturday morning. You don’t need ID if you’re already registered. You can register and vote right there! For that you need some kind of ID. A letter addressed to your home is fine. You don’t need to live on campus to vote at the campus poll or any of the early polls.”

Folks had a lot of questions, but I was having fun.

In many ways North Carolina is much better regarding voting accessibility than New York City. The early voting is a good thing as is the register and vote on the same day. We, New Yorkers, don’t have either of those, and I wish we did.

The recent ID laws still exist in many states, but no longer in North Carolina. These laws serve as an example of the many attempts to disenfranchise a whole swath of voters. One person explained, “If you can’t get their vote, then make sure they can’t vote.”

Funding for polling places is one aspect of voting in North Carolina that leaves room for improvement. Cutbacks in funding result in fewer polling places. Another consequence, early vote lines were often more than 1 hour and often times much longer. I was told that on Election Day the line could be over two hours. This wait disenfranchises folks who can’t get off work, need babysitters, have kids to watch or have a hard time giving up two hours, of their day even if they are willing. These long lines serve as another insidious way of weeding out who gets their voice heard.

African Americans as well as other minorities have been targeted in those let’s-make-it-as-hard-as-possible-for-folks-to-vote campaigns over the decades.

Redistricting is a widespread problem throughout the United States and elected officials need time to undo the damage this has caused. The chart below shows how some creative district drawing can disenfranchise what would be the majority of voters in an area. There’s lots of this crazy shit in North Carolina, and anyone can see how a majority could lose a state. 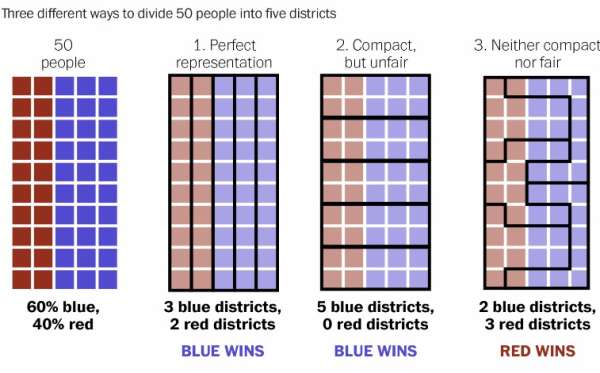 As in the chart above, you have an area that you have to divide into 5 voting districts (I don’t know why these aren’t counties). Ideally, you want all of the views of these people, the reds and blues in this graph, to be represented and have a voice in their government.

The first version shows how this can be done so that all are represented. The reds win where they predominate and the blues where they do—all good. But the political parties have found creative ways to re-draw these lines so that the results are not representative.

In version two, which appears to be simple, the blues win ALL and the reds have no voice at all. The blues do indeed predominate in the larger picture of 50, but we’re obliged to create districts. The reds end up with no representation. This is less than ideal.

Version three demonstrates REALLY devious behavior—what has happened in lots of states including North Carolina. Red, who are the minority among the whole 50, somehow, with this very complicated squiggly districting, end up the ONLY ones who have a voice. Representative democracy has been turned on its head. Not only is one group not given a voice, but they’ve been sneakily silenced by a minority.

Here are some examples of these crazy districts in North Carolina: 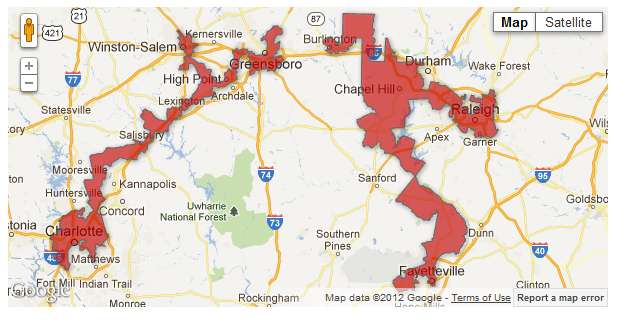 I went back to the hotel and went for a ride on Little Sugar Creek Greenway before dinner. 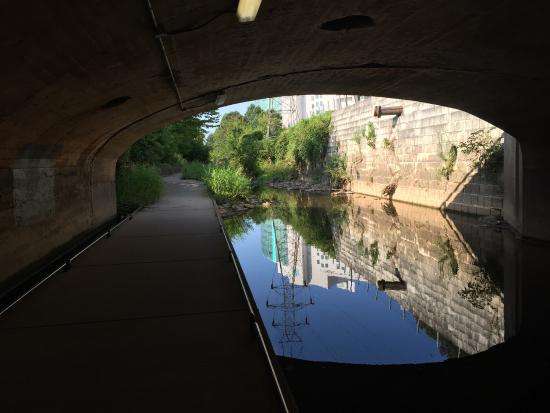 It has a really nice path for the most part. I wish it were longer and connected folks all over town. What a nice commute that would be!

Saturday morning, there was a bike ride rally to various polling spots that were open until 1:00 PM for early voting. North Carolina Voter Information Project helped organize this one. We met at Common Market. I had a breakfast sandwich and there was a proclamation from the Mayor (below). “Election Cycle Rally With David Byrne Day” (what a mouthful) commenced. I talked, a woman sang the star spangled banner, and we were off. 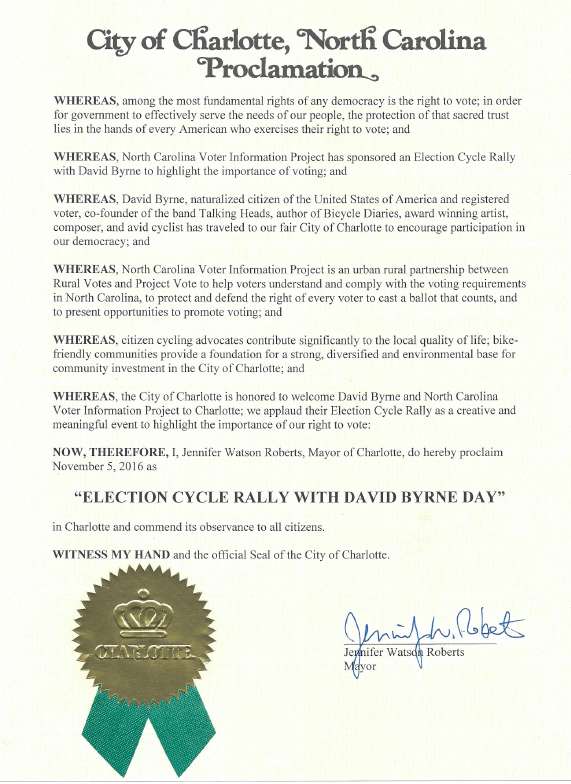 A lot of the riders stopped and voted at the various polling sites we stopped at. However, the bike rally was mostly about raising awareness (there were television crews), keeping people’s spirits up, and having fun not about CTV. People talked amongst themselves and to strangers as they cycled. There was a fair amount of colorful sporty attire and bike talk.

Look at the picture! The cyclist stragglers extend back down the street as far as the eye can see! 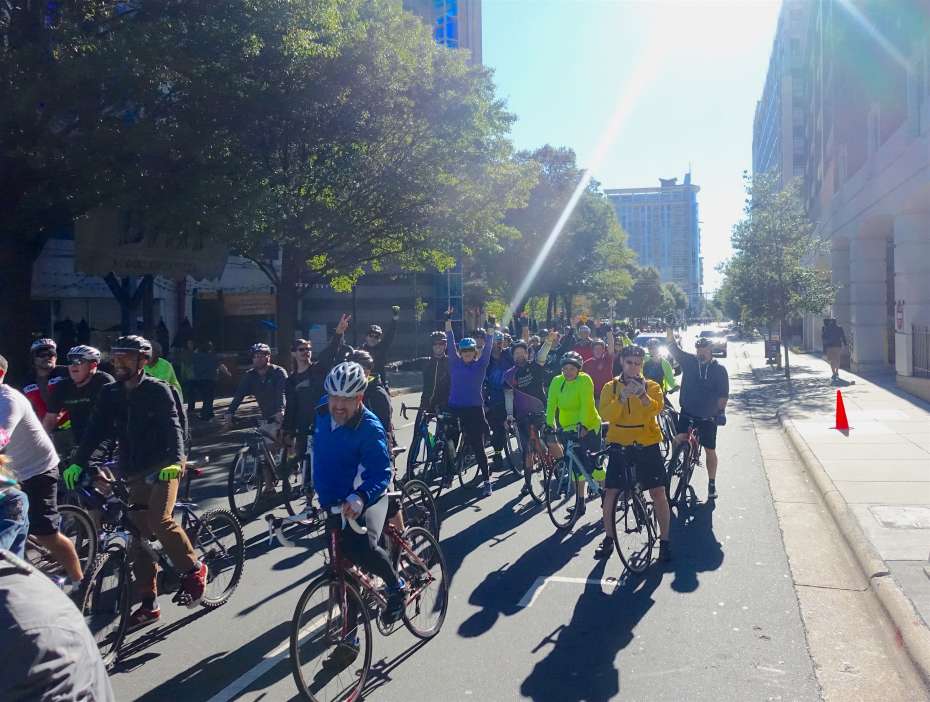 Then, I went off to another area to talk to some voters courtesy of an organization called Advance Carolina. I made it clear to the folks who were helping me that I wasn’t going to do anything partisan. They said, "Fine, we’ll do that. You can talk about the Sensational Six that Advance Carolina endorses."

Advance Carolina is a nonpartisan organization that advocates for greater representation of the African American community. This organization is nonpartisan like one that looks out for Italian Americans or Jewish Americans or any other group. It’s about representing an ethnic group, not a political party or a specific political agenda. If there was a African American Republican running, they’d promote her too. That allows them to be classified as nonpartisan.

We went to a polling place out on Beatties Ford Road. I saw that maybe 95% of the folks in line are African American. I had big flyers about the Sensational Six that I carried. This is what I did in the afternoon. 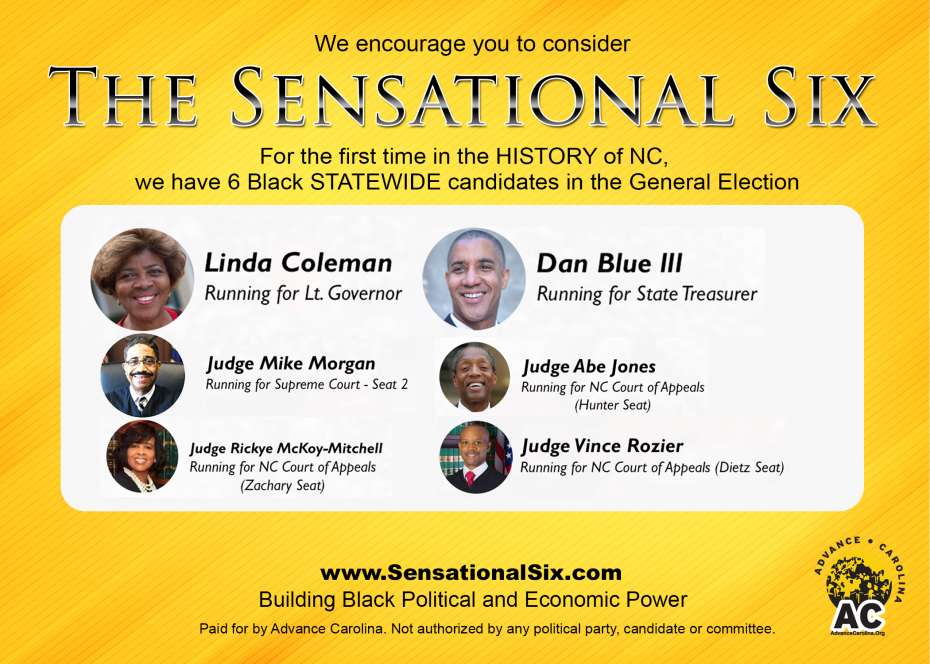 I’d go up and ask people if they wanted a flyer and if they wanted to know about the Sensational Six. I told them it was nonpartisan and it was about getting familiar with the candidates representing the African American community. It isn’t easy to know who represents your community when it’s only names on the ballot. 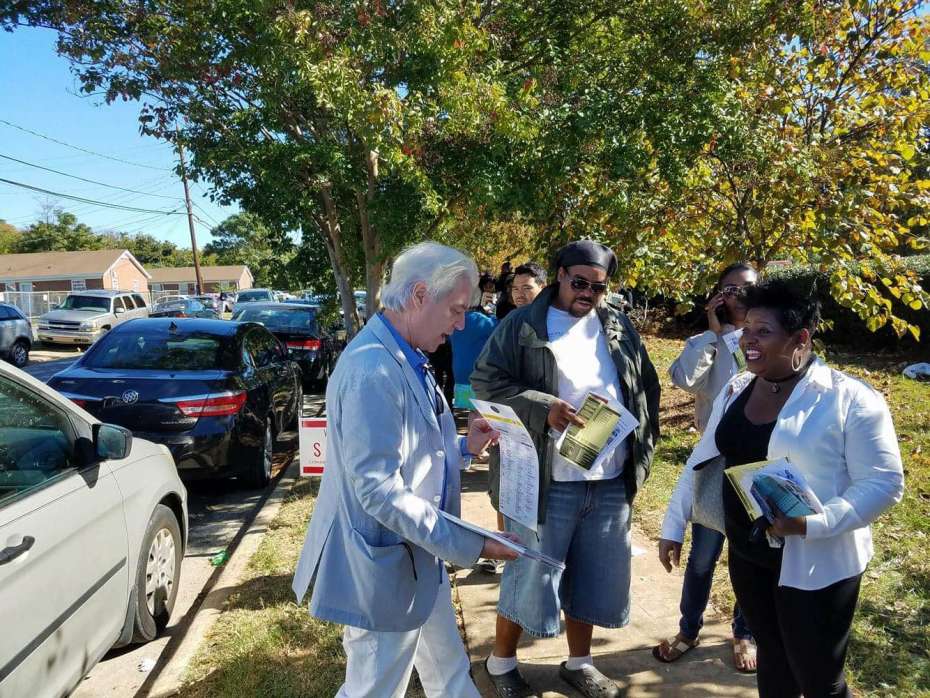 Here was this odd white man in a seersucker jacket and white jeans (I got a few compliments!) going up to African Americans who were in line to vote. I’m offering them information about candidates whom this organization gives the thumbs up to as far as representing THEIR community.

No one looked at me like “WTF?” or “Who are you?” (more than one friend has asked me, “why would they listen to you? why should they trust you?”) Mostly everyone was thankful for nonpartisan information and clarity. I thought, maybe they could sense that I felt passionately about this, about voting in general and about diversity being represented—maybe they could hear it in my voice? Everyone who was in that line knows how important their vote was, especially in North Carolina. They were willing to wait for often 1½ hours to have that voice be heard. It’s sometimes amazing what democracy means to people.

If folks are in line by 1:00 PM, when early voting on Saturday stops, they are guaranteed a vote no matter how long the line is. After that, they have to go vote at their home district on Tuesday, Election Day. The line was long. I barely had any Sensational Six flyers left at the end. It was uplifting and extremely moving to talk, even briefly, with everyone. We laughed and talked. There was a sense we are giving democracy our best shot. People have been disgusted by this election—but look, they are here, they are better than that. I sensed that when one deals with people as individuals and not as abstract groups or numbers our best instincts and common humanity comes through regardless of politics. It gave me hope. 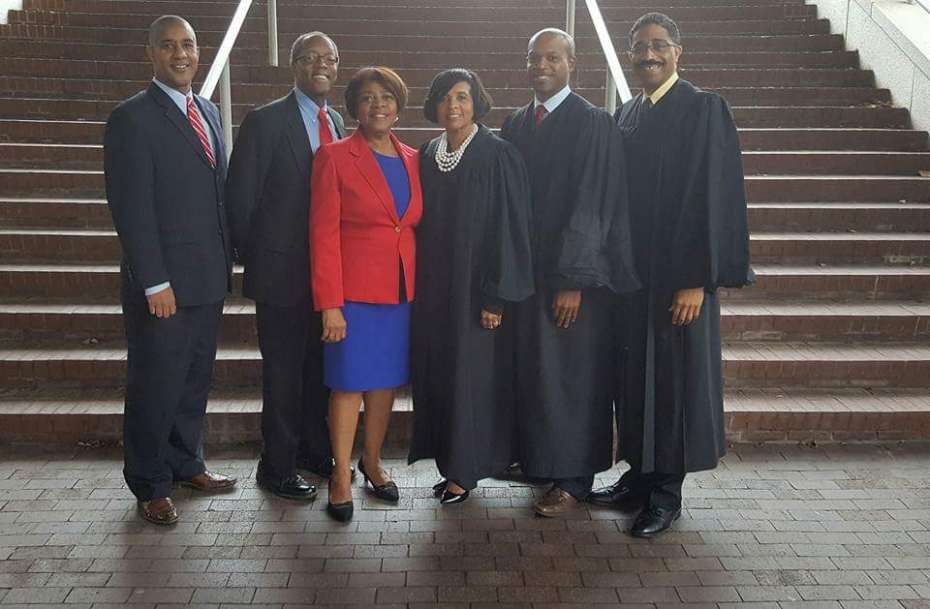