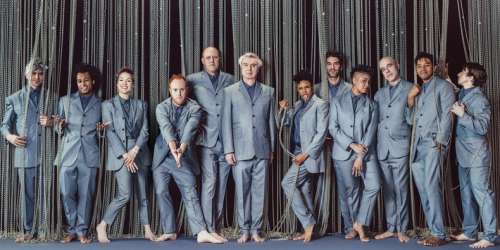 David Byrne is coming to Broadway. The American Utopia* event will open in a limited capacity at the Hudson Theatre on October 4 this year, officially begin on October 20, and run through January 19, 2020. There are also 18 preview performances at Boston’s Emerson Colonial Theatre from September 11 through September 28. Read Byrne’s description of the show and how it came to be on the American Utopia Broadway website.

The performance will feature songs from American Utopia, as well as material from Talking Heads and Byrne’s solo career. Byrne says the album was inspired by a tour with St. Vincent: “We had a large horn section that we decided should be completely mobile. Could I liberate the other instruments in the band as well for the new show? It turns out I could.... Because of how theatrical the show is, others started telling me ‘this needs to go to Broadway.’ Why not? But what did that mean? Parked in a beautiful Broadway theater we can perfect the sound, the lights, the movement. I thought to myself that this new context might be good—it might bring out the narrative arc a little bit more, to make it just a little more explicit.