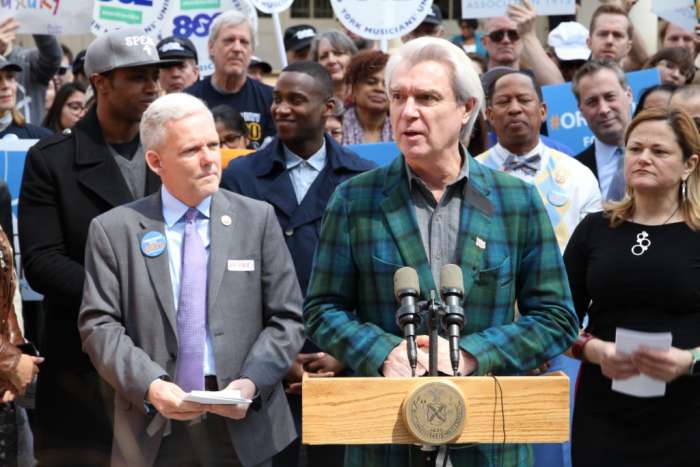 A capacity crowd of 400 rallied at the steps of City Hall in downtown Manhattan on Monday to speak out against proposed cuts to public funding of arts and culture by the Trump administration. A budget that Trump put forth in March would zero out funding for the National Endowment for the Arts, the National Endowment for the Humanities, the Corporation for Public Broadcasting, and the Institute of Library and Museum Services.

Speakers on Monday included Talking Heads frontman (and enthusiastic visual artist) David Byrne and Broadway actors Jelani Remy and L. Steven Taylor (Simba and Mufasa in The Lion King, respectively). Accompanying the demonstration were several musicians with brass and wind instruments, serenading the speakers from a nearby section of City Hall Park.

Local government was out in force, with Councilman Jimmy van Bramer, who emceed the event, starting things off with a fiery call to action. “Trump talks about ‘making America great again,'” he said, “but you don’t make a country great by crushing its soul.” He called Trump’s budget “an unprecedented and vicious assault” on the very idea of culture.

Byrne made an economic argument for public support of the arts, pointing out there’s a great return on investment in terms of jobs and tax revenues, and got laughs when he said, “You may hate the arts, but it’s complete stupidity to destroy this part of the economy.” 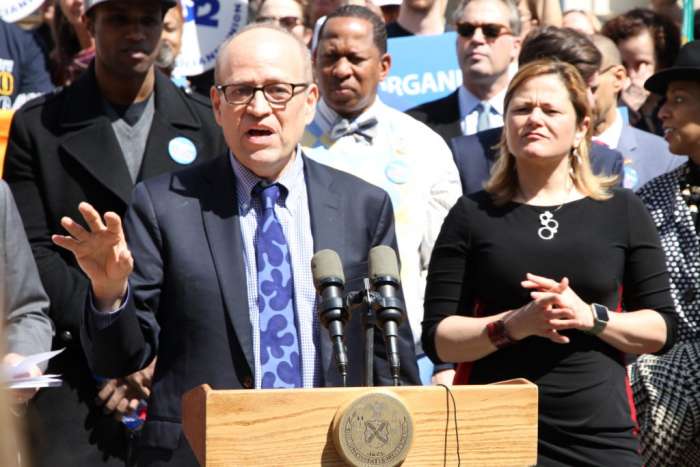 Tom Finkelpearl, Commissioner of the New York City Department of Cultural Affairs, managed to wring a laugh from the crowd as well, starting off by touting the city’s considerable culture budget and saying, “You want to be number one in everything, right? We are number two in funding of the arts. We do not want to be number one.”

Melissa Mark-Viverito, Speaker of the New York City Council, took the podium to single out art museums as a key part of her education when she arrived with her family as immigrants from Puerto Rico, and to call Trump’s proposal to eliminate culture funding “an attack on civilization.”

Also under threat is the Corporation for Public Broadcasting, which partially funds local station WNET. The television station’s president, Neal Shapiro, drew a connection between the livelihood of that public television broadcaster and that of arts organizations more generally when he pointed out that museums and galleries see a bump in attendance when the station reports on their exhibitions. 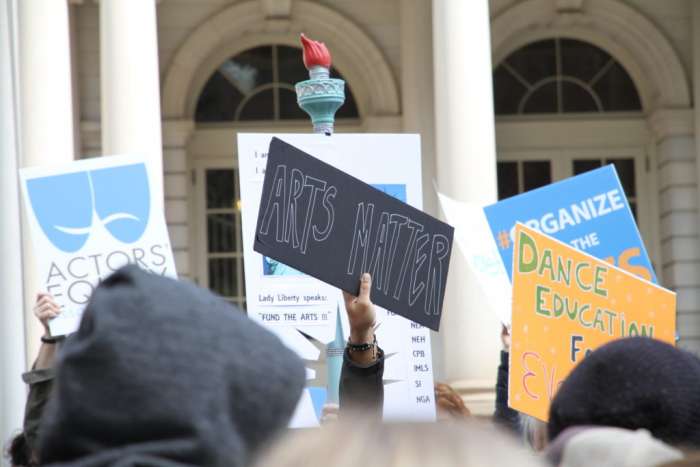 While many signs the demonstrators carried promoted the simple slogan “Save the Arts,” others sported more creative slogans, such as “Make America Kind Again”; “Save the Arts So the Arts Can Save You”; “Poetry is Not a Luxury”; and “A Work of Art is a Scream of Freedom.”

“Even Cavemen Valued Art,” read a sign by a demonstrator who wanted to be referred to as Michelle. “Even that far back,” she said, “people valued art for what it told us about who they were and how they wanted to be remembered.”