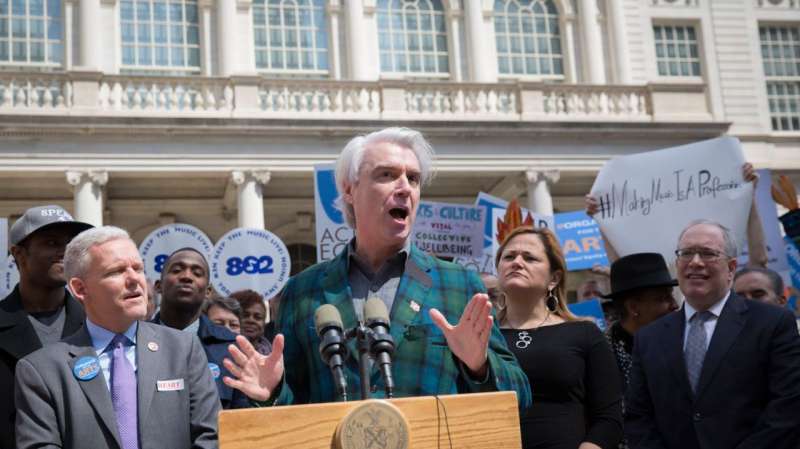 President Donald Trump has launched an assault on the arts, politicians, executives and artists, including Talking Heads founder David Byrne, said at a City Hall rally on Monday.

“The arts are, quite literally, responsible for saving my life,” said actor L. Steven Taylor, who plays Mufasa in “The Lion King” on Broadway. Taylor noted that as a child he was deterred from a life in the streets of his “underserved community” in Indianapolis after becoming spellbound by musical theater.

Byrne brandished an academic study that he said showed that arts programs in a community lowered child abuse by 14% and major crimes by 18%.

Investing in the arts “lowers crime and increases kids’ (academic) scores: It benefits us in all kinds of ways,” Byrne said. “The benefit to the economy is more than 100 times the investment.”

Comptroller Scott Stringer vowed to fight Trump’s plan to eradicate arts funding. “We shut him down on health care. We’re going to shut him down on the tax cuts,” and succeed in repelling his plans to zero out funding for the arts and humanities, Stringer said. “We have these fights once in a lifetime,” he said, alluding to a Talking Heads song, before shouting, “Let’s win this thing!”

Stringer had earlier released a report showing that NYC cultural nonprofits received $14.5 million in NEA grants in fiscal year 2016, and that 30 million tourists visited a cultural organization in 2015, spending $5 billion on arts, recreation and entertainment.

City Council member Jimmy Van Bramer condemned “an unprecedented and vicious assault on the arts, libraries and the humanities.”

His office said the arts account for more than 8% of the workforce in the city, employing more than 300,000 people. The proposed cuts don’t make fiscal sense, according to Van Bramer, who noted that the entire NEA budget constitutes a mere .003% of the federal budget.

While some artists may find inspiration enhanced by in extremis conditions, Byrne said he would not be writing any songs or shows about Trump’s attempt to erase all funding for the arts. “Some issues are better (addressed) in an Op-Ed piece,” he said.